Don't you understand that you are not supposed to have slumps? You've had a few, and each time it is equally painful for us to handle. 16 years of international cricket or not, you're still 32. How can you be done? 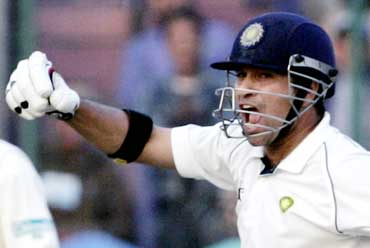 Our country has many gods - the Durga is not revered with the same vigour outside Bengal, while the Ganapati is Maharashtra’s elite deity. Muslims and Christians have their own God. We have appropriated the various avatars of the almighty and jealously cling to them.

But no one appropriates you. You belong to India - from every little town to the bustling metropolis.

We have many demands from you. Most of the times you’ve paid heed, but when you don’t, we cry in anguish. The only time our mothers ever stopped doing household work was when you walked in to bat. The one cricketer whose name all our mothers could remember was Sachin Ramesh Tendulkar.

Life has many experiences in store for us, but it leaves very few permanent imprints. Your exuberant celebrations after the final ball of the Hero Cup semi final, your feats amidst the Middle Eastern desert storm and violating the dreams of Shane Warne were such imprints. We grew up being fanatical about our little champion.

Our mothers have come a long way - these days they know most of our cricketers. Rahul Dravid, Sourav Ganguly, even Yuvraj Singh and Irfan Pathan have all occupied a chunk of our cricket euphoric minds. It is no longer fashionable to take less than 5 seconds to answer when asked who our favourite cricketer is. Do you feel slightly dethroned?

You needn’t be - your knock in the 2003 World Cup against Pakistan assured us: "Arre bhai, Sachin is Sachin."

You made your 35th test century 7 innings ago. You are perhaps feeling crestfallen at newspapers headlines such as "Endulkar". But don’t you understand that you are not supposed to have slumps? You’ve had a few, and each time it is equally painful for us to handle. 16 years of international cricket or not, you’re still 32. How can you be done?

Rahul Dravid has crossed your test average and Ricky Ponting is threatening your record of test centuries. More than you, this is a cause for worry for us. You have so much more to do - a certain Brian Lara still holds the record for the highest test runs. Your record suddenly looks mortal - whatever happened to Sunil Gavaskar’s prediction that you will leave the field with records impossible for anyone else to touch?

India - the land of a million deities - is suddenly one short. Our little master has gone missing. "God is back", hoped a journalist upon your explosive return to one-day cricket after injury. But obviously that was more a spark than a blaze.

When a batsman scores 163, the others are supposed to fade. But the 1,00,000-odd people at the Eden Gardens about eight years ago were deflating their lungs not at Mohammed Azharuddin, who had, admittedly, played a gem of an innings.

86 balls, 79 runs - 12 fours and 2 sixes. This was the majestic Tendulkar at his very best. Rahul Dravid must’ve felt dejected at the huge cheering that erupted at his dismissal after making a typically assured 86 off 150 balls. The crowd knew they had lost a star, but a master was about to take centre stage. That was the first - and only - time I saw you play live, and like the other 99,999 people, I was stunned.

I - and many others, I’m sure - pray that the sun has not yet set on our little champion. We hope that the drums and bugles will be back even louder. And we hope they will reach their crescendo at the Kensington Oval in Barbados next year at the highest stage cricket has to offer - the World Cup final. The writing will then be definitely on the wall- "The God of India has returned".

And the lesser mortals will again gape in pure admiration.

Aruni Mukherjee who sent us this open letter to Sachin Tendulkar is based at the University of Warwick, England.

Dravid Helped Our Cause