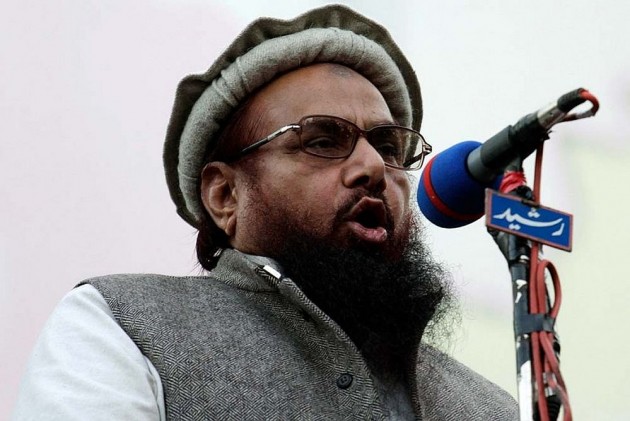 So we are back to the future with the “house arrest” of Hafiz Muhammad Saeed, the malignant head of the Lashkar-e-Tayyeba. As of now we have no direct knowledge as to why the Pakistan Punjab Province government took this step, so it becomes a bit difficult to analyse the situation. Perhaps there was American pressure, because Indian efforts have not yielded results.

The News of Pakistan claims that both American and Chinese pressure led to the present action, though the US pressure is not because of the present Trump administration, but its predecessor Obama Administration. (https://www.thenews.com.pk/latest/182810-JuD-chief-Hafiz-Saeed-put-under-house-arrest-sources)   Maybe like the last time around the whole thing is another farce designed to pull wool over our eyes. The Pakistani notification says that action is being taken as he under the watch list as per the sanctions under UN Security Council Resolution 1267 of 1999. Both the JuD and Hafiz Muhammad Saeed are specifically listed in the resolution. Under the resolution, Pakistan must seize their property and restrict their movement.

Saeed is, of course, desperately wanted by India for his role in planning the terrible terrorist attack on Mumbai on November 26, 2008 that took the lives of 166 people. In 2012, the US placed a bounty of $ 10 million on his head for his role in the killing of 6 American nationals in the Mumbai attack. Though he is the head of the founder and head of the LeT, he now claims that he is merely the head of the Jamaat-ud Dawa and the Falah-e-Insaniat Foundation. Now, Pakistani sources say he has renamed the JuD as the Tehreek-e-Azadi-e-Kashmir, to maintain the fiction that a) it operates outside Pakistani territory from the so-called Azad Kashmir, and b) that it is devoted exclusively to the Kashmiri “freedom struggle.”

It may be recalled that Hafiz Saeed had been placed under a similar house arrest in the wake of the Mumbai attack and was released by the Lahore High Court in June 2009. At the time the government appealed against the judgment, but in May 2010, the Supreme Court of Pakistan dismissed the appeals. Actually, Saeed was arrested even earlier in 2001 following the attack on the Parliament House in New Delhi. With India threatening military action, he was held till March 2002 and then arrested again for a couple of months following the Kaluchak massacre. It was at this time that under Musharraf’s orders, the parent organisation Markaz Dawa ul Irshad changed its name to Jamaat-ud-Dawa and Saeed distanced himself from the LeT. At the same time Musharraf ordered the LeT to shift its  operations to Pakistan Occupied Kashmir. The JuD made a name for itself in the relief work it did during the Kashmir earthquake of 2005 and subsequently spread its wings as a social welfare organisation, keeping its Lashkar-e-Tayyeba connections clandestine.

Following the Mumbai attack of 2008 and the enormous evidence accumulated by Indian and American officials on the complicity of the LeT in the massacre, Pakistani officials raided the LeT camp in Muzaffarabad, POK and arrested its Operations Chief Zaki ur Rehman Lakhvi and 12 other persons. A year later Lakhvi, Mazhar Iqbal, Hammad Amin Sadiq, Abdul Wajid, Shahid Jameel Riaz, Jamil Ahmed and Yonus Anjum  were charged by a Pakistani anti-terrorism court for helping execute the attack. However in December 2014, Lakhvi was given bail and despite the efforts of the Pakistani government, he was finally released from jail in April 2015. Most observers say that Lakhvi’s jailtime was spent in relative luxury and he retained his operational command of the LeT.

There is nothing secret in the connections between Lakhvi and Saeed and US national Daood Gilani aka David Coleman Headley said in his testimony to a Mumbai court early last year that he had been assured by his handler, the ISI official Sajid Mir, that nothing would happen to either Lakhvi or Saeed. (http://www.livemint.com/Politics/5ApmVuXJ6ULh9qLRg1hU7H/Nothing-will-happen-to-Zakiur-Rehman-Lakhvi-Hafiz-Saeed-h.html)

In his statement to the Indian authorities, Ajmal Kasab, the captured gunman who was subsequently hanged by India, said that Saeeed was personally present in selecting the terrorists for their attack and has visited them during their training. However, the issue has been clouded by the fact that Kasab formally retracted his confession, claiming that it had been forced.

Legal proof in terrorism cases is very difficult. After all terrorists don’t maintain minutes of the meetings in which they plan and organise their attacks. However, in the case of Saeed, he has openly broadcast his hatred for India and his intention of not just “liberating” Kashmir, but conducting jihad throughout India.

Dealing with Saeed will not be easy for Pakistan because the JuD and the FEI have established roots across Pakistan, especially in Punjab through their active social welfare works. In addition Saeed has been active in the Dife-e-Pakistan Council, an umbrella coalition of more than 40 right-wing religious outfits that support the Afghan Taliban and the closing of NATO supply routes to Afghanistan. They may not have widespread support in the country, but they still have a great deal of street power.

Given the past history of Saeed’s arrest and releases, it remains to be seen as to whether Islamabad is serious in shutting down the Lashkar/Jamaat outfit. It would require a great deal of political courage to do so. But more important, it would require the cooperation of the Pakistan Army and the ISI which have always maintained close links with the outfit. If that happens, it would mean the beginning of the strategic shift away from the use of state sponsorship of terrorism by Pakistan. But, as of now, it remains a big ‘if’.

(The writer is a Distinguished Fellow, Observer Research Foundation.)