This is not the first time that the Andhra police recovered rocket launchers, but the sheer volume of the recent recoveries is overwhelming. Meanwhile, official skullduggery and apathy continues apace. 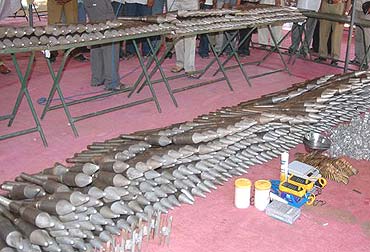 The sheer scale and expanse of the Maoist (also known as Naxalite) enterprise in India was revealed on September 8, 2006, when the Andhra Pradesh police in one of the largest-ever haul of weapons in the country, recovered 875 rockets, 27 rocket launchers, 70 gelatine sticks and other explosive material belonging to the Communist Party of India-Maoist (CPI-Maoist) from the Mahabubnagar and Prakasam districts. While 16 rocket launchers and 600 rocket shells packed in 53 gunny bags were seized at Jangireddypalli village in Mahabubnagar district, 275 rocket launchers packed in 27 bags were recovered from an unclaimed consignment in the Chennai-based Kranthi Transport Company, a private cargo mover, in the Giddalur town of Prakasam district. Further on, police at Vijayawada recovered 297 rocket shells and six rocket launchers from Autonagar on September 11.

Investigations revealed that parts of the rockets and launchers were manufactured at lathe workshops and foundries in the Chennai suburbs of Tamil Nadu at the Everest Engineering Company, Universal Casts and Bharath Fine Engineering, all located at Padi, Jai Tech Engineering Company and Shanthi Engineering Company, Korattur and Arun Engineering Company and Dhanalakshmi Foundry, Mogappair. According to Tamil Nadu Director General of Police, D. Mukherjee, a Maoist ‘technical wing’ member, identified as Srinivasa Reddy alias Raghu, came to Ambattur, another suburb of Chennai, in 2002 and gained the confidence of these companies by giving them small manufacturing orders. Thereafter, with their cooperation, he manufactured rocket components from 2003 to May 11, 2006. Later, these components were assembled and transferred to Andhra Pradesh.

Further, from the premises of Kranthi Lorry Transport Company at Ambattur, police recovered documents to the effect that three consignments had already been sent to Andhra Pradesh on August 10, 2005, May 6 and May 11, 2006. Police officials fear that the first consignment dispatched in August 2005, comprising approximately 600 rockets, may already have been distributed to Maoist cadres in other states as well.

This is not the first time that the Andhra police have recovered rocket launchers, but the sheer volume of the current recoveries is overwhelming. Some earlier recoveries include:

April 25, 2005: Police recovered crude rocket launchers among a huge quantity of arms, ammunition and explosive material from 13 Maoist dumps in Prakasam and three in Kurnool districts.

The Maoist quest for acquiring indigenously-made rockets launchers and shells were first conclusively demonstrated on May 6, 2003, when police recovered documents and design layouts for rocket launchers and mortars from an erstwhile People’s War Group (PWG) hideout on the Andhra-Orissa border. Officials said that the PWG had been working on the designs of the anti-tank Rocket Launcher M-1 of the US and the RPG-7 of Russian origin.

Apparently, the Maoists have kept working on developing rockets based on these designs arduously as, over the years, there have been incidents of crude variants of these being ‘test-fired’.

April 28, 2004: PWG cadres fired rockets at the Bandlamotu police station in Guntur district and the camps of the Central Reserve Police Force (CRPF) and the Andhra Pradesh Special Police (APSP) in Dornala and Markapuram area of Prakasam district. In all the three instances, the projectiles missed their targets by 30 to 100 feet. The projectiles were roughly 10 inches long, had a one-inch diameter and were fitted with four fins.

February 6, 2006: In Prakasam district, police exchanged fire with Maoists at Darabayalupenta for an hour in which the latter used rocket launchers. However, no casualties were reported in this clash.

July 29, 2006: The Maoists used rocket launchers to attack the Yedulla Bayyaram Police Station in Manuguru Police Sub-division of Khammam district. The Maoists had targeted the Police Station but the rocket missed the building and crashed into a tree, 300 metres away from the station.

Following the April 25, 2005, seizure of rockets from the Anantapur district, Director General of Police (DGP) Swaranjit Sen had stated that the Maoists were in an ‘experimental stage’ of using rocket launchers made with crude technology. However, the rockets seized in the latest recoveries of September 8, 2006, shows a marked improvement. The DGP observed that the new weapons were shoulder-fired, and they had a manual triggering system instead of the earlier versions that were electrically ignited. Also, the warhead and propellant shell, the fin covers, trigger guard and the percussion cap were all very finely chiselled on a high-precision lathe machine, giving it the look of a well-made weapon.

Across the spectrum of the Naxalite affected states, the weaponry traditionally used by the Maoists mainly consists of weapons either looted from the paramilitary forces and the police or manufactured locally. Looting of weapons from security forces and their installations has been the easiest recourse available for the CPI-Maoist to arm their cadres. In one of the major incidents of this nature, on February 6, 2004, according to police sources, the Maoists looted approximately 200 weapons from different police posts in raids of Koraput town. A PWG press release on this operation claimed, "weapons, ammunition, grenades valued at Rs 500 million were seized by the Naxalites of the People’s War. Among them there were 500 sophisticated weapons of different types (.303, LMG, SLR, Mortars, Stens, Revolvers, Pistols), along with more than 30,000 rounds of ammunition, number of Mortar shells and Grenades." Again, on February 9, 2005, the Maoists cadres attacked the National Mineral Development Corporation (NMDC) store in the Hirauli area of Dantewada district of Chhattisgarh and looted 17 rifles and close to 50 tonnes of ammonium nitrate, an explosive used to detonate iron ore mines. On November 11, 2005, over a hundred Maoist cadres attacked a home guard training centre at Pachamba in the Giridih district of Jharkhand and looted 183 rifles, two pistols and 2500 cartridges. Most recently, on March 24, 2006, following an attack on the Ramagiri Udayagiri sub-jail and other government establishments in Gajapati district of Orissa, the Maoists looted 25 self-loading rifles, a pistol, a light machinegun and an AK-47 rifle.

Apart from looted weapons, the Maoists gain appreciably from weapons manufactured locally. According to intelligence reports, the Maoists are getting weapons from unlicensed weapon factories situated in Chhattisgarh, Maharashtra, Jharkhand and Bihar, while in certain areas of north Bihar, the Maoists have opened their own weapon factories. In September 2005, the Sashastra Seema Bal (SSB) had conducted a raid in Ganauli forest area in West Champaran district of Bihar and recovered 42 locally manufactured 12-bore guns, a bolt action rifle and a large quantity of ammunition.

Easy availability of explosives at throwaway prices is another significant source for the Maoists. According to Inspector General of the Central Reserve Police Force (CRPF) K.T.D. Singh, each bomb explosion by Maoists targetting security forces costs them no more than Rs 500. All that the insurgents need to do is to buy gelatine sticks from mining contractors for Rs 20 each and a detonator at no more than Rs two.

Despite these assured sources, the Maoists have also developed a focused approach to upgrade their weaponry to outstrip the security forces. Technical wings, which employ Information Technology (IT) experts on monthly payment, have been set up to draw up plans to develop more potent explosives, tap governmental messages and access the latest techniques on guerrilla warfare. According to a report of the Jharkhand state Intelligence (Special Branch), two technical wings have been set up by the CPI-Maoist – a southern and northern zone, with each zone under the guidance of four experts at the top level.

This stress on upgradation is already bearing fruit at the ground level, both in terms of weapons and force multiplier technologies. In Andhra Pradesh, the Maoists have long possessed the technology to manufacture claymore mines and detonate these with remote control devices from a distance of up to five kilometers, making use of US-made Icom IC-V8 wireless sets. Earlier landmines had to be detonated from relatively close proximity using a camera flash connected to the mine by a wire. Following the arrest of a Maoist electronic and communications expert, Nimmala Anji Reddy, from Akkannapet railway station on March 6, 2006, it was also determined that the Maoists were able to listen in on police communications through improvised communication systems manufactured by in-house experts.

Again, in May 2006, the Visakhapatnam district police recovered pressure mine shells near the East Godavari border for the first time. According to Superintendent of Police V.V. Srinivasa Rao, the Maoists "seem to have copied the model that the U.S. Marines had used in Vietnam in the past. These mines will kill anyone who steps on them."

In comparison to the sustained acquisition and upgradation plans of the Maoists, official skullduggery in certain regions continues to impede the modernization of police forces. The Comptroller and Auditor General (CAG) of India’s report for 2005 pulled up the Jharkhand state government for diverting funds meant for modernisation of the Jharkhand Police. The CAG report revealed that the state-level Empowered Committee headed by the Chief Secretary purchased sports utility vehicles (SUVs) worth Rs 15.70 crore for VIP cavalcades during 2004-2005, using money meant for the police. The funds were intended for two projects: construction of police lines in Deoghar and Lohardaga districts and the replacement of condemned Police patrol vehicles.

At the 21st Coordination Centre meeting on Naxalism held on August 30, 2006, and attended by senior officials of 13 Maoist-affected states, an assessment was reportedly tabled suggesting that the Maoists were on the run in the southern states of Andhra Pradesh, Karnataka, Kerala and Tamil Nadu. This assessment appears to be based on declining levels of violence in the southern states, especially Andhra Pradesh. An objective assessment and effective counter-insurgency operation, however, demands that a number of other indicators be taken into consideration before proclaiming such dubious victories. The sheer availability of weaponry, the continuous operation and extension of Maoist extortion networks, and evidence of political and front-organisation operation across wide areas suggests that Maoist capacities have not been substantially eroded, and such an assessment is confirmed by the shock of the recoveries of the haul of weapons, projectiles and rocket launchers on September 8, 2006.

Caught In The Crossfire