Days After Protests, Another BHU Student Allege Molestation On Campus

According to the reports, the student has claimed that she was "dragged and slapped". 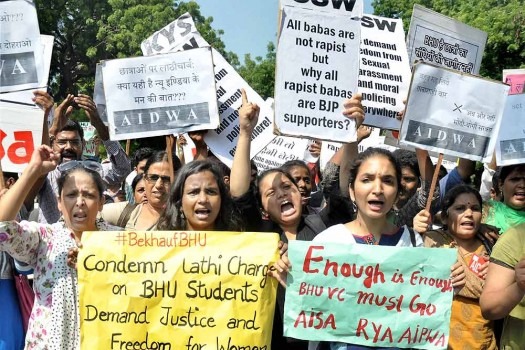 Merely days after Varanasi's Banaras Hindu Univerity (BHU) witnessed a series of protests triggered by cases of molestation, another student from the varsity on Thursday alleged molestation on campus.

According to the initial reports by News 18, the student has claimed that she was "dragged and slapped".

According to reports, girl student was heading to the chamber of a professor in faculty of science building when a student of MA (Public Administration) third semester student SS Gond caught her, thrashed her and later even damaged her phone.

Ironically, National Women Commission chairperson Rekha Sharma was there on the compus, probing into the cases of sexual assault on a girl that sparked violence, when the fresh assault took place,

A clash broke out between students and police on September 23 outside the BHU campus after police lathi-charged the students, who were protesting against alleged molestation of a girl.

An FIR was also lodged against 1,000 BHU students and several were asked to vacate hostels.

The National Human Rights Commission (NHRC) issued a notice to the Chief Secretary, the Director General of Police (DG) Uttar Pradesh and the BHU Vice-Chancellor seeking a detailed report on the matter and submits his response within four weeks.

The NHRC, in its statement, said, "Suo motu cognisance taken in the subsequent use of unwarranted manhandling and thrashing of agitating students, mostly women, by UP police."

However, the BHU administration had assured that an action would be taken against those found guilty as soon as the concerned committee probing the recent incident of molestation comes with its report.