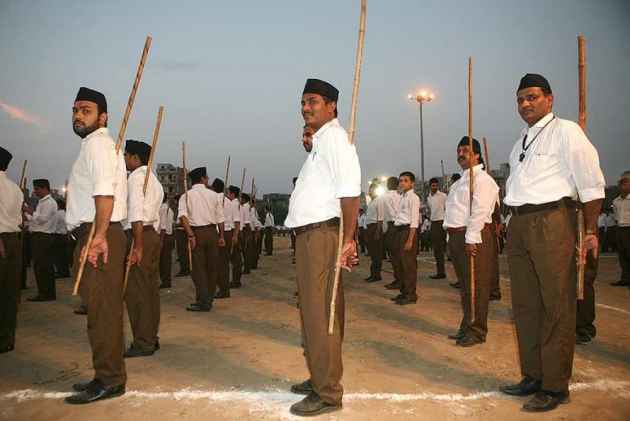 The ideologues of the RSS clan are working overtime to create a narrative of latter's participation in India's anti-colonial freedom struggle. This project got impetus after the electoral victory in 2014 of RSS/BJP which was celebrated as the return of the Hindu rule after 1000 years. While attempting it they are least bothered about the contemporary history as it unfolded and have no regard even for the facts available in the RSS archives. The latest to undertake this task is C. K. Saji Narayanan ('Don’t Foist Fear Onto Nationalism' in Outlook, February 5, 2018) who is more brazen to prove that RSS was in the thick of the freedom struggle.

Saji claims that founder of RSS, KB Hedgewar was a staunch nationalist, suffered imprisonment during the British rule and "directed all RSS shakhas to celebr­ate the Congress’s 1929 resolution on 'total independence' by hoisting the national flag on January 26, 1930, and spreading the message of freedom". He also tells us  that "during Quit India, RSS volunteers also gave their lives in the Chimur agitation in Vidarbha—while unfurling the freedom flag, an RSS volunteer was shot dead by the police…The fourth sarsanghchalak, Prof Rajendra Singh, too is known for having taken part in Quit India. Till independence, every swayamsevak had to take a pledge with the words “Desh ko swatantra kar” (free the country)". According to Saji many of the socialist and Congress underground leaders took refuge in the houses of RSS leaders, "Aruna Asaf Ali and Jayaprakash Narayan were housed in Delhi sanghchalak Lala Hansraj Gupta’s residence; Achyut Patwardhan and Sane Guruji were sheltered at the residence of Pune sanghchalak Bhausaheb Deshmukh; and Krantiveer Nana Patil at Aundh sanghchalak Pt S.D. Satwalekar’s house".

We are told that Hedgewar joined the call of the 1929 Lahore Congress that on each January 26, National Flag; the Tricolour should be unfurled publicly. RSS under the command of Hedgewar refused to follow it. Instead  he ordered on January 21, 1930 to all the RSS shakhas to worship "rashtriye dhwaj arthat bhagwa dhwaj (national flag i. e. saffron flag)". This order is available in a collection of Hedgewar's letter published by RSS titled Dr. Hedgewar: Patrroop Veyaktidarshan, published in 1981. In fact, RSS hatred for this symbol of the united freedom struggle of the Indian people was unambiguous. Just on the eve of Independence when nation was getting ready to watch Jawaharlal Nehru to unfurl it on the ramparts of Red Fort for the first time in history, the RSS English organ Organizer in its issue of August 14, 1947, denigrating the National Flag wrote that it would "never be respected and owned by Hindus. The word three is in itself an evil, and a flag having three colours will certainly produce a very bad psychological effect and is injurious to a country."

We are told that Hedgewar as RSS leader went to jail in 1921 and 1931 during Khilafat Movement and Salt Satyagrah launched by Gandhi. The fact is that both the times he went to jail as a Congressman as we will know from the RSS archives itself.

According to the biography of Hedgewar penned by HV Seshadri, published by RSS in English (1981) he was jailed for delivering an inflammatory speech in favour of the Khilafat Movement.  He was subsequently sentenced to one year’s rigorous imprisonment. There were two significant incidents regarding this jail term. First, Hedgewar touted as script disciplinarian hired a costly lawyer to defend him, thus openly violating the directive of Gandhi and the Congress that all those arrested would not offer defence. Secondly, despite one year’s imprisonment with hard labour in the Ajani Jail, on the day of his release on 12 July 1922, the same biography tells us "when he removed the prison uniform and tried to wear his old cloths, his old shirt and coat felt too tight! He had gained 25 pounds (11+ kilograms) in weight, in spite of the rigours of the prison life". It was first and last time in the history of the jailed freedom fighters that a political prisoner gained weight of more than 11 kilograms while serving the British jail. How it happened the clue is provided in this biography itself. He was on friendly terms with the ferocious British jailor, Sir Jathar.

The second jail term was the outcome of a plot. The Hindi biography authored by C. P. Bhishikar and published by the RSS discloses that Hedgewar ordered that "Sangh will not participate in the [Salt] Satyagrah". However, he joined the Satyagrah with an ulterior motive which was "that with a freedom loving, self-sacrificing and reputed group of people [of the Congress] inside with him there, he would discuss the Sangh with them and

win them over for its work.” It is clear that Hedgewar chose to go to jail this time not because he had faith in the cause but in order to break the ranks of the Congress cadres. Bhishikar admitted that after establishing RSS in 1925 Hedgewar "in his speeches used to talk only of Hindu organization. Direct comment on the government used to be almost nil".

The RSS Confession of Keeping Aloof from the freedom struggle

Non-cooperation and Quit India Movements (QIM) were two great milestones in the history of the Indian freedom movement and how nationalist Golwalkar hated these can be known by the following comments of his which are being reproduced from the collection of Golwalkar's writings (Shri Guruji Samagr Darshan, vol. 4 published by RSS): "Definitely there are bound to be bad results of struggle. The boys became unruly after the 1920-21 movement…But these are inevitable products after the struggle…After 1942, people often started thinking that there was no need to think of the law."

Admitting that RSS did not participate in the QIM he said: "At that time too the routine work of Sangh continued. Sangh vowed not to do anything directly. However, upheaval (uthal-puthal) in the minds of Sangh volunteers continued. Sangh is an organization of inactive persons, their talks are useless, not only outsiders but also many of our volunteers did talk like this. They were greatly disgusted too." However, there is not a single publication or document of the Sangh which could throw some light on the great work the RSS did indirectly for the Quit India movement.

According to Savarkar's collected works in Hindi (Samagr Savarkar Wangmaya published by Hindu Mahasabha in 1963) the fraternal organization of RSS, Hindu Mahasabha [HMS] led by the Hindutva icon, VD Savarkar went to the extent of running coalition governments with the Muslim League in Bengal, Sind and NWFP in 1942 when Congress was under ban and patriotic Indians were being shot dead for daring to carry the Tricolour. In Bengal Syama Prasad Mookerjee was deputy CM in the Muslim League ministry. Hindu Mahasabha also organized recruitment camps for the British army in India when Subhash Chander Bose was trying to liberate India militarily. RSS never expressed opposition to these anti-national activities of HMS.

Those Hindutva intellectuals who are busy constructing RSS role in the freedom struggle need to be honest to the pre-Independence RSS documents. Both Hedgewar (RSS chief 1925-40) and Golwalkar (1940-73), were opposed to the united freedom movement as its goal was an all-inclusive India. Golwalkar denounced the freedom struggle   (Bunch of Thoughts, 1966, RSS publication) as "territorial nationalism" which "had deprived us of the positive and inspiring content of our real Hindu Nationhood and made many of the ‘freedom movements’ virtually anti-British movements". It was this ideological commitment to building Hindu rashtr in India that apart from Hedgewar who went to jail as Congressman, Golwalkar, Deendayal Upadhyaya (prominent RSS cadre since 1937) and LK Advani (RSS activist since 1942) never participated in the freedom struggle.