Key members from arch enemy Arun Jaitley’s camp are expected to get promotions in the cabinet reshuffle on Tuesday. 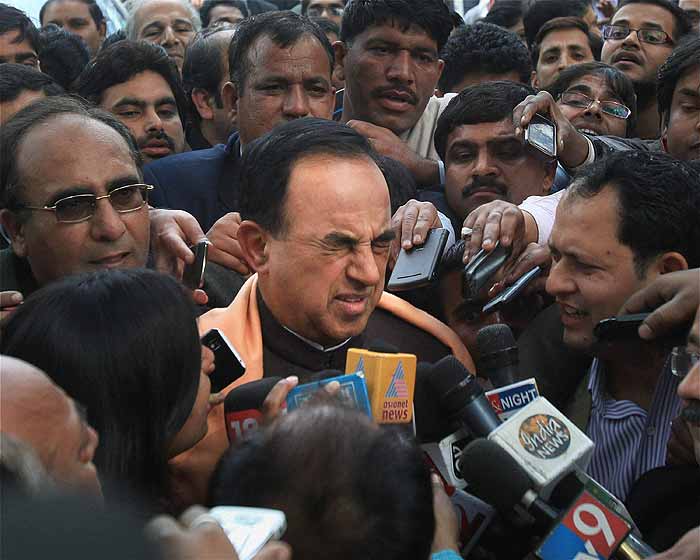 Tomorrow’s cabinet reshuffle will serve up a big snub to Subramanian Swamy, the maverick BJP Rajya Sabha MP who has been gunning for Finance Minister Arun Jaitley.

Indications are that MoS Piyush Goyal (power, coal and renewable energy) and Dharmendra Pradhan (petroleum) will be getting cabinet rank in the reshuffle on Tuesday morning. Both Goyal and Pradhan are perceived to be part of the Arun Jaitley camp. They have also grown in stature within the party establishment as go-to men for growing the party coffers.

The future of another Jaitley groupie – Nirmala Sitharaman, minister of state for commerce and industry – is yet unclear. She has cancelled an industry meet scheduled for Tuesday, fuelling talk among certain sections about a change in portfolio. Her supporters, in contrast, point to the recent FDI policy – unveiled by Modi in the aftermath of Reserve Bank governor Raghuram Rajan’s exit. If Sitharaman were to retain her portfolio, it would be a bigger victory for the Jaitley camp.

The buzz is that Jaitley, the artful survivor, will retain the finance ministry – this will only add to Swamy’s woes. He might however have to give up one of the other two ministries – corporate or Information & Broadcasting (in all likelihood, the latter). This means that Jaitley is still all-powerful, and a close confidante of Modi’s.

Jaitley has been upset at Swamy’s barbs on RBI Governor Raghuram Rajan, Chief Economic Advisor Arvind Subramanian, and secretary economic affairs Shaktikanta Das. Other members of the finance ministry – past and present – have not been spared in Swamy's vicious tweets.

Jaitley’s remark “enough” to Swamy’s barbs spoke volumes of the minister’s disillusionment with Swamy. In fact, it is said that Jaitley wanted Prime Minister Narendra Modi to intervene. In an interview to the Times Now, Modi indirectly snubbed Swamy without taking his name. He said, “such things are inappropriate…the nation won’t benefit from such publicity stunts…anyone who believes he is bigger than the system is wrong”.

On Rajan, Modi said that his “patriotism is no less than any of ours…Those who speak such language are doing great injustice to him”. In response to a query on hot heads making extreme comments, Modi asked the media to ignore such people and not make them heroes and they will stop. It is different that Swamy didn’t stop tweeting, but he hasn’t involved the Prime Minister in their fight.

What will Swamy do after tomorrow?

Meanwhile, with the reshuffle less than 24 hours away, some contours are emerging. A focus on Uttar Pradesh is expected in the reshuffle, given that elections in the state are due next year. Three names doing the rounds are OBC-Kurmi leader Anupriya Patel of Apna Dal, Brahmin leader Chandauli Pandey and SC leader Krishna Raj of Shahjahanpur. Streams of people kept visiting BJP president Amit Shah’s residence throughout the day.

Uttarakhand is also likely to get representation in the reshuffle and the name doing rounds is Schedule Tribe leader Ajay Tamta. As far as Rajasthan is concerned two new faces are likely to be inducted to MooS replace Nihal Chand and Sanwar Lal Jat. One of the new faces is likely to be MP Arjun Ram Meghwal.

Vinay Sahasrabuddhe’s name was doing the rounds as a new inductee to represent Maharashtra. However, it is learnt that a compromise has been arrived at and most likely Ramdas Athvale of Republic Party of India and Anil Desai of Shiv Sena will be accommodated. Two new faces from Madhya Pradesh are also likely to be inducted to curtail Congress’s social engineering in the state.

Some ministers are likely to be dropped. One name doing the rounds is MoS Ram Shankar Katheria who stirred a controversy over his alleged statement that Muslims should prepare for “final battle”.

However, the Agra MP will definitely be utilized for his strident Hindutva line in the run up to the UP elections.