In case you think making an art film is a bit of a jaunt, get rid of the idea. And if you somehow manage to make one, don't be too sure that you'd get to see it 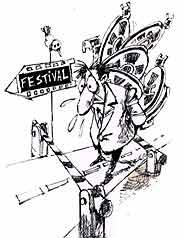 In case you think making an art film is a bit of a jaunt, get rid of the idea. I’ve watched my friends Ritu Sarin and Tenzing Sonam through each and every stage of their first feature film, Dreaming Lhasa, from initial idea and several draft versions of the script, through the pre-production (hard work) and shoot (ditto, but pleasurable) to edit and mix (harrowing) to the point they have now reached, which is that the film (a cool, laid-back but intense story about Tibetan exiles in Dharamsala), is now selected for three festivals: Toronto, San Sebastian and Pusan. This, then, is the part where you’d think things get easy. Clue: things don’t get easy, they just get weird.

First, there is the saga of the strap-line, the one-liner that adorns every movie poster, whether the film it’s advertising is far-out art or mainstream. The well-known London company handling the film internationally send R and T their marketing people’s choice. No good, too exotic and tacky. Some alternatives are ping-ponged back. No good, dramatic enough but negative, the hook needs to be positive. Finally, a compromise is arrived at: ‘Sometimes the key to your future lies in the past.’ Right. Then there’s the actual basic poster, which will become the platform for all posters worldwide. The London people design this. Again, the ping-pong ensues, it’s too garish, too simple, not dramatic enough, uh....okkkay, that one, fine.

Next comes the obstacle course of tickets for the festival screenings. In Toronto the tickets are apparently a lottery where you ‘apply’ for a cluster of films you want to see but can’t be assured of any of the films you choose. So relatives and friends flying in from as far as Hong Kong and the southern US can’t be certain they will see R and T’s film even if they go all the way. Next, a terse email from London: "The festival organisers say if you want to sit through your own film you will have to let us know." Huh?

As the dust settles on all this, our intrepid Delhi duo realises this is just the first festival. The next one, back to back, is the one in Spain, in San Sebastian, where they are hoping to have their cinematographer with them, that is, if he hasn’t taken his daughter off to Singapore to get her checked for dengue fever...