Caught In A Jehadi Vicious Circle

Caught In A Jehadi Vicious Circle

Recent jihadi anger against the British does not seem to be Iraq-related. They are more Afghanistan and Salman Rushdie related. The decision to award the Knighthood to Rushdie at this juncture does not speak well of the sensitivity in British officia

More from B. Raman
View All

Luck and quick foot-work by the Police have averted three planned jihadi attempts at mass casualty terrorism in the UK -- two in London on June 28-29, 2007, and one in the Glasgow airport in Scotland on June 30, 2007.

In the two incidents in London, cars packed with fuel, gas cylinders and projectiles had been taken to the scene of the planned terrorist strike and left there. For reasons, which are not yet clear, the explosive devices, planned to be remote-controlled, did not work. One of these cars was detected thanks to a timely tip-off from the staff of an ambulance van, who had noticed smoke or vapour coming out of the car. In the second incident, the unexploded device was detected by the Police in a car, which had been impounded for wrong parking. 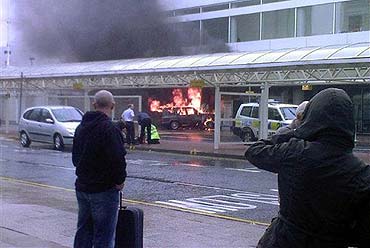 The incident in Glasgow-- possibly an Iraqi-style suicide attempt-- almost succeeded when a jeep filled a similar device of petrol, gas cylinders and projectiles, with two persons inside, crashed into the departure area of the airport. There was apparently no detonation. Otherwise, the impact of the explosion and the projectiles would have caused large casualties. There was only a fire, which caused material damage, but not human casualties.

The Police of London and Glasgow see a link between the three attempts. All evidence of the planned modus operandi point in that direction. Fortunately, the two persons in the jeep, which was used in Glasgow, are presently in Police custody--one of them with severe burns. Two more arrests have been made. These arrests should enable the police to determine whether these attempts were the outcome of a local jihadi initiative or were inspired from outside by Al Qaeda or any other organisation linked to it in the International Islamic Front.

The attempts had been well-planned, but badly carried out resulting in total failures in London and a part-failure in Glasgow. This would underline the possibility of these attempts having been more the outcome of a local jihadi initiative. The UK has been the target of jihadi anger since the invasion and occupation of Iraq by the US-led coalition in 2003. Initially, the anger was due to the role of the British troops in Iraq though it must be said to the credit of the British that there were no serious allegations of disproportionate use of force by the British troops against Iraqi civilians. Despite this, the London bombings of July, 2005, appeared to have been motivated by anger against the British role in Iraq.

The recent killing of Dadullah, a dreaded commander of the Taliban who was co-ordinating its operations in the Helmand area, has added to the anger against the British,the Canadians and the Germans. After the death of Dadullah, Mansoor Dadullah, who has succeeded him, has been saying repeatedly that the US, the UK, Canada and Germany will be made to pay a price in their respective homeland for the death of his brother. There have also been reports of jihadi recruits from the UK and other countries being trained by Mansoor Dadullah for suicide missions in the UK, the US, Canada and Germany. These reports have to be taken seriously.

The recent award of a Knighthood to Salman Rushdie, the controversial Muslim writer, has also added to the anger--but mainly in the UK and in the Indian sub-continent. There have been more acts of demonstrations and even acts of violence by Muslims against this decision in the sub-continent than elsewhere. This is due to his Indian origin. Even India's Jammu and Kashmir and the Pakistan-Occupied Kashmir (POK) saw major demonstrations against the British decision.

Muslim immigrants from the sub-continent-- with Pakistanis, including Mirpuris from POK, constituting the largest single group-- form the preponderant majority of the Muslim community in the UK. Sub-continental issues tend to afffect them and make the task of counter-terrorism more difficult to handle. The sub-continental anger over the Rushdie Knighthood is very likely to flow back to the UK, if this has not already happened.