Is car safety as simple as touch and feel? Does a car’s weight decide how safe it is? We separate fact from fiction 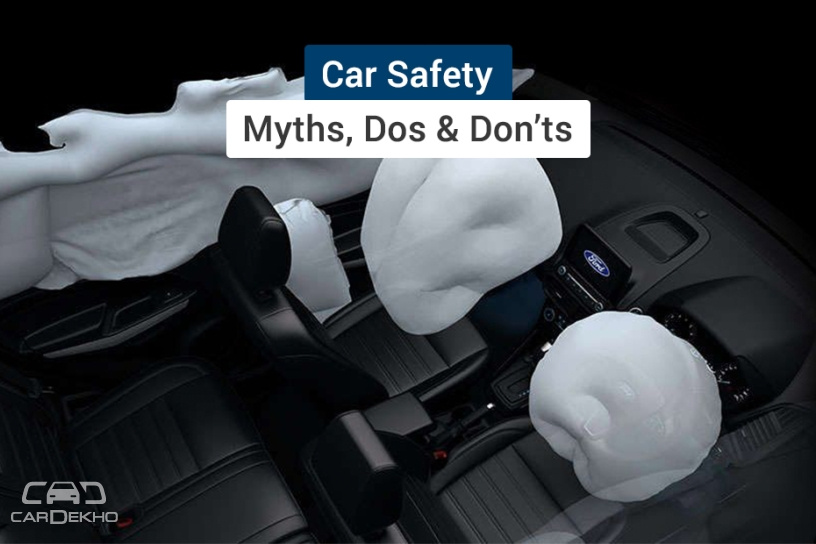 India has become a more mature car market over the past decade or so. While the traditional priorities of space, features and mileage remain strong as ever, safety is taking greater precedence than before. And it’s high time it did. As much as we’ve progressed, India still has a simply pathetic reputation for road safety standards. We currently average around 400 road accident related fatalities a day and if things don’t change, that number will only go up since car sales are only rising.

However, even though more people now prioritise safety, there is a great deal of confusion as to what makes a car safe. So, here’s a look at some car safety myths, along with some dos and don’ts if you’re looking to buy a safe car.

There is no doubt that a well built car makes you feel safe. Sheet metal that doesn’t flex or a strong thud when you shut the door are often taken to be signs of a well built car. However, while these characteristics do make the car feel tougher and more premium, standalone, they aren’t indicators of how safe a car is.

For example, the Fiat Punto was and continues to feel like one of the toughest cars in the segment. It certainly has the “Tijori” (vault like) build quality many appreciate, but in the 2017 Euro NCAP (New Car Assessment Program) crash tests, it scored a flat 0/5. Mind you, this car received a full 5-star rating when it was tested in 2012 (more on that later).

So even though the passenger compartment of the Punto remained stable in the frontal offset test, it scored poorly. The reasons? There were structures in the dashboard that “were thought to present a risk of injury to occupants of different sizes and to those sat in different positions.” Additionally, the data suggested weak whiplash and chest protection for certain occupants.

Now, look at the current-gen Swift. In terms of touch and feel, the Swift comes across as light and tinny. It is quite light too, weighing (as tested) nearly 200kg less than the Punto. However, it scored 3/5 in the same crash test. Yes, this car was better equipped as the version tested had six airbags (vs the Punto’s two) but the light and tinny-feeling build had no bearing on the car’s structural integrity.

Here’s the Euro NCAP quote for reference - “The passenger compartment of the Swift remained stable in the frontal offset test. Dummy readings indicated good protection of the knees and femurs for both the driver and passenger. Suzuki showed that a similar level of protection would be provided to occupants of different sizes and to those sat in different positions.”

So, while a light build may not give you the perception of safety, it is not a direct indication of how safe or unsafe a car is.

It is a very common myth that a heavier car is a safer car. The assumption is that the object with a greater mass will come out in a better shape in the event of a crash. This would hold true if literally ALL other factors remain the same but that’s never the case. Every accident has a unique set of circumstances, including the cars, their crumple zones, the point of impact, the total passenger load and even how the passengers are seated.

Take, for example, the Mahindra Scorpio, which scored 0 stars in the Global NCAP crash tests. This version had no airbags, which certainly affected the score, but it weighed 1943kg. More than a Mercedes-Benz GLS! Even so, its body shell was deemed unstable and incapable of withstanding further loadings. Contrarily, the Smart ForTwo, which weighs just 885kg, scored 4/5 stars. The structure was deemed stable and the primary reason for it not scoring 5/5 was weak chest protection in a side-impact collision.

A car may weigh more than average, but safety has to be engineered into its very design. The purpose of a car is not to save itself, but to save its occupants. Which is why, no matter how battered a car may look after an accident, always observe what shape the passenger cell is in. That is where car safety matters, after all.

Car Safety Is For The Motorist Alone

Almost 35 per cent of the total road fatalities in India involve pedestrians. While car safety is often filtered down to who is in the car, the reality is that roads have pedestrians all around them. This extends to other road users like cyclists as well.

Cars today also have to account for this vital safety facet which is why you may see some cars showing signs of damage more easily (dents, broken headlight lenses etc) even in case of low-speed impacts. However, these visual cues should not be taken as signs that a car is fragile or weak. In most modern day cars, the contact points are designed to take impact and absorb damage, in order to minimise the harm done to any pedestrians in the event of a collision.

Safety Standards Do Not Evolve

Remember the Fiat Punto mentioned earlier? It scored 5-stars when tested in 2012 but that dropped to 0 in 2017. Why? It’s because safety standards change with time and technology. As newer car safety tech enters the market, bodies like NCAP expect manufacturers to integrate them into their cars.

Autonomous technologies like emergency braking, lane-keeping aid and pedestrian detection, for example, decide if a car scores a full 5-star rating today. Hence, a car that scored well in the past, may not fare too well today. Another example is the Euro-spec Suzuki Swift. While the 2010 model scored a 5-star rating, the better equipped 2017 model (with the optional radar brake support system) only scored 4 stars. This doesn’t imply that the old Swift is safer than the new one, but that the new Swift is up against a more stringent testing criteria.

The expectations, in terms of features, performance and efficiency keep rising with time and advancements, and safety is no exception to this.

While we have made leaps in terms of car safety, determining how safe a car is remains a task that’s best left to the designated testing organisations. Assuming you know how safe a car is because of how it feels or how it looks in an image after a crash (without learning the circumstances of the crash) is incorrect and unscientific.

Now, here are some simple dos and don’ts when it comes to buying a safe car.

Have any thoughts on road safety? Share them with us in the comments below.