While didi stole the KKR felicitation show, the governor of West Bengal M.K. Narayanan announced: "This is the poriborton (change) that the chief minister had promised a year ago" 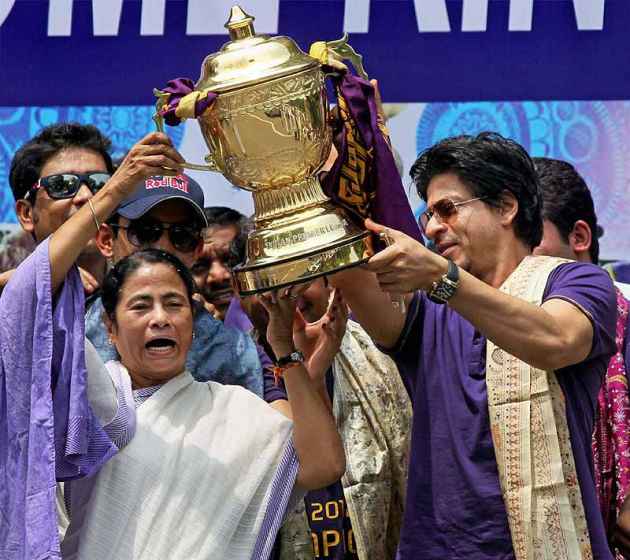 At midnight on Sunday May 27, when Kolkata Knight Riders snatched the IPL trophy from defending champions Chennai Super Kings, Calcutta, which watched the match on television, erupted in joyous celebration, bursting firecrackers and screaming “Korechi…Lorechi…Jeetchi.” (The KKR slogan "Korbo, Lorbo, Jeetbo" or "will do, fight and win” but now in the past tense to mean “did it, fought it, won it”.) Whatever be the euphoria Calcutta felt at that time, no one expected the Bengal chief minister herself to take an unusual interest in the whole matter and summon the entire team to Calcutta in order to felicitate them. But by midday of Tuesday May 29, it became clear that not only was she taking an unusual interest in the whole matter, but was also keen to be seen to be at the centre of things. So much so that we found Didi virtually taking over the management of the proceedings— from giving instructions to the players on stage to controlling the crowd on the ground. Though the word “circus” was being used to describe the spectacle that was unfolding, Didi herself was taking the whole thing very seriously. She even donned her trademark angry expression every now and then as she went about scolding and chiding press photographers and members of the crowd. The news cameras captured her furiously gesticulating to Commissioner of Police R.K. Pachnanda, who scuttled away not knowing exactly what he was expected to do or why exactly he had to do it. She was also seen giving instructions to Chief Secretary Samar Ghosh, who looked bewildered and perplexed. “This attempt to look serious was rendered more ridiculous by images of Bolly and Tolly stars jumping around to the tunes of Bhoomi and Chandrabindoo’s who sang “Dhitang Dhitang Boley,” a spectator pointed out. Cameras also captured chaotic scenes outside. In fact, a stampede of sorts both preceded and followed the ceremony, with a one lakh-strong crowd thronging the premises.

The governor of West Bengal M.K.Narayanan— a man of few words who is not known for putting his foot in the mouth— during this felicitation ceremony had announced: “This is the poriborton (change) that the chief minister had promised a year ago.” I would think that anyone hearing those words would believe them to be tongue-in-cheek and ironic rather than take them at face value. I mean, come on…could a no nonsense man like him actually mean that the tamasha or spectacle that was playing out before him was the poriborton that Bengal was promised, without being just a little bit caustic? In fact, I thought it was a remark loaded with sarcasm. So I am very surprised to find that instead of cherishing the comment, leaders from opposition political parties are condemning it. CPIM central committee member Shyamal Chakraborty said, “Such political comments do not suit the governor of a state since he is a central observer and supposed to be neutral in his approach. Even the TMC government’s coalition allies objected to the governor’s comments. “The governor’s remarks are unfortunate,” said West Bengal Pradesh Congress Committee President Pradip Bhattacharya. “There is no need for him to get into all this. The governor is supposed to be an impartial institution, whereas the IPL is a fully commercial event.” Perhaps realizing that everyone had missed the point, Narayanan later issued a clarification, saying, “I was only referring to KKR’s victory when I referred to poriborton.”

I had made an urgent and earnest plea to at least two Calcutta mayors— former mayor Bikash Ranjan Bhattacharya during the Left rule and now to incumbent mayor Sovan Chattopadhyay. “Please do something about the spitting problem in Calcutta,” I said, squeezing in this personal request during a professional interaction. Yes, it was a personal request but I think I speak on behalf of a large number of fellow Calcuttans who would like to see spitting in public spaces banned. Our streets are perennially splattered with spit and it is disgusting. “Yes, it’s a nuisance,” they both agreed. But both said it would take time to do away with it. Why not create awareness of the health hazards of spitting? I had eagerly suggested. They both said it was on their list of priorities. In fact, an existing law does allow civic authorities to fine offenders who create “public nuisance” but this is by an large unimplemented. This week, officials of the Kolkata Port Trust, which maintains Howrah Bridge, said that they have decided to install fibreglass covers at the base of the bridge’s 78 pillars to prevent corrosion of the hanger-hoods of the bridge caused by indiscriminate spitting. “Collective spitting by commuters after eating paan and gutkha is having such a bad effect on the health of the bridge that the thickness of the steel hoods protecting the hangers have reduced by 50 percents from their original size,” Kolkata Port Trust chief engineer AK Mehra reportedly said. This is the story of Calcutta. Instead of trying to eradicate mosquitoes, they will recommend the use of mosquito nets. Instead of abolishing spitting in public spaces they will put up spit-guards. On the other hand there are states like Bihar, which this week became the third state to ban gutkha and paan masala, the first one being Kerala.

Delhi-based Green Room Theatre brought to Calcutta their charming Bengali play, Ashukh. I watched it last Saturday and was moved by how the complex theme of an individual’s inner conflicts between good and evil was brought out with a simple story of a theatre group and the interactions and relationships between its members. “Ashuk”, literally means, “Sickness,” but is here used metaphorically to convey a corrosive human propensity to dwell in its basest state in spite of the ability to rise above and aspire for higher existence until that tendency wreaks destruction. Monoranjan (played by Anjan Kanjilal) has been catapulted to international fame as an actor and theatre director by sheer dint of his hard work and dedication but instead of cherishing his success he nurtures resentments against those who had “sneered” at him on this road to success because of his underprivileged background. They include, among others, his wife, Jhuma (Neelanjana Banerjee) and her mother, Mitali (Shampa Das) and Shekhar Dutta (Sukhanghsu Chatterjee), who incidentally is his mentor as well as the creator of the theatre group which propelled him to fame. Through an entertaining plot, replete with humour, songs and flashbacks— using a range of techniques including dialogue and even projector screens— and a linear narrative each of the of the characters’ inner dilemmas are dragged out, dissected and dealt with. And all this without a hint of didacticism. Like in life itself, these characters, or individuals really, have the ability to fight their own inner devils. You have to watch the play in order to find out whether they do or not. But here is a clue: it’s a happy ending.

West Bengal’s credit to deposit ratio has always been poor compared to the rest of the country. Credit to deposit ratio signifies the total percentage of credit delivered by a bank at any given point of time to the total deposit accumulated by them during the same period. While most other states had an average credit to deposit ratio of 75 per cent, West Bengal only had 65 per cent. As if that was not bad enough, the last fiscal year (2011-2012) the credit to deposit ratio has come down by one basis point and is now hovering at around 64 per cent. This was conveyed to the state government at a meeting between Amit Mitra, state finance minister, and Bengal bankers. When Mitra expressed his unhappiness over the figures, the bankers politely told him that the reasons for the fall in credit to deposit ratio were many, but the chief among them was lack of big investment. This is a sensitive point for the state government which has often been accused of driving industry away because of their anti-land acquisition policy, to speak nothing of the high profile Singur episode. Eventually Mitra is reported to have decided to convene another round of talks next week with bankers to try and improve the figures.

Written Behind an Auto