“Get into the car. Hurry,” said a voice from inside the car. And the face that peered out of the window was none other than the Chief Minister’s. 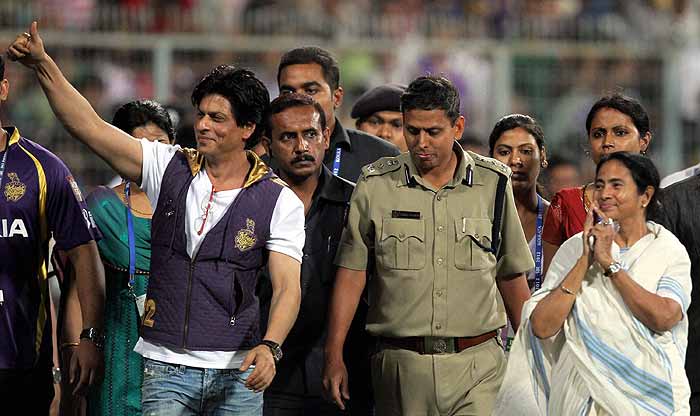 The Home, the Heart

Cricket-crazy Calcutta thronged to the Eden Gardens stadium for the second IPL match this season which had home team Kolkata Knight Riders pitted against the Delhi Daredevils on the evening of April 5. A crowd of close to 67,000 spectators turned up to watch the match in spite of the stormy weather. Of course, I’m not complaining. Because I think watching a storm brewing – magnificent grey clouds gathering over the vast horizon of the cricket grounds bringing gusts of cool wind, the distant rumble of thunder and the flashes of lightening ripping through the sky – is an amazing experience. In fact, like the match itself the storm was the second this season of Kaalbaishakhis or Norwesters. It swept through the stadium, followed by an April shower. Not many share my love of storm and rain and certainly not on a day they spent good money to watch cricket. They waited impatiently for the storm to pass, the rain to stop. But it was worth the wait…or rather the wait was worth it. Because the wait period saw Chief Minister Mamata Banerjee with none other than Bengal’s new brand ambassador Shah Rukh Khan climb down from their enclosures and strut across to the cricket ground and do a lap together, thanking the cheering spectators for staying on. Finally the match started…around 10 pm. The Delhi Daredevils won. They scored 100 runs for 2 in less than an hour and KKR scored 97 in less than an hour but lost 9 wickets. However, KKR won the hearts of Calcutta’s spectators for no other reason than it was the home team. Home, after all, is where the heart is.

One in a Million

If chief minister Mamata Banerjee was thus saving the day – or evening as it were – when the season’s second storm struck Calcutta, what do you suppose she was doing when the first Norwester hit the city a day earlier? It was the evening of April 4. Calcutta was reeling under the relentless sweltering heat of the past few weeks, when suddenly strong gusts of wind started blowing across the city at close to 96 kilometres an hour. The speed of the wind came close to the Cylone Aila’s 110 kmph and though didn’t last for as long and therefore did not create as much havoc, during the storm trees got uprooted and those who were outdoor and caught in it, had a harrowing time as they scrambled for cover.

A man named Amit Mukhopadhyay was helplessly standing at the side of the road, along with his wife and infant, not knowing what to do. Trees were swaying wildly around them. Snapped electric lines were dangerously hanging above their heads and then came the torrential rain. The road was deserted. Not a taxi in sight. Not even a bus. Suddenly from a distance they say a car appear. It was a black Santro. The Mukherjees were surprised when it pulled up and stopped in front of them. “Get into the car. Hurry,” said a voice from inside the car. They were more surprised when they saw the face that peered out of the window. It was the Chief Minister’s. Mamata Banerjee doesn’t use a government car. She travels by her own, without sirens or flashing red lights. 10 months since she came to power and her performance as chief minister has been subjected to a great deal of criticism. However, few will deny that when it comes to setting an example in simplicity and honesty, she is one in a million. Some like to believe that this is mere pretension and by eschewing her privileges she is trying to create an image. But this is easier said than done.

If it was not genuine, if it was an effort, she wouldn’t have been able to sustain it, day in and day out. Anyway, on that stormy, rain-lashed night, the chief minister had the couple and their baby dropped to their house on the other side of town in her car. Now, there’s a gesture that even the opposition can find no fault with.

Sunshine on the Anvil

Surya Kanta Mishra, whose name means sunshine in Bengali, is the leader of the opposition in the Bengal Assembly. Lately, his name has been coming up in connection with the CPI(M)’s face in Bengal. Considered an effective opposition leader, he is well-liked by his party colleagues. There has been talk about pitching him as the chief ministerial candidate in the next assembly elections. Especially since former chief minister Buddhadeb Bhattacharya has been expressing the desire to even relinquish his Politburo membership. He is not even attending the on-going party congress of the CPI(M)’s party at Kozhikode on grounds of ill-health. Party general secretary Prakash Karat is known to have differences with Buddhadeb Bhattacharya, which became pronounced during the CPI(M)’s abysmal performance in Bengal with each holding the other responsible. While Karat tried to play up the role played by Buddha during Nandigram as the key reason for the CPI(M) debacle in Bengal, Buddha was convinced that it was Karat’s decision to pullout of the UPA which brought Mamata Banerjee into the picture and Karat’s floating of the Third Front which caused the downfall. While some of his comrades in the Bengal cadre have told Karat during the Kozhikode conference that Buddha should be kept on at least as an honorary member of the Politburo, Karat is said to be not so keen on doing that. He urged all to be patient for the next three days, when the party congress wraps up and the new Poliburo and Central Committee is formed.

If Surya Kanta Mishra and others are known for their oratorical skills, an asset for any legislature, some make up for the lack of it by other talents. Just as Anup Ghoshal did by using his musical skills. The veteran singer, who was Satyajit Ray’s discovery and sang in a number of his films including the classic children’s trilogy of Goopi Gyne Bagha Byne, Goopi Bhagha Phirey Elo and Hirok Rajar Deshey, won his Assembly seat on a TMC ticket in the 2011 elections. Not a gifted orator, he found that hardly anyone was listening while he was delivering a brief speech during the Budget session. That’s when he decided to do something about it. And he did what he does best. Sing. It goes without saying that he commanded the rapt attention of everyone in the House both from the Treasury benches as well as the Opposition when he started singing “Tujhse naraaz nahin hain zindagi, hairaan hoon main” – that memorable song from the 1983 movie Masoom. After that, making himself heard was a song.