But What Do They Preach?

The Tablighi Jamaat is once again in sharp focus: is it the recruiting ground for wannabe Islamic terrorists? Or is it, as it claims, completely apolitical and law abiding? No matter what, it would have to remain under the scanner... 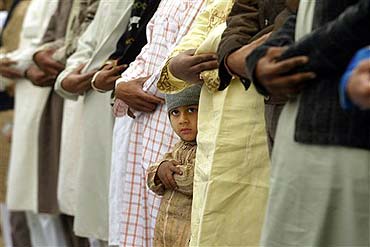 The Tablighi Jamaat ("group of preachers") has been in the limelight since 9/11 for all the wrong reasons. Britian’s MI5 and America’s FBI have been alleging that it is the recruiting ground for wannabe Islamic terrorists. The organization has once again come into sharp focus after the recently foiled plot to blow up transatlantic airliners. UK’s security services have found that at least seven of the 23 suspects under arrest on suspicion of involvement in the transatlantic airliners plot may have participated in Tablighi events. The organisation was also found to be linked with two of the July 7 suicide bombers. The jailed shoe bomber Richard Reid had supposedly attended its sessions.

In their defence, the Tablighis completely disavow any links from anything other than Islam. The Guardian ("Inside the Islamic group accused by MI5 and FBI", Augsut 18) reported a Tablighi defend the organization in these words (when asked about the association between Tablighi Jamaat and terrorist groups): "Tablighi is like Oxford University. We have intelligent people - doctors, solicitors, businessmen - but one or two will become drug dealers, fraudsters. But you won't blame Oxford University for that. You see, it does not matter if someone speaks in favour or against this effort. Everything happens with the will of God."

Though Olivier Roy, the French scholar on Islam, has described Tablighi Jamaat as "completely apolitical and law abiding," is it really an innocuous religious organization as is claimed by its followers? Or is it a silent and hidden breeding ground of Islamic terrorism? To assess this, we need to look at its background and activities.

The Tablighi Jamaat was an offshoot of the Deoband movement and it represented a commitment to individual regeneration apart from any explicit political program. According to American scholar Barbara Metcalf, the movement began in the late 1920s when Maulana Muhammad Ilyas Kandhlawi (d. 1944), whose family had long associations with Deoband and its sister school in Saharanpur, Mazaahiru'l-`Ulum, sought a way to reach peasants who were nominal Muslims being targeted by a Hindu conversion movement.

The basic strategy of the movement is to persuade Muslims that they themselves, however little book learning they had, could go out in groups, to remind the lay Muslims to fulfill their fundamental ritual obligations. Participants were assured of divine blessing for this effort. Tablighis not only eschewed debate, but also emulated cherished stories, recalling Prophetic hadith, and of withdrawing from any physical attack. A pattern emerged of calling participants to spend one night a week, one weekend a month, 40 continuous days a year, and ultimately 120 days at least once in their lives engaged in tabligh missions. The thrust of the movement is not clearly on conversions but on bringing the "wayward" Muslims back to the fold of practicing Islam.

This does not mean that all is well with the Tabligh movement. Its ambitions might be noble but sometimes it harms the interests of the Muslim community in no ambiguous terms. This may not be deliberate, but it nonetheless has deleterious effects.

And now with the Jamaat’s emphasized association with terrorism, it is facing its strongest moment of criticism, though it has been on the radar for some time now. Alex Alexiev, in his paper "Jehad’s Stealthy Legions" (The Middle East Quarterly, Winter 2005) had noted that the "West's misreading of Tablighi Jamaat actions and motives has serious implications for the war on terrorism." He argued that Tablighi Jamaat has always adopted an extreme interpretation of Sunni Islam, and in the past two decades, it has radicalized to the point where it is now a driving force of Islamic extremism and a major recruiting agency for terrorist causes worldwide.

For a majority of young Muslim extremists, Alex Alexiev pointed out, joining Tablighi Jamaat is the first step on the road to extremism: "Perhaps 80 percent of the Islamist extremists in France come from Tablighi ranks, prompting French intelligence officers to call Tablighi Jamaat the "antechamber of fundamentalism". He also quoted American counterterrorism officials: "We have a significant presence of Tablighi Jamaat in the United States," the deputy chief of the FBI's international terrorism section said in 2003, "and we have found that Al-Qaeda used them for recruiting now and in the past."

Ziauddin Sardar, a British journalist and writer, describes his experience of the Tablighi Jamaat: "So here was the essence of the Tablighi approach. Observance of religious practice was a quid pro quo with the Almighty, one merely applied the ready-made formula and one could relax, confident in the assurance that paradise would be the outcome, the consummation of a life-time of duty done. It seemed the Tablighis neither offered nor considered they had to do anything particular about rampant injustice, the horrors of suffering and neglect that formed the circumstances and deformed so many lives in country after country, the Muslim world especially." (Desperately Seeking Paradise: Journeys of a Sceptical Mulsim, p. 12)

Looking at the flip side of Sardar’s observations, the problem with the Tablighi approach is precisely this: they can inculcate in their followers so much of a sense of otherworldliness that they may as well begin to fall prey to the suicide bombing recruitment spiel. Tablighis live and breathe in the real world and those who feel that Muslims are being persecuted in the hands of Western or west-supported hegemonies, might as well turn towards violence and murder as a means to attain a piece of the promised paradise. This is especially true for the young and the impressionable, the Shahzad Tanweers of UK and other western societies.

The western policymakers need to tread a fine line in order to deal with the Tablighi Jamaat. It may not necessarily attract a blanket ban, but being the possible ground for the first step on the road to extremism, it certainly warrants some rethinking and attention on the part of the Muslim community and the government agencies. A ban might be counterproductive, but neglecting it would be akin to acting like an ostrich.

Zafar Anjum is a Singapore-based journalist. These are his personal views.