Why Paytm’s Parent One97 Communications Stock Price May Fall Further

Paytm’s parent company One97 Communications is down by over 40 per cent from its IPO price, while investment Banking firm Macquarie has reduced its target price to Rs 900. Here is why?

January 10, 2022, was not a good day for Paytm’s parent company One97 Communications Limited. While its stock an all-time low of around Rs 1,157, its target price got downgraded by investment banking firm Macquarie.

Paytm’s parent company One97 Communications Ltd has been on a downward spiral right from the day of its debut in the stock market. The stock fell over 27 per cent on its debut day on the bourses. Since November 18, 2021, the stock has fallen over 40 per cent as compared to broader market indices Sensex and Nifty, which are down 1.27 per cent and 1.34 per cent, respectively, as on January 10, 2022. 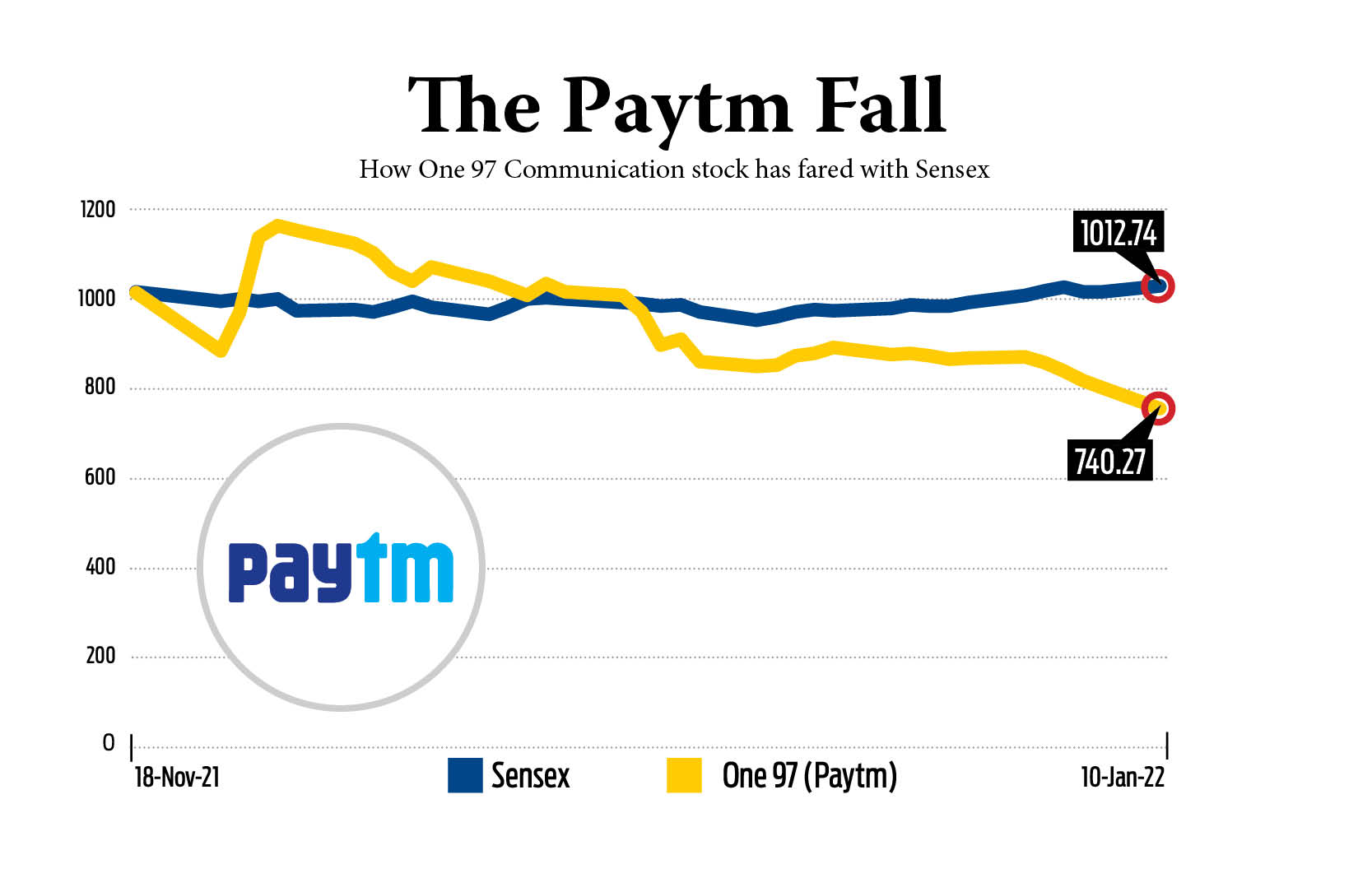 In a report titled Sign Of Headwinds Abating, which was released today, Macquarie has reduced its target price further to Rs 900.  This price is around 25 per cent below the earlier target price of Rs 1,200.

Macquarie in its earlier research report, Too Many Fingers In Too Many Pies, released on Paytm’s listing day, wrote, “Paytm’s business model lacks focus and direction.” The report has termed the company “a cash guzzler” and has raised doubts on its scale and profitability.

In the latest report, the firm has cut earnings per share (EPS) estimate by 16-27 per cent due to lower revenues and higher employee and software and cloud expenses. “We believe our revenue projections, particularly on the distribution side, is at risk and hence we pare down our revenue CAGR (compounded annual growth rate) from 26 per cent to 23 per cent for FY21- 26E. We are roughly cutting revenue estimates for FY21-26E on an average by 10 per cent every year due to lower distribution and commerce/cloud revenues offset partially by higher payment revenues. We cut our earnings (increase our loss projections) by 16-27 per cent for FY22-25E owing to lower revenues and higher employee and software expenses. We cut our TP (target price) sharply by ~25 per cent owing to a lower target multiple of 11.5x (price to sales ratio) (from 13.5x earlier) and lower sales numbers. Maintain UP (under-performer) with a revised TP of Rs 900,” says the report.

The report says that the Reserve Bank of India’s (RBI’s) proposed digital payments regulations could cap wallet charges. The payments business still forms 70 per cent of the overall gross revenues for Paytm and, hence, any regulations capping charges could impact revenues significantly. Add to that, Paytm’s foray into insurance was recently rejected by the Insurance Regulatory and Development Authority of India (Irdai). We believe this could impact Paytm’s prospects of getting a banking licence.

Senior management attrition is another cause of concern for the firm. The report highlights senior executives have been resigning from Paytm which is a cause of concern and could impact the business if the current rate of attrition continues. The company has seen top three executives—Abhishek Arun, chief operating officer (COO), Paytm Payments Bank, Renu Satti, COO, offline payments and Abhishek Gupta, senior vice-president and COO—resign in the recent past, according to media reports.

In the past 12 months, Paytm’s average ticket size for loans disbursed has been consistently coming down and stands at sub-Rs 5,000 levels. “At this size, we don’t think it is doing many merchant loans and most of the loans are small value BNPL loans. Hence the eventual distribution fees realised by them are likely to be much lower than our earlier estimates,” says the report.

The shrinking revenue might be a cause of concern for fund managers. Recently HDFC Mid-Cap Opportunities Fund sold all Paytm shares and HDFC Balanced Advantage reduced exposure to the company by over 91 per cent. It is to be seen how other fund managers react to this report.

HDFC MF was among several anchor investors, including other mutual funds, that bought Paytm shares during the initial public offer (IPO) in November 2021. Four fund houses had invested Rs 1,050 Crore in One97 Communication IPO as anchor investors through 18 mutual fund schemes.