This is the sharpest contraction since quarterly figures started being published in 1996 and worse than what was expected by most analysts. 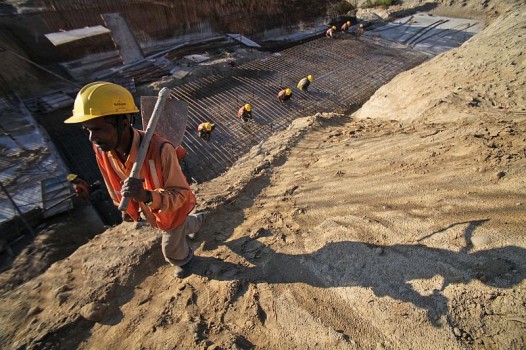 India's economy suffered its worst slump on record in April-June, with the gross domestic product (GDP) contracting by 23.9 per cent as the Coronavirus-related lockdowns weighed on the already-declining consumer demand and investment.

The GDP contraction in the world's fifth-largest economy compared with 3.1 per cent growth in the preceding January-March quarter and 5.2 per cent expansion in the same period a year back, according to official data released on Monday.

This is the sharpest contraction since quarterly figures started being published in 1996 and worse than what was expected by most analysts.

While the pandemic caused historic GDP contractions in economies around the world, the situation in India has been made worse by more than 78,000 new infections a day and total cases topping 35 lakh -- behind only the US and Brazil.

Russia's economy contracted by a lesser-than-expected 8.5 per cent in April-June but China grew by 3.2 per cent in the quarter.

China had recorded a contraction of 6.8 per cent in January-March when the coronavirus pandemic was at its peak in that country. Russia had grown by 1.6 per cent in the first quarter.

The US economy shrank at a dizzying 32.9 per cent annual rate in the April-June quarter -- by far the worst quarterly plunge ever -- when the viral outbreak shut down businesses, throwing tens of millions out of work and sending unemployment surging to 14.7 per cent.

Chief Economic Adviser K V Subramanian said that the first-quarter economic performance was "driven primarily due to an exogenous shock that has been felt globally."

The World Economic Outlook, he said, has highlighted countries across the globe where GDP per capita would decrease the most since 1870 -- once in one-and-a-half century event. "Which is what we are going through," he said.

During April-June, agriculture was the lone bright spot, growing by 3.4 per cent.

Subramanian said the economy is "experiencing a V-shaped recovery" after the lockdown eased.

But the Reserve Bank of India (RBI) in its annual report last week said the economy is likely to contract even in the second quarter (July-September).

Finance Minister Nirmala Sitharaman has already warned of a contraction for the full year because of the "act of God".

India's road to recovery appears a long and hard one, particularly after a mix of monetary and fiscal measures -- 115 basis points interest rate cuts and a Rs 20 lakh crore stimulus package -- has not so far been able to prop up the economy.

Economists expect growth to rebound only in the next year, mostly led by pent-up domestic demand and pick up in the manufacturing and services sectors after the easing of lockdown.

While the nationwide lockdown wiped away economic activity for almost half of the first quarter of 2020-21 fiscal, local lockdowns by several states thereafter and continuing restrictions on sectors such as hospitality, transport, and education have dented revival prospects.

Analysts say millions of workers lost their jobs and businesses suffered due to the lockdown, but the government has refuted any large-scale unemployment.

Even before the pandemic struck, the Indian economy was in the midst of a slowdown as a crisis in the shadow bank sector hurt new loans and took a toll on consumption, which accounts for some 60 per cent of the country's GDP.

"With a view to containing the spread of the Covid-19 pandemic, restrictions were imposed on the economic activities not deemed essential, as also on the movement of people from March 25, 2020.

"Though the restrictions have been gradually lifted, there has been an impact on the economic activities as well as on the data collection mechanisms," it added.

It also said the timelines for filing statutory returns were extended by most regulatory bodies.

"In these circumstances, the usual data sources were substituted by alternatives like GST, interactions with professional bodies, etc. and which were clearly limited," it said.

Adani Group Stocks In Focus; Jump Up To 7.6 Per Cent After GVK Deal