President George Bush's ringing rhetoric about freedom and liberty may have been Wilsonian in its reach but Cheneyesque it will remain in reality. 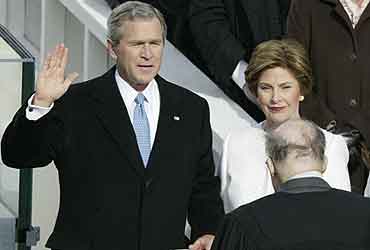 President George Bush’s ringing rhetoric about freedom and liberty may have been Wilsonian in its reach but Cheneyesque it will remain in reality.

The sweeping vision and the broad brush strokes of Bush’s inaugural address were reminiscent of great presidential addresses of the past but what happened in the days to follow was unique -- the speech was qualified, explained, footnoted and curtailed. Even Papa Bush came out to rein in the runaway words. Once the managers realized that the world still takes an American president’s words seriously, they were desperately rolling back in the freedom carpet. The bulging fervor of Bush’s evangelical talk wasn’t meant to change anything as people from Taipei to Teheran feared but to give a better context for his blunders.

President Bush didn’t really mean what he said. His call to arms for "freedom" wasn’t serious. At least not all of it. True, he uttered the word "freedom" 27 times in 23 minutes but it was a literary device. If those living under tyranny -- whom he so eloquently addressed -- are confused, it’s just too bad. They are silly if they thought for those precious 24 hours before the White House message police corrected the record that Bush was addressing them when he said: "Today, America speaks anew to the peoples of the world. All who live in tyranny and hopelessness can know: The United States  will not ignore your oppression, or excuse your oppressors. When you stand for your liberty, we will stand with you."

Stark and emotive as they are, the words don’t mean any "shift" in foreign policy, the message police informed the world. They were meant "as a crystallization and clarification of policies he is pursuing in Iraq, Afghanistan, the Middle East and elsewhere." Meaning, they are a retroactive justification, meant to provide a far broader reason for the Iraq war, not one anyone can really quarrel with. The WMD excuse didn’t work, but this one will. Who can quarrel with freedom? The freedom rationale can easily envelope past wars and future adventures.

And if the ambassadors of those undemocratic and autocratic countries were shaking in their winter boots for those 24 hours, they can chill with their scotch and soda. Again, Bush didn’t mean it. He is not about to push governments, pressure military leaders or extract any promises on behalf of freedom and liberty. He wasn’t really addressing them in these lines: "So it is the policy of the United States to seek and support the growth of democratic movements and institutions in every nation and culture, with the ultimate goal of ending tyranny in our world." Remember, he said it was the work of "generations" and all he is doing is starting the bidding.

If Bush said that he divided the world based on "oppression, which is always wrong, and freedom, which is eternally right," and warned that relations with the United States will "require decent treatment of their own people," he didn’t want to be taken literally. The ruling royalty, the mullahs, the generals and the presidents-for-life have nothing to fear. Ending tyranny may be "an urgent requirement," as Bush said, but the message police corrected the meaning of "urgent" the next day. It doesn’t mean what you think. It is an unknowable time in the future.

So what of the when, how and where of freedom? Will Bush do an Iraq on Iran, something his vice president cheerily hinted at on radio? Cheney unleashed himself on inaugural day on the Don Imus show, choosing the unpredictable radio shock jock over the safety net of Fox News. Imus asked Cheney about Iran, a country where ace journalist Seymour Hersh says Donald Rumsfeld has already let loose special agents to spot nuclear installations with good help from the Pakistanis for possible surgical strikes. .

Cheney, in perfect sync with Rumsfeld, said: "You look around at potential trouble spots, Iran is right at the top of the list." He then breezily raised the possibility that the Israelis "might well decide to act first, and let the rest of the world worry about cleaning up the mess afterwards." Iran also topped the list of "outposts of tyranny" given by Condoleezza Rice during her senate confirmation hearings two days before the inauguration. It was an expanded version of the "axis of evil" and included such perennials as Cuba, also rans like Myanmar and Zimbabwe (what’s tyranny without an African despot or two?) and new entrants like Belarus included apparently to alert Vladimir Putin not to go too far.

The multiple messages have created a mess and sent confused signals around the world. But this White House, breathtakingly bold when it comes to repackaging the president, his words, his policies, his history, his record, worked overtime to explain the complexities. With no hint of embarrassment, the minders said that Bush’s speech was "carefully written not to tie him to any inflexible or unrealistic application of his goal of ending tyranny."

Their cynicism has crossed new lines. Yes, it is bald. And yes, the speech outlining the great Bush Doctrine was a mere marketing exercise, a poll-tested song. It wasn’t a march for freedom, but a Karl Rove jog.