A series of terror attacks in Srinagar kill five and injure 35, and then two blasts in the heart of the historic Jama Masjid in Old Delhi leave 13 injured, and the whole country on red-alert. Updates 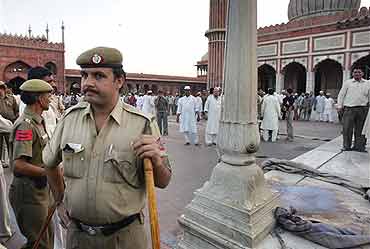 After the March 7 attack on Sankat Mochan Temple in Varanasi, the terrorists chose the historic historic Jama Masjid in Old Delhi as their next major religious target. It was around 5:20 when the first explosion took place inside the mosque, near gate number one, near a pond  used for ablutions. In the resulting chaos, while the injured were still being attended to, within fifteen minutes, followed the second blast

At least 13 people are reported injured, including a child, one of them seriously. Delhi Police personnel claim two crude bombs were used, made of Potassium chlorate and sulphur mixed with acid, with shrapnel added to cause damage. Both bombs were reportedly smuggled inside two small tin containers wrapped in plastic bags and kept near a pond where people wash themselves before and after prayers. No damage was done to the structure of the mosque.

Though the same mixture is used for manufacturing of detonators, the one used today was completely in its crude form and could only blacken the surface where it was planted. There were black patches near the pond. And blood stains. A thick blanket of black smoke engulfed the area as people ran for safety. Police Commissioner K K Paul, who visited the site, said that the explosions were of "low intensity" and an improvised device was used to trigger them.

"I was offering the namaz when a big sound rocked the whole Jama Masjid. When I turned around, I saw a thick cloud of smoke near the pond. I rushed to the spot and saw six people rushing towards us screaming, all with injuries on their bodies," Mohamad Adil, an eye witness was to recount later. An announcement was made on the public address system of the mosque, asking the devotees to leave the premises. "Even as we were preparing to send the injured to hospital, another explosion took place just near the first explosion," he said.

The terrorists had chosen their timing with care. Like at Varansai, when the blasts had been carried out on a Tuesday, the special day for Hanuman devotees, the day chosen for these blasts today was the busiest Friday, the first after Prophet Mohammad's birthday, and since it also happened to be a holiday on account of Ambedkar's birthday, a large number of people were present in the complex at the time of the explosion.

As the twin blasts set off utter chaos and a near-stampede situation in the historic Jama Masjid complex here today, what emerged unmistakably from the incidents were bewilderment and anger against the perpetrators of the attack. Angry devotees inside the mosque and others, who rushed to the spot from nearby areas shouted "Allah Ho Akbar" as they sought vengeance against perpetrators of the blasts.

Delhi Police Commissioner K K Paul and Shahi Imam of the Jama Masjid Syed Ahmed Bukhari both appealed to the devotees through the public address system to maintain calm, but many expressed their anger saying they could not accept such an attack on a religious place. "Government must find out the culprits who were behind the explosions very soon. It would help to maintain peace and harmony in the society," Wasim Khan, a local businessman, said. Anger set in after a brief spell of bewilderment after the explosions. "How can such a thing take place inside a place of worship"? was the common refrain among the people on the spot.

Syed Ahmed Bukhari, Shahi Imam of the mosque was soon on TV and appealed to all to maintain peace. "There were nearly 1,000 people inside Jama Masjid,"  he said, as he too spoke of the attack first on the Sankat Mochan temple in Varanasi, and  and now on the Jama Masjid. "We have to come together to fight the perpetrators of terrorism. This is the time to stay calm and let the police do their work," he said.

There was a near stampede situation after the twin blasts as people scrambled for safety. Ambulances and fire tenders were rushed to the communally sensitive and congested area to ensure law and order and the entire area was cordoned off. Police in large numbers were deployed to prevent any law and order problem. The injured were rushed to the LNJP hospital about four km away from the mosque.

Undeterred by the explosions, however, the devout were back in the mosque about one-and-half hours later to offer 'Isha' prayer.  Others to visit the mosque were home minister Shivraj Patil and Chief Minister of Delhi, Sheila Dikshit who has announced a compensation of Rs 50,000 for the seriously injured and Rs 25,000 for people with minor injuries. The Special Cell of the Delhi Police has been asked to investigate the incident. Delhi CM Sheila Dikshit .

Condemnations of the attacks have come from far and wide, from President A P J Abdul Kalam to Prime Minister Manmohan Singh to Congress President Sonia Gandhi to Leader of Opposition L K Advani and even from the VHP. VHP leader Praveen Togadia has immediately called for a halt of talks with Pakistan in view of these attacks and charged that just as M A Jinnah created Pakistan, the present authorities of that country were trying to divide India again. "Pakistan does not want Indian Muslims to come forward and participate in India's progress," he said. 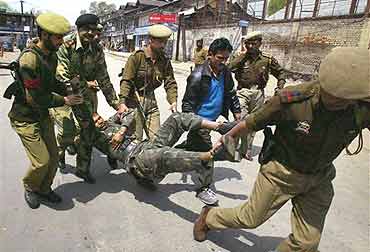 A nation-wide red-alert is on with security tightened at sensitive areas throughout the city. The attacks assume significance as earlier throughout the day, terrorists had launched a series of grenade attacks in busy areas of Srinagar, killing five civilians and injuring 35, including 10 security personnel. For details, please click here