Beyond Bush And Iraq

Repudiation of the Clinton legacy, which was, by transitivity, a repudiation of the Bush Sr. legacy, as well extreme exceptionalism and Manichaeism came together in President Bush's policy toward Iraq. Time to go back to traditional American internat 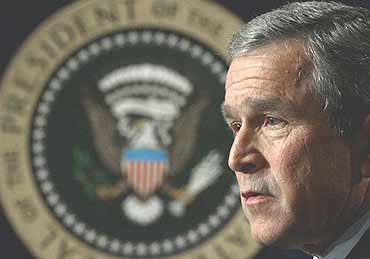 With the toll of the Iraq war mounting daily and the US Congress gridlocked over how to extricate its troops from the quagmire, the question that everyone asks, is what went wrong and how can the US recover from this disaster?

The answer to the first question can be summed up in one word: unilateralism. While the senior George Bush was an arch-multilateralist, his son has been an arch-unilateralist. Profoundly skeptical about the utility of international treaties, international institutions and international law, the current president annulled, unsigned or otherwise withdrew from a range of international agreements and mechanisms: the Kyoto Protocol on climate change, the International Criminal Court, the Anti-Ballistic Missile treaty.

Those examples of unilateralism and numerous others were gratuitous. There was no pressing need to shatter or suspend or block the work of decades. It was not as though the agreements in question prevented the administration from doing anything it needed to do at the time. Moreover, the administration offered no alternatives to what it was saying "no" to.

President Bush’s unilateralism was also apparent in the way he suspended active, high-level American diplomatic engagement in two chronically troubled areas, the Middle East and the Korean Peninsula. Then came September 11th – the goodwill generated worldwide evaporated quickly when it became apparent that the effect of September 11th on Bush himself was to reinforce his aversion to working through diplomacy, international institutions and alliances. To take just one example: The US gave the back of its hand to NATO when its governing body, the North Atlantic Council, offered, in effect, to make the war against the Taliban in Afghanistan a joint operation. "No thanks," the US said. "We’ll handle this one ourselves." The story of what happened next can be seen on TV screens daily.

In the second term, there has been some course-correction on foreign-policy issues other than Iraq.

The administration has made an effort to repair its relations with key allies, especially in Europe. It has reinstated diplomacy as an acceptable, indeed necessary, instrument of advancing some US interests, especially with regard to North Korea, where in the last few days we’ve seen a rare, welcome, laudable but fragile diplomatic success. In other respects, the administration has, in the president’s phrase, stayed the course – or at least tried to.

Three factors help explain why this has happened: First, Bush came into office determined to eradicate and indeed reverse the legacy of Bill Clinton. I remember, back in 2001, hearing from friends still in the executive branch that, in White House meetings, mention of "globalization" was declared taboo; it was "a Clinton word." Similarly, climate change and global warming were derided as "Gore talk." Grudges and score-settling do not make for sound policy. Nor do they make for grand strategy. Moreover, by setting out to undo and discredit everything his immediate predecessor had done, Bush was making a radical break with all his predecessors going back to the end of World War II: five Democrats and five Republicans – including his own father.

Second is the President’s particular brand of American exceptionalism. All US presidents since George Washington have, to one degree or another, believed in a form of nationalism that ascribes to the nation superior qualities, universal values, global interests, unique responsibilities and a special dispensation to use its unparalleled and unprecedented might on behalf of what its leaders deem to be right. But Bush adhered – and still adheres to an uncompromising and extreme variant of exceptionalism. It posits, explicitly, that the US is strong enough, both in hard power and soft power, to make one set of rules for itself and a different set for everyone else.

The third factor involves the division of the world into good and evil as a core principle for organizing the international system and conducting American foreign policy, and letting this geopolitical Manichaeism substitute for what I call a rule-based system. This has been a feature of Bush 43’s foreign policy from the beginning, but especially after 9/11.

The President proclaimed the "war on terror" in terms of an epic struggle against "evildoers," and he demanded that all countries choose sides: Either be with us or against us. If nations are with the US, they get leniency under international law and the pursuit of international norms; if they’re against, there is hell to pay. President Putin was "with us" in the war on terror, so he got a pass on his brutalization of Chechnya and his rollback of political reform in Russia.

On the other side of the Manichean equation: Iran is a certifiably "bad" country, so the US refused to negotiate with its leadership. Yet for 40 years the US conducted intensive, sustained diplomacy with the USSR, which President Ronald Reagan called "the evil empire."

These three factors – repudiation of the Clinton legacy, which was, by transitivity, a repudiation of the Bush 41 legacy, as well extreme exceptionalism and Manichaeism – came together in President Bush’s policy toward Iraq. By going after Saddam, he tried to prove himself tough where Clinton was soft. The ultra-exceptionalist in Bush set out to topple Saddam in defiance of the international community. The Manichean in him saw Saddam as the ultimate example of an evildoer – indeed, one he thought to be in league with Osama bin Laden. That was a willful misperception that led the President to conflate two different enemies and to see regime-change in Iraq as a natural and necessary sequel to regime-change in Afghanistan. As a result, Iraq has the potential of becoming the most serious, consequential foreign-policy blunder in the history of the republic.

Precisely because Iraq is a policy disaster, one consequence may well be a national abandonment of the attitudes that brought it about. Republican as well as Democratic candidates for the presidency are, with varying degrees of explicitness, promising a restoration of what amounts to traditional American internationalism — that is, a repudiation of Bush unilateralism.

The president to be inaugurated on January 20, 2009, needs as much help from the rest of the world as possible. Help must come from countries whose relations with the US are strained as well as from an enfeebled United Nations, a NATO that is mired in Afghanistan and a European Union that will be nursing grievances against the US while trying to patch its own internal disputes.

Yet that new administration will have some advantages. In addition to its honeymoon with Congress, it will also have a grace period with the world. Much of the ill will toward America that has been reflected in surveys of international public opinion is Bush-specific. Foreign critics will continue to find the US often overbearing and sometimes obnoxious. But many will be willing to give the next administration a chance to demonstrate a form of leadership that is easier to follow than Mr. Bush’s has been. And the next president – whoever he, or she, is – will see and seize that opportunity. Or so we must all hope.

Strobe Talbott is president of the Brookings Institution and a former deputy secretary of state. His next book, on global governance, will be published by Simon & Schuster in January 2008. Rights: © 2007 Yale Center for the Study of Globalization. YaleGlobal Online