With no Test side showing the skills or spirit to beat Australia, it's time to revisit Kerry Packer's concept of 'supertests' and a World XI 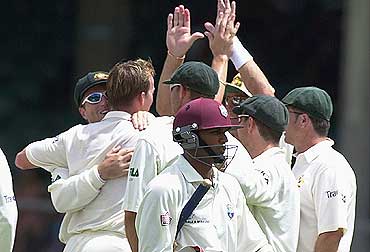 It’s the eve of the final day’s play of the third Test between Australia and West Indies. Presumptuous and premature as it might sound, but by the time the day is through, Steve Waugh should catch up with Clive Lloyd as the winningest captain in the history of Test cricket, with 36 wins apiece. Remarkably, Waugh has achieved this landmark in 26 fewer Tests than Lloyd (48 compared to 74, or a winning rate of 75 per cent). And, in all likelihood, at the expense of sounding presumptuous again, Waugh should be standing alone at the summit a Test later.

It’s fitting that Waugh should take over from Lloyd, for this Australian bunch is the first team since the fearsome Windies side of the late-seventies and early-eighties to stake a claim to being one of sport’s all-time greatest dynasties. Few will question their right to share a stage with the likes of Lloyd’s Windies in cricket, Red Auerbach’s Boston Celtics of the 1950s and 1960s and Michael Jordan’s Chicago Bulls in the nineties in basketball, the Australian Davis Cup team of the fifties, the current Ferrari outfit in Formula 1, to name a few.

Winning has a heady feel to it. As an athlete, once you have felt it, you don’t want to let go. More so when you have been deep down in the dumps, spat on and dismissed as good for nothing. Waugh should know the feeling, as he’s endured a period in Australian cricket during the late eighties when hope was its biggest ally. But what of some of the new players, the ones who have broken into the side, or played most of their cricket, during the golden period of the past four years?

Like Adam Gilchrist, who has won 33 of the 41 Test matches he had played in (till the second Test against the Windies, which has been taken as the cut-off date for all subsequent statistics in this piece), losing just five and drawing the other three. In other words, Gilchrist has ended up on the victorious side in four of every five Test matches. Or, to look at it another way, he has tasted defeat just once in every eight Tests.

Meanwhile, despite coming in with one top-order bat and a handful of tailenders for company, he has racked up 2,793 runs at an enviable Ttest average of 60.71 -- the fifth highest among all batters who have scored more than 2,000 runs and within striking distance of second-placed Graeme Pollock (60.97).

Or, take Matthew Hayden. In his first stint, he played seven Test matches, averaging just 21.75 and ending up on the losing side on four of those occasions. Since making a comeback to the side in 2000, Hayden has played 33 Tests, winning 25 and losing just three. During this time, he has amassed 2,994 runs at a prolific average of 58.7, bumping up his career average to a more than respectable 51.6.

Never having faced the humiliation or the humbling experience of constant drubbing at the game’s highest level, can these guys understand fully the agony of a loss? Perhaps, it’s some explanation of why, on the rare occasion that they have faced defeat, their behaviour starts to break down. They turn uncouth and ungracious, and leave behind a trail of broken glass panes in dressing rooms or verbal skirmishes on the field.

Watching them pound the Windies in their backyard, probably to another whitewash, contrasting thoughts come to mind.

On the one hand, the Australian brand of cricket enthrals and captivates. It’s sport as it should be played: fearlessly and to win. So, they don’t fret much about which way the coin falls on the opening day. The batters look to score briskly all along. Instead of batting the opposition out of the game, Waugh declares so as to bait the opposition into going for a win while giving his bowlers ample time to do the job.

On the other hand, it’s also getting monotonous to watch Australia manhandle all other teams. Where is the opposition? Where are the rivalries, the contests? When will we see a side subject the Australians to relentless pressure and send them on a leather hunt? Sport thrives on rivalries. Sadly, for cricket, the roots for today’s rivalries can be attributed more to political and social hangovers from the past than a vibrant cricketing present.

In the past four years, Australia has hardly been stretched. At home, they have beaten every side hollow. Away from home, they have stumbled just twice, to Sri Lanka and to India. And let’s face it, even in those series, they had one foot in the door, but they just couldn’t close it. South Africa was expected to run close, but even they were hammered 5-1, in back-to-back three-match series, home and away.

Today, probably, the only match-up involving Australia that promises a close fare is India, in the heat, grime and dustbowl tracks of the sub-continent. And that’s a good 18 months away. Till then, expect the Australia juggernaut to roll on. Unless the ICC (International Cricket Council), in a rare show of boldness and imagination, borrow a trick or two from Kerry Packer.

Around 25 years ago, in 1977, Australian media baron Kerry Packer, miffed at being refused television rights by his country’s board despite being the highest bidder, signed up 50 of the world’s best cricketers to play in a parallel tour. The World Series Cricket was a watershed moment for the game, as players and boards clashed. And in came night cricket, coloured clothes, white balls and big money.

Australian cricketers squared up against the West Indies and a World XI (which also included players from the Windies side) in one-day and five-day matches, with the latter being appropriately billed as ‘supertests’. This wasn’t the first time an Australian side was taking on a crack world team. In 1971-72, a similar match-up was cobbled together by the Australian Cricket Board after a tour by South Africa fell through because of issues relating to apartheid. But let it also not be the last.

Cricket has evolved much since those turbulent times. There are no political or financial compulsions to look outside the conventional cricket calendar. South Africa is back in the international fold, Packer’s interests in Australian cricket are secure with Channel Nine, the players are paid handsomely and don’t have any reason to steer in another direction, and cricket boards and marketers have never had it this good.

Still, if cricket was ever crying for a match-up cutting across geographical boundaries, it is now. Australia versus a World XI. Let the ICC revive the concept of ‘supertests’, just for this one time. There’s a compelling match-up staring us in the face, waiting to be given shape and released in beautiful cricket grounds across the world. Do it in the name of sport and cricket, for the sheer love of the game.

On one side, there’s one of the best cricket sides of all time, whose supremacy is unchallenged. On the other, there are some extraordinary cricketers, who have had individual success against this Australian side in varying measures, but have never quite known team success. Bring them together.

Who wouldn’t want to see 22 of the world’s best cricketers of their era face-off, not in some meaningless exhibition match, but in a competitive test series? Imagine Lara and Tendulkar at the wicket together, squaring off against McGrath and Warne. Or Bond, with his fiery pace, and Akram, with his bag of tricks, bowling in tandem to Hayden and Langer. Does it get better than that?

Here’s something for the ICC to chew upon: two series, of three matches each, one played in Australia (suggested venues: Perth, Melbourne and Sydney, to bring in a sense of history and varying pitches) and the other elsewhere (Mumbai, Lord’s and Johannesburg). And, since I’m dispensing uncalled-for advice to cricket administrators on how to rev up the game, let me also turn selector and present my squad of fourteen players to pit their skills and wits -- and vocabulary -- against the Aussies.

It’s been an unenviable task, such is the sweep of talent on offer. And like all team selections, there are bound to be preferences and differences in opinion. For the record, the broad considerations that have gone into picking this squad are team balance (for instance, Harbhajan and Murali can’t play together), faithfulness to their current roles and positions (the two exceptions are Lara being pushed to number five and Kallis, who gives the extra bowling option, batting at six), record against the Aussies and current form.

Some purists might scoff at the suggestion of such 'supertests', dismissing it as a populist move that tampers with the game’s traditions. Then again, change can be bad, or it can be progress and therefore good. Unlike most other team sports, top-flight cricket still revolves around the concept of nations  -- and it should stay that way. There are some sacred spaces where money should never be allowed to rule. Still, for the good of the game, there’s a case for making exceptions and bending the rules.

History has shown that cricket has gained whenever it has responded imaginatively to cricketing ideas. One-day cricket, day-night matches, coloured clothing were all ideas that were greeted with scepticism. They haven’t done too badly.

Conceived with imagination and handled with care by administrators, a match-up like this can arouse great passion among the players, stoke interest among fans and throw uncomfortable -- but immensely challenging -- questions at the Australians. The key is to infuse a competitive spirit in the match-up, so that the tests shape up as professional contests, not exhibition games. It’s a flight of fancy, which has as much chance of taking off as Bangladesh winning a Test series.

Even if it all came together, the million-dollar question would be: would a World XI beat Australia? It’s a close call. Player for player, the World XI is streets ahead in the batting department, but if Warne plays, it’s fairly neck-and-neck in bowling. But just superior talent can’t ensure victory in a team sport. You can’t just bring together a disparate group of exceptionally talented cricketers, whose single commonality is they have been at the receiving end of an Aussie demolition job, and expect them to rally as a unit. Indeed, that could prove to be the undoing for a World XI.

To delve into history is an interesting academic exercise, but isn’t of much value to gain insights into how this futuristic match-up might shape up. Of the six 'supertests' played between Australia and a World XI between 1977-79, the latter won five. It must be emphasised that the World XI then comprised of the cream of West Indies, who were the best side in the game then, and top players from other countries. The dynamics of the 2003 version of this match-up are very different. The Australians are the invincibles and the other countries are playing catch up.

It’s a tough call to make. The only way to find out -- and surely, scores of fans out there would love to find out -- is to make it a reality. Mr Malcolm Speed and Mr Jagmohan Dalmiya, are you listening?

'From Stoic Losers To Chest-Thumping Warriors'