Between Hysteria And Denial

No dearth of apologists for those who inflict mass murder on the innocent, but who speaks for the security forces who fight for and so often die to defend us - or the necessary powers, equipment and facilities required by them? 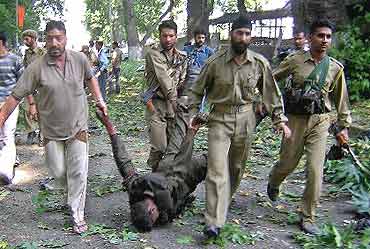 Another bitter reminder of the relentless and expanding Pakistan-backed terrorist enterprise to cause harm to India at every opportunity and in every way possible has been delivered at Bangalore, with the attack at the prestigious Indian Institute of Science, in which Professor MC Puri was killed, and four others injured.

As always, in the wake of a sensational terrorist attack, there is great media focus bordering on hysteria, and pro forma statements by a range of political leaders regarding the 'dastardly' nature of the attack, and the nation's 'determination' not to yield before terrorism. Soon enough, however, the incident will be forgotten - as, indeed, the October 29 serial bombings at Delhi virtually have already been - and there will be no significant change in the basic structure of national responses to terrorism.

Indeed, if such incidents were to occur with greater frequency, instead of provoking a focused and coherent response, they would probably result in progressive anaesthetisation and indifference, with reports of attacks gradually slipping off the front pages, into inconsequential narratives buried deep within, unless a particularly great atrocity - with double-digit fatalities - meets the demands of sensationalism.

This, indeed, is what has happened in all long-term theatres of persistent terrorism in the country, whether these are in Jammu & Kashmir, the Northeast, or the 'Naxalite belt', or, as was earlier the case, in Punjab.

The political discourse on the subject also reflects a range of utterly fruitless peculiarities. For one thing, whenever a particular political party or formation comes to power, it has become the norm - with rare personal exception - that its various constituents and members try desperately to underplay the magnitude and significance of terrorism. On the other hand, the same parties and formations, when they are out of power, seek constantly to raise the issue and make many a brave statement about fighting terrorism.

The truth is that many of those who occupied the most significant posts and ministries during their tenure in power, and failed to do anything significant on this challenge, are today making loud noises about the state's failure to evolve realistic and adequate responses.

Unfortunately, the political classes in India seek to make political capital out of everything, often and increasingly to the detriment of the national interest. I have said this again and again, a consensus across party lines is necessary on the issue of terrorism and on counter-terrorism policy. This is a problem that has been, and will remain, with us for many years, and alternately burying our heads in the sand, or responding with hysteria, can only undermine public confidence in the state machinery.

It is significant that Western democracies have, virtually on the first sign of terrorism on their own soil, immediately secured a consensus on response, establishing necessary and elaborate legislative instrumentalities and empowering their enforcement machinery to the hilt. On the other hand, after decades of terrorism on Indian soil, we continue to muddy issues and engage in the game of mutual recrimination and populist posturing.

Terrorist organisations across the world are linking up and establishing an immensely coordinated and globalised network - but we fail even to secure a minimal agreement on, or coordination of, national responses. The upshot is that, wherever terrorism rears its malignant head, more and more troops from the country's various security forces are simply thrown into the conflagration, willing sacrifices to the state's failure to evolve effective and proactive mechanisms for the containment and neutralisation of this spreading affliction.

But the 'security forces' are not the faceless, formless, mechanical 'force' that the media, the politicians and the general public think them to be, to be pitched into the void at will - it is human beings who make up these forces, and there will be limits to their willingness for sacrifice if they find that the very people, powers and institutions that they fight for, and so often die to defend, are careless of their needs and their concerns.

And such carelessness is manifest everywhere, as the political classes remain concerned exclusively with their own survival, security and profit, rather than with the well-being of the nation's fighting men, or of the nation itself. It would be difficult, today, to find an example of a political leader who has raised issues relating to the interests of security personnel, or even concerning the necessary powers, equipment and facilities required by these forces to secure effectiveness against an enemy that is constantly availing of the very latest techniques, technologies and processes of modernity.

On the other hand, you will find numberless leaders and public figures who are willing to speak the language of the terrorists and their apologists, who constantly exhort us to understand 'root causes' and the motives of 'our children' and 'our brothers and sisters' who inflict mass murder on innocents.

Today, so many of those who bravely fought terrorism have been abandoned to the mongrel formations of the terrorists and their 'human rights' fronts, and to the vagaries of a flawed and deeply prejudiced judicial system; and the weight of national institutions appears disproportionately to be exerted to benefit those who are intent on the destruction of these very institutions, rather than those who seek to protect them.

The incident at Bangalore demonstrates the urgent need to clearly evaluate who we seek to protect, and who we are exposing to unacceptable risk. Today, it is the terrorists and their proxies who are best protected by our legal and institutional safeguards, and by our political orientation; innocents, national assets - both institutional and individual - and the men who fight to defend the state, are often left to their own devices in the face of a merciless and unremitting onslaught.

For years now, the national leadership has been deluding itself, and misleading the nation, into believing that terrorism is something that can lend itself to an easy solution across the negotiating table - with Pakistan, with terrorist front organisations, and with terrorist groups themselves.

The truth, however, is that this is a long war of attrition, and there should be no doubt whatsoever of the malevolent vision or of the determination of India's enemies to keep this war alive. This is a protracted war, one that will require an effective state apparatus to create powerful instrumentalities to hunt down and destroy the terrorists, and to impose unbearable costs on their supporters and sponsors.

Unfortunately, we seem to be moving in exactly the opposite direction, as appeasement of the enemy dominates our political vision, as security agencies are constantly asked to operate with their hands tied behind their backs, and as the enveloping environment is made more and more conducive to exploitation and operation by terrorists.

India can continue to ignore and underplay the threat of terrorism only at its own peril. The last National Democratic Alliance government squandered its entire term talking of a 'proactive policy' against terrorism, but failed even to define the framework of such a policy. There is, as yet, little evidence of the present United Progressive Alliance regime rising above the unending tide of scandals and partisan squabbles to find the necessary time to evolve a comprehensive and effective counter-terrorism strategy.

The terrorists and their sponsors in Pakistan and Bangladesh, by contrast, have a clear and overarching strategy, and continue to systematically implement it within a framework of years and decades. Unless we realise this, and act forcefully in accordance, to defend India's democracy, its institutions and its people, brief episodes of hysteria will continue to mark public and official responses in the wake of each new incident, in a continuously widening theatre of violence across the country.

K.P.S.Gill is Publisher, SAIR; President, Institute for Conflict Management. This article was first published in the Pioneer.