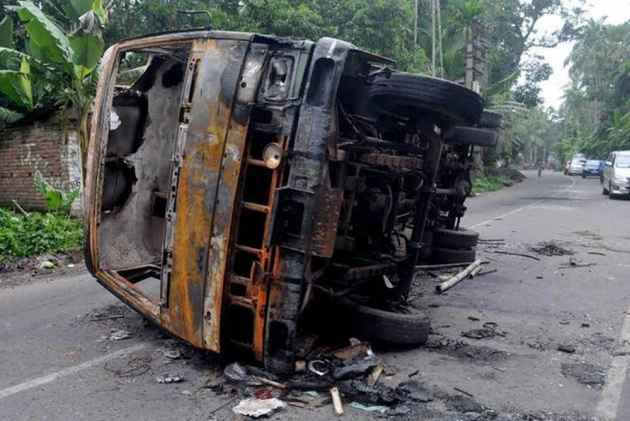 Amid uneasy calm that prevails in West Bengal's Basirhat, North 24 Paraganas district, following communal clashes this week, Muslims have come forward to raise money to help Hindu neighbours rebuild their gutted shops and businesses. As many as 100 shops and homes were vandalised in Basirhat.
The communal clashes broke out on Tuesday over an objectionable Facebook post by a 17-year-old boy. A violent mob put up road blockades at several places and attacked members of the other community, besides destroying many shops.
“Even after the demolition of the Babri mosque, our town remained peaceful. What happened since Tuesday was not right. Some outsiders and some of our local boys are to blame. But now we are pooling money for our Hindu neighbours. We want them to forget the losses and start afresh,” Gaji, a local businessman, told The Indian Express.
Ajay Pal, a shopkeeper, said he lost goods worth more than Rs 15,000 when hundreds of people came and ransacked his shop.
“They took away everything. I do not know why. My neighbours and Muslim friends are now offering me money to restart my business. I will take a decision soon,” he told the newspaper.
Basirhat and Baduria have been calm since Thursday. According to the daily, a couple of peace meetings have been held in Basirhat, at which leaders of both communities and police were present.

Another shop-owner, Ruma De, too, has been offered Rs 2,000 for a start. Similar initiatives have been taken by Muslim residents of Masjidpara, Bhyabla, Chapapara and other areas of Basirhat.
“It is not a hollow promise. We have told local shop-owners that we will give as much as it takes, Rs 2 lakh or Rs 5 lakh. We will help you, whether by pooling money or by collecting subscriptions to cover your losses,” said Ershad Ali Gazi of Masjidpara.
In Kolkata, chief minister Mamata Banerjee blamed the BJP for the violence. She also announced a judicial inquiry into the communal clashes.
On Saturday, the BJP met West Bengal governor KN Tripathi and demanded that the Centre should immediately impose President's rule as the law and order situation in the state has "completely broken down".