Behind The Scenes At Arnab's Studio

Hey you! You anti-national, what are you doing walking onto my set before me and carrying a flag. 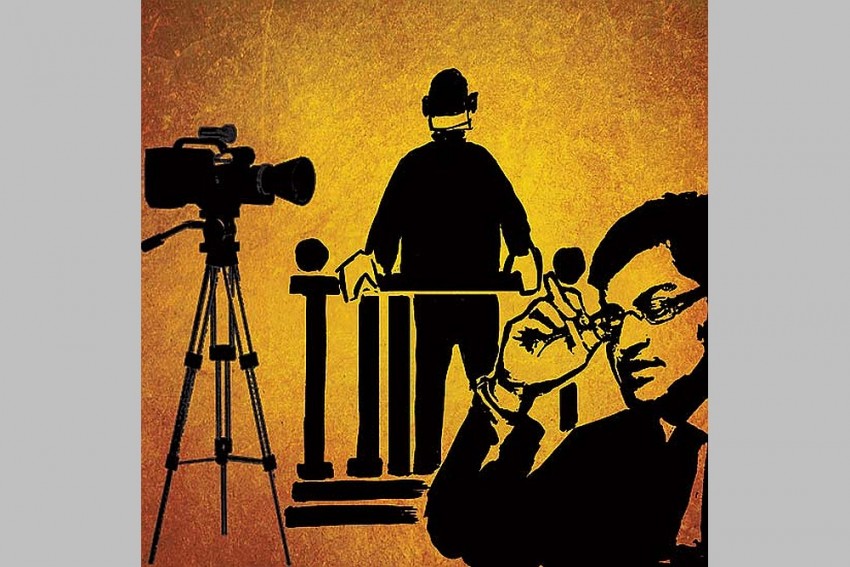 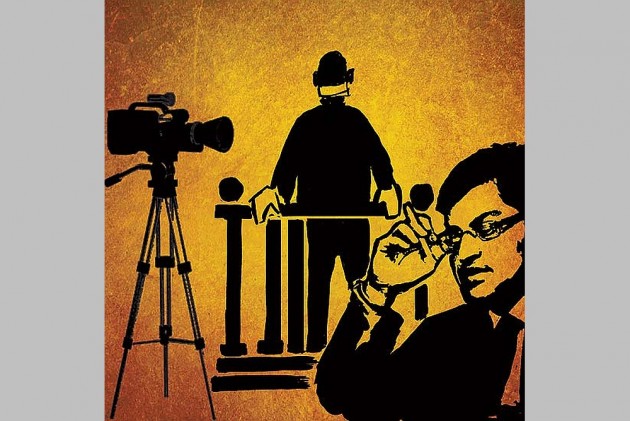 The TV channel Times Now is attracting quite a few eyeballs and raising an equal number of eyebrows over its coverage of the row over nationalism. More precisely, the role of its anchor, Arnab Goswami. To figure out what's going on, here's a behind the scenes look at what happens in the studio.

Arnab: Hey you! You anti-national, what are you doing walking onto my set before me and carrying a flag. Is that a Pakistani flag? How dare you? You should be flogged in a public place...

Flag Carrier: Sorry Sir, I'm just the set assistant. I was told you might need the Indian flag to wrap around yourself on tonight's show on patriotism. I'll take it back...

Arnab: How dare you! I may need to raise it along with the decibel level and TRPs even though I can do enough flag-waving without a flag. Who is that other fellow carrying a placard? He must be an anti-national from JNU. How dare he? He should be hung, drawn and quartered...

Flag Carrier: He's the other set assistant. The placard is a screen to conceal the flames that lick the screen when you are on. The producer felt it might look like the Make in India event where the fire had reached the stage where people were still performing.

Arnab: I have shut you off; I will now allow you to speak…Voices such as yours should not be heard. …What is that sound in my ear? Oh, it's the producer, but Mr Producer, how do you know he's just an assistant? These anti-nationals have mastered the art of disguise. See how many anti-nationals are showing up in my studio disguised as professors and academics…What's that? I invited them? Well, then, their credentials should be checked at the gate, their ID cards, their bank accounts, sources of foreign money , etc.

Producer: Arnab, It's me, the show is not going to start for another two hours. Plus, we invite guests, we send cars to pick them up, we pay them for their appearances, how can we check their ID's? It's not been done in news television before.

Producer: Arnab, I am the one who Okays the ads for Times Now. I know what it says but let's not get carried away...

Arnab: What about when they were carrying away poor Hanumanthapa's body in Siachen. I was the one who reminded everyone that a soldier had died and we were hosting anti-nationals on our soil, and in our studios. Did you see the spike in tweets about the show?

Producer: They were not necessarily in our favour. I think that the Siachen issue is buried now. We have had our own reporters attacked by lawyers in the courts.

Arnab: How dare they? Who are these anti-nationals who have the guts to beat up our reporters? I shall expose them, the nation wants to know, who are they?

Producer: They are the same ones we have been calling patriots and nationalists. They were singing Vande Matram on your show.

Arnab: How dare they? Don't they know who they are taking on? We are the voice of the people. Bring them on to the show and I will teach them a lesson in patriotism.

Producer: I tried but they have switched off their mobiles.

'We Love This Country'