B'desh Blown Away By Gayle

The opener's unbeaten 104 powered the Windies to a 10-wicket win and a Super Eight slot after the bowlers had restricted the opposition to 161. 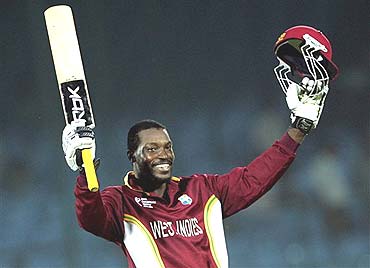 Chris Gayle slammed a blistering century as title holders West Indies advanced to the Super Eight stage of the Champions Trophy in style by crushing a hapless Bangladesh by 10 wickets in a qualifying round clash at Jaipur tonight.

Left-handed opener Gayle hit an unbeaten 104 to see the defending champions cruise past the meagre Bangladesh target of 162 with more than 13 overs to spare in the day-night encounter at the Sawai Man Singh stadium.

It was Gayle's 13th one-day hundred and was studded with 11 fours and three sixes.

The Jamaican, playing in his 145th match, made a composed start before launching into the minnows' bowling. After reaching the fifty-mark, Gayle waded into the opposition attack, lifting two sixes off Mohammad Rafique in successive overs, and then one more of Aftab Ahmed which disappeared out of the ground.

Shivnarine Chanderpaul played the supporting cast with 52 not out in the unbroken opening stand that rounded a perfect day at office for the defending champions.

The result saw Bangladesh go out of the reckoning while also confirming Sri Lanka's entry into the second stage of the competition.

The Lankans, like the West Indies, had two wins from as many matches but an upset win by Bangladesh today could have made a three-way tie a possibility.

The Sri Lanka-West Indies match on Saturday in Mumbai will decide the order of the teams after the qualifying stage. The top team will be slotted with Pakistan, South Africa and New Zealand while the side that finishes second will be bunched with India, Australia and England in the Super Eight.

Earlier, Dwayne Bravo picked up three for 14 to slice through the Bangladesh middle order after Aftab Ahmed and Shahriar Nafees had given them a confident start.

Ahmed cracked a scintillating half-century, only to see his knock go in vain with Bangladesh suffering a typical batting collapse on a featherbed of a track.

The right handed batsman, who turns 21 in a month's time, played a fearless knock of 59 from 55 balls. The youngster creamed the West Indian pacers, Jerome Taylor in particular, to collect seven fours and two sixes.

But Bangladesh, needing a win to survive in the tournament, slipped from 95 for one and were dismissed for 161 with more than three overs to spare.

Opening batsman Nafees was the only other batsman to make a significant contribution with 38 and shared a 85-run stand with Aftab for the second wicket.

Besides Bravo, Corey Collymore and Marlon Samuels grabbed two wickets each to script the West Indian revival after Taylor, who also took two wickets, and Ian Bradshaw failed to put the brakes on Bangladesh.

Electing to bat, Bangladesh showed positive intent with Nafees driving Taylor to point boundary the first ball of the match.

The experiment to send Mohammad Ashraful failed once again with the right hander falling leg before to Taylor in the fifth over.

But Nafees and Aftab took advantage of the perfect batting conditions, showing a good sense of shot selection. The Chittagong-born Aftab was the dominant partner. He punished Taylor, who tried to bounce him out, with a few cavalier shots on the on-side.

To be fair to the Jamaican fast bowler, Aftab succumbed to the leg-side trap when his hook shot went straight to Samuels at fine leg, but the fielder made a complete mess of it and the ball slipped through his hands to the boundary.

The batsman was on 15 then and had just crashed Taylor to the mid-wicket fence twice in that over.

A hook off a searing bouncer landed over the ropes behind, but the shot of his innings came against Bradshaw whom he flicked to backward square-leg for a stunning six.

The partnership was broken when Nafees holed out to Chris Gayle of Samuels in the 20th over.

Collymore then had Saqibul Hasan and skipper Habibul Bashar, both without opening their account, off successive balls in the next over. The captain had been dismissed for a two-ball nought in the first match against Sri Lanka.

Aftab's own innings came to an end three overs later when he found Chanderpaul at long leg while trying to hit Samuels through the line. The rest of the innings crumbled like a pack of cards with Khaled Mashud being the only batsman offering a semblance of resistance to remain unbeaten on 22.

Bangladesh, who had to win the match to keep themselves in the tournament, retained the squad that lost to Sri Lanka in the tournament opener at Mohali on Saturday. West Indies made one change from the team that beat Zimbabwe in their first match at Ahmedabad on Sunday, with pacer Collymore replacing Dwayne Smith who was yet to fully recover from a viral fever.

Ramnaresh Sarwan, who had also contracted the virus, was declared fit and included in the team.

Runako Morton, another player suffering from the infection, had also recovered and was named the 12th man.

But the Windies had a worry with pace spearhead Fidel Edwards picking up the virus.