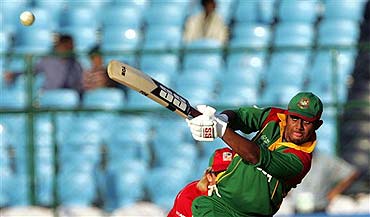 Twenty-year-old Nafees hit an unbeaten 123 to help Bangladesh post a competitive 231 for six before their bowlers skittled out Zimbabwe for 130 to give the team a pride-salvaging win in the day-night encounter.

Both the teams had gone out of reckoning even before the match, but the result helped Bangladesh prove a point or two.

Habibul Bashar's men went into the match on the back of a humiliating 10-wicket loss to the West Indies and they had also gone down 2-3 to the Zimbabweans in a recent one-day series.

In the end, it turned out to be a comprehensive win with Zimbabwe failing to put up a semblance of a fight while chasing and being bowled out with more than five overs to spare.

Wicketkeeper-opener Brendan Taylor's 52 proved to be the lone bright spot in an otherwise gloomy evening for Zimbabwe. Saqibul Hasan starred for Bangladesh with the ball, claiming three for 18 while Mohammad Rafique and Abdur Razzak picked two wickets each.

But the evening belonged to Nafees who authored Bangladesh's batting revival after their miserable collapse against the Windies on Wednesday.

The left-handed opener, who is said to have the right temperament for taking on the leadership baton, cracked 17 fours and a six for his second one-day hundred.

The Dhaka-born player, who hit the headlines with a maiden Test century against Australia at Fatullah earlier this year, made the most of a half-chance on zero when he was reprieved by Elton Chigumbura in the fourth over of the innings.

Electing to bat, Bangladesh suffered an early setback, with Rajin Saleh and Aftab Ahmed falling with only 26 runs on the board.

Saleh, brought in place of the out of form Mohammad Ashraful, failed to justify his inclusion as he fell leg before to Ed Rainsford for six.

But the big blow for the Tigers was the loss of Aftab who had been in brilliant form the other day against Brian Lara's men.

The diminutive youngster succumbed to a stunning catch by wicketkeeper Taylor who took the ball single-handed diving to his left.

But Nafees batted without restraint, feeding on the confidence given by Saqibul at the other end. The opening batsman struck two fours in an Ireland over before Aftab fell, and three more in the 12th and 13th over of the innings by Ireland and Rainsford respectively.

He then turned his attention to Gary Brent, whom he drove to the fence on both sides of the wicket off successive overs.

The dismissal of Saqibul, caught by Rainsford off 19-year old leg-spinner Tafadzwa Kamungozi, slowed down the run flow.

Obviously, the team did not want to suffer another batting collapse, and captain Bashar did well the job of preventing a collapse after a strong start like on Wednesday.

Nafees reached his century with a run down to third man off Rainsford from 143 balls.

Bashar then fell to Rainsford while trying to break the self-imposed shackles before Farhad Reza and Masharafe Mortaza departed in quick succession.

Earlier, Bangladesh made two changes to the team that lost to the West Indies in the previous match, Mohammad Ashraful and Syed Rasel made way for Rajin Saleh and Mehrab Hossain Jr., the last player making his ODI debut.

Zimbabwe had Gary Brent coming in place of Terry Duffin, who has flown back home after being unwell for the last week. He played neither of the two matches.