In the late 1990s, when Lara was having the worst run of his career, the cricket world did not react as strongly as it did now when Tendulkar was not among runs. What accounts for this crisis and recovery of Tendulkar Inc.? 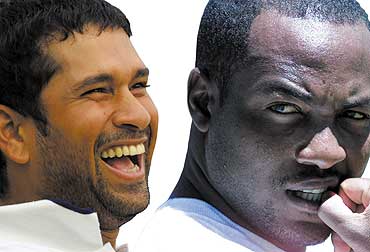 Even as Sachin Tendulkar was about to enter 1999, his tenth year in international cricket, he received the ultimate recognition for any batsman — a testimonial from Sir Donald Bradman that among all batsmen he has watched after his retirement, Tendulkar’s batting resembled his the most. To understand the Don’s statement, one needs to know what his batting was all about. And, perhaps, the best person to turn to for a fully developed analysis of Bradman’s batting is the West Indian political activist and cricket writer C.L.R. James.

In his book Beyond A Boundary, James describes the batsmen of the 1930s and 1940s, including Bradman, as having taken batting into the discourse of industrial production from the discourse of art of the Edwardian age (1890-1914). According to James, batsmen of the 1930s and 40s, including Sir Walter Hammond and Bradman, reverted to a technique that was orthodox, they minimised shots that were risky, and emphasised on producing runs reliably and predictably in a reasonably quick timeframe. According to James, the school of batting was connected dialectically to the economic and political trends in the society—the discourse of maximisation of runs and minimisation of time spent in the crease was connected to Fordism (industrial mass production) and the discourse of cutting out risky shots, or security over flair, was connected to the concept of the Welfare State, which was being formulated in inter-war Britain and Europe, as a consequence of industrialization and war.

Former England captain, Michael Atherton, one of the best modern exponents of technical perfection, in his autobiography, Opening Up, talks about Tendulkar and Lara as the best batsmen he has played against. Atherton, a Cambridge blue in history, discusses the batting styles of the two great modern masters. Lara, according to Atherton, is the only player of his generation to possess a touch of genius. The only person to run Lara close, according to Atherton, is not Tendulkar but the Indian master’s former captain Mohammed Azharuddin. According to Atherton, Lara, and to a lesser extent, Azharuddin, make batting look so easy and beautiful when executing their shots in the most unorthodox yet elegant ways. Tendulkar, on the other hand, is extremely orthodox in his shot selection, yet remarkably quick in scoring his runs, and very predictable in the production of runs as well. According to Atherton, Lara, even at the height of his brilliance, gives the bowler and the fielding captain a ray of hope. On the other hand, Tendulkar is the person who clinically mauls the confidence of the bowler and the fielding team and makes everybody, including the opposition, believe that his wicket is for the taking only after a customary hundred or even more. Atherton’s analysis of Lara and Tendulkar are, in fact, remarkably similar to those about the twosome by Shane Warne and Allan Donald.

If one were to contextualise Tendulkar’s recent run of poor form in Tests in the light of these observations and critiques, and his return to form in the Sydney Test, one would easily come to terms with the reactions that these have caused in the world of cricket. Whereas Indian fans were dismayed, startled, puzzled and worried at what was happening to their star batsmen in Test matches when he was in the worst form of his career till date, cricketers and fans in other countries were no less surprised though they did not share the worry and despair. One of the most memorable moments of recent times was when former West Indies fast bowler and television commentator Michael Holding interviewed Sri Lanka’s spin wizard Muthiah Muralitharan on collecting his man of the series trophy in the recent Sri Lanka-England Test series. After talking about Murali’s bowling, Holding decided to quip about his recent improved batting, and he said, "You seem to be batting well. This year, in Test matches, you have a higher average than Sachin Tendulkar." Murali, whose mind could not even fathom the reality, just thought that Holding was playing a fast one, to which Holding said, "Well, this is a fact. This is statistics." Murali’s surprised stare said it all!

One must remember that in the late 1990s, when Lara was having the worst run of his career, a period that extended for quite some time, the cricket world did not react as strongly as it did now when Tendulkar was not among runs. An artist or a musician, after all, can have barren periods (even though music and literature are situated within the field of capitalism through the recording and publishing industries) and they get out of the rut by using the same resources that helped them in their creative days. Nations and people, in the age of global capitalism, panic only when multinational companies go bankrupt, when national economies get into acute recession, when production dries up!

Then again, when that happens, they soon dig themselves out of the hole by adopting extremely clinical methods of survival, whether it is a takeover or an underwriting of debts by the banks or even a cash injection by the State. Caution becomes the watchword and skeletal processes and procedures are set up again but deliberately slowed down till production gets back to normal levels again. The return to mass production by Tendulkar Incorporated in Sydney was no less different—the batting star eschewed from executing his normal reportoire of shots in his unbeaten 241 in the first innings and even played the second fiddle in the second to Rahul Dravid! The much-needed injection in terms of security and confidence to kick-start production came from V.V.S. Laxman who was playing a sublime innings at the other end. It is another matter though whether Tendulkar would have enjoyed not playing the expansive drive through cover, his natural reaction and one which he enjoys doing, when yet another of those flurry of well-pitched up deliveries just outside the off-stump came his way. Now that mass production has resumed one can expect the processes and procedures to be normalised again. Beware, Pakistan.

Meanwhile, in another corner of the Southern Hemisphere, unmindful of how a great run-maker was turning the corner, a sublime artist continued to stand among ruins and create sheer magic. As Wisden Cricket Asia so rightly wrote about Lara while listing six of his most memorable Test innings this summer, ‘He has failed more often than most greats, but oscillating between godliness and impoverishment, he has sculpted some of the most alluring masterpieces of modern times.’ If Tendulkar evokes a sense of fear in me with his staggering conformism to the discourse of capitalism—consistency, predictability, enforcement of gaps between the professional (something to be ‘done’ irrespective of whether you ‘enjoy’ it or not) and the personal, between thinking and feeling et al—Lara is a source of regeneration in that he has humanized the concept of success in post-industrialized society—one gets the feeling that Lara thinks, feels, works and enjoys all at the same time and uses this equivocal language to make inroads into a system, which is structurally inhuman.

(The author does research on sport at University of Warwick, UK)