The farmers, who have been camping at the Ramlila ground here since Thursday, began their march to Parliament Street around 10.30 am amid heavy policy deployment. 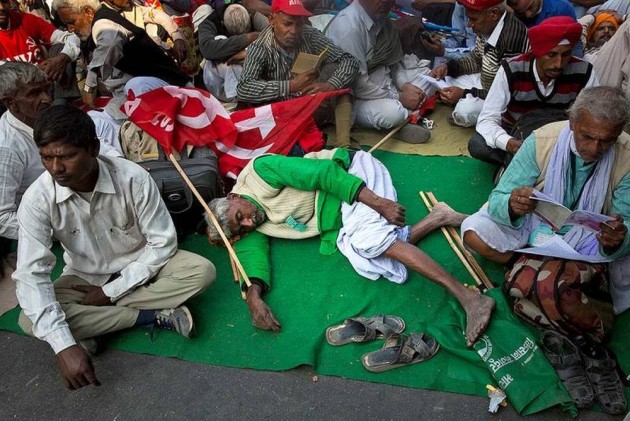 The leaders of all opposition parties stand united with farmers in ensuring their good future, Congress president Rahul Gandhi said on Friday while addressing a gathering of protesting farmers in Delhi, and called for a farm loan waiver.

Gandhi, while addressing farmers at Jantar Mantar, he said no one will be able to silence the voice of farmers and youth. If the Indian government insults them, then they will ensure its removal, he added.

Farmers from different parts of the country, including Andhra Pradesh, Gujarat, Madhya Pradesh, Maharashtra, Tamil Nadu, West Bengal and Uttar Pradesh converged at the Ramlila ground on Thursday and  and on Friday started marching towards Parliament, demanding loan waiver, implementation of Swaminathan Commission report and fair remuneration for their produce, among other things.

The farmers are also demanding a joint session of the parliament to specifically address the agrarian crisis in the country besides demanding passage of two private members Bills-The Farmers Freedom from Indebtedness Bill 2018 and Farmers’ Right to Guaranteed Remunerative Minimum Support Price for Agricultural Commodities Bill 2018 in the upcoming winter session.

Addressing the gathering at Jantar Mantar,  Gandhi asserted that farmers were not seeking a "free gift" from the government by asking for a farm loan waiver, but merely asking for what's due to them.

"If this government can waive Rs 3.5 lakh crore loans of 15 big industrialists, why can't the loans of crores of farmers in the country be waived?" he asked.

Later Delhi Chief Minister Arvind Kejriwal also joined opposition leaders on the venue and claimed that the Centre had filed an affidavit in the Supreme Court saying it would not implement the M S Swaminathan Commission report.

"The government had made a number of promises to farmers in the last election (2014), but it has not fulfilled those promises. By not implementing the Swaminathan Commission report, Modi ji has stabbed the farmers in the back ('kisano ke peeth mey chhura bhonka hai')," he alleged.

He said the Union government should implement the report in five months.

"The affidavit filed in the court should be withdrawn and the report should be implemented, otherwise, farmers would wreak havoc in 2019 elections ('kisan agle election mey qayamat dhah denge')," he said.

Reddy, the national secretary of the CPI, alleged that the BJP dispensation led by Prime Minister Narendra Modi is most the "anti-farmer government".

"Modi government tried to pass the Land Acquisition (Amendment) Bill. But, as the opposition parties opposed it, the bill was not passed in the Rajya Sabha. If the BJP wins again then it will take steps to pass the controversial bill," Reddy said.

He alleged that the BJP government at the Centre has no wish to implement the Swaminathan Commission's recommendation All farmers bodies across the country have been demanding implementation of the panel's report.

Yechury said, "This is the same police station (Parliament Street police station) where Bhagat Singh was taken into custody for throwing a bomb (in the Legislative Assembly)."

"We have the power of votes, if the government does not change its stand, it will be overthrown," he said, adding, from Kashmir to Kanyakumari the country is united and "we will remove Modi (in next elections)".

Anjaan added that continuous neglect of farmers will "ensure Modi's and the BJP's downfall in 2019".

Swaraj India leader Yogendra Yadav said the protest -- Kisan Mukti March 2018 -- to Delhi is a historic development as not only farmers across the nation have been assembled under one platform but also it has enjoyed supports from all section of society.

TMC leader Dinesh Trivedi said, "Farmers of India stands before us. This is India's movement. Mamataji (Banerjee) has sent you love. If you have a strong resolve you can achieve everything. There are talks about loan waiver but should the farmer even have to take loans."

He also said this gathering was the "real parliament" and called for a special session of Parliament.

NCP chief Sharad Pawar said the condition of farmers in the country needs to be changed but the government is "not sympathetic" towards their plight.

Social activists and political leaders also slammed the Union government, alleging it has not implemented a "single major initiative" for farmers in the past four and a half years and that demonetisation worsened the agrarian distress in the country.

Addressing a rally of nearly 35,000 farmers, gathered from across the country in the national capital, Narmada Bachao Andolan activist Medha Patkar alleged the government from the "very beginning has been adopting pro-corporate policies and not a single major initiative for farmers has been launched by it".

"The target of the BJP government is to handover farmers', adivasis' land to industrialists, corporate," Patkar claimed.

"Demonetisation's impact falls on farmers across the country," he said, adding that the exercise to suddenly render a bulk of Indian currency in circulation hit farmers, who deal largely in cash, hard and contributed to the agrarian distress.

Samajwadi Party leader Dharmendra Yadav said his party has always worked to strengthen the farmers' movement for better price for their produce.

"We have always been there to support your protests earlier and will continue to do so," he said, adding that farmers should not be undermined and they have the power to "topple the government".

Atul Anjaan, national secretary of All India Kisan Sabha, alleged that the "apathetic attitude" of the Narendra Modi government towards farmers has led to the distress in the agriculture sector and the situation is worsening.

The farmers, who have been camping at the Ramlila ground here since Thursday, began their march to Parliament Street around 10.30 am amid heavy policy deployment.

They were stopped near Parliament Street police station, after which they assembled there.

Over 3,500 police personnel have been deployed on the route of the march. According to a senior police officer, special arrangements have been made in Central and New Delhi police districts.

Banded under the All India Kisan Sangharsh Coordination Committee, which claims to be an umbrella body of 207 organisations of farmers and agricultural workers, many farmers arrived in the city on trains, buses and other modes of transport.