He appreciated her massive public outreach saying that he is of the belief that she can get the State out of the difficulties with her sincerity, dedication and zeal. 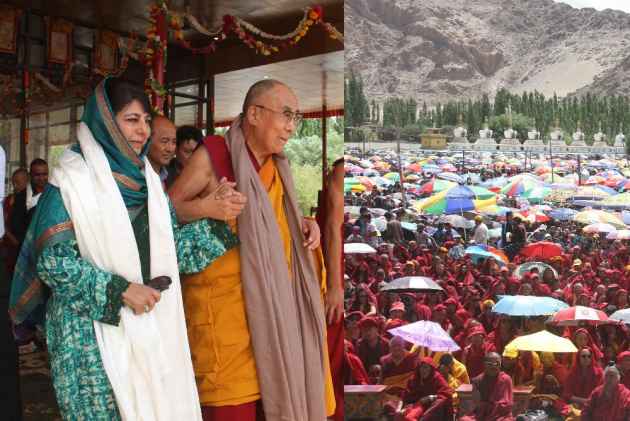 He said Dalai Lama is currently on a visit to Leh in connection with an annual Buddhist function.

The spokesman said Dalai Lama in his address expressed gratitude to the Chief Minister for her visit. “He appreciated her massive public outreach saying that he is of the belief that she can get the State out of the difficulties with her sincerity, dedication and zeal”, the spokesman said.

In her public address at Leh, the Chief Minister highlighted the pluralistic ethos of Jammu and Kashmir and described it as the abode of different faiths and cultures. The Tibetan spiritual leader also addressed the gathering.

“People living in amity and brotherhood is specialty of the state and underlined the need for strengthening the bonds among various sections of the society”, Mehbooba said.

Mehbooba Mufti praised Dalai Lama for his recent statement in which he had criticized the elements, who were out to label Muslims as terrorists. “The Dalai Lama had asked people to follow the path of harmony and amity with each other. The statement from such a towering personality was need of the hour and it reflects the unparallel spiritual stature of the Dalai Lama”, she said.

The Chief Minister wished Dalai Lama a long life and good health. She hoped that he would continue to visit the State in future and bless its people.   The Chief Minister said it is the intention of her Government to attract more and more tourists to Ladakh and market it appropriately in the tourism market.  She said she has proposed to have annual Kailash Mansarovar  Yatra through Leh which would increase the tourist footfall in the region by a great measure. She appreciated the people of Leh for maintaining a hygienic environment despite heavy tourist rush.

Later, the Chief Minister had a one-to-one interaction with the Dalai Lama.