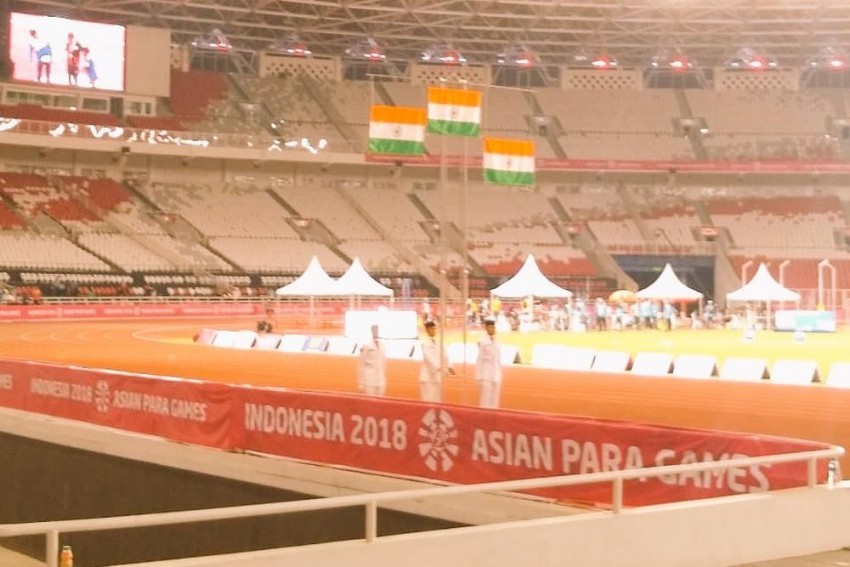 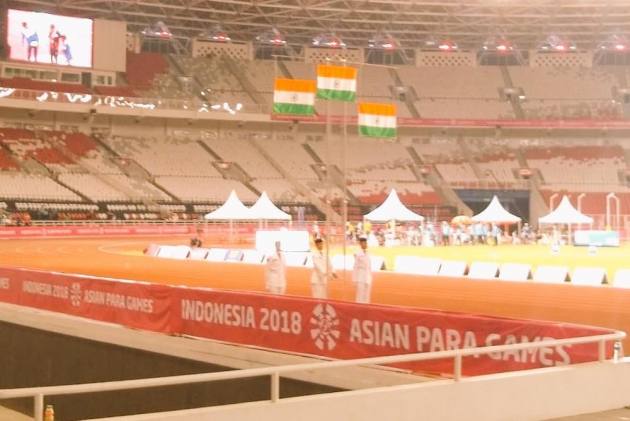 In a rare feat for Indian athletics, Sharad Kumar led 1-2-3 finish in men's high jump T42/63 category, in the Asian Para Games at Jakarta on Thursday.

The silver was claimed by Rio Paralympic bronze-medallist Varun Bhati (1.82m) and the bronze went to the Rio gold-medallist Thangavelu Mariyappan (1.67m). Bhati's jump was his season's best effort.

The 26-year-old world championships silver-medallist bettered the Asian as well as the Games record with a jump of 1.90m to claim the top honours.

Sharad, who hails from Bihar, suffered paralysis in his left leg at the age of two after being administered a spurious polio medicine at the local eradication drive. He has been a former world number one.

In the same event, Rinku picked up a bronze medal to make it an India-dominated podium. The F46 category of disability covers upper limb deficiency, impaired muscle power or impaired range of movement.

In the javelin throw, Gurjar notched up his silver with an effort of 61.33m in his fifth attempt. Gurjar trained for 22 days in Finland before the Games, an exercise that was backed by the Sports Authority of India (SAI).

Rinku recorded a personal best of 60.92m for the bronze, while the gold went to Sri Lanka's Dinesh Herath who smashed the Games as well as the Asian record with a throw of 61.84m.

However, it was a disappointment for Jhajharia, a silver-winner in the in the last Asian Para Games in Incheon.

The veteran 37-year-old, a Khel Ratna awardee and the greatest Paralympian from India, produced his season's best throw of 59.17m but finished well outside the medal bracket.

In the men's 400m race, Avnil Kumar clocked 52sec to fetch a bronze. The gold in this event was won by Iran's Omid Zarifsanayei, who took 51.41sec to complete the race, while Thailand's Songwut Lamsan.

Kumar lost the silver to Lamsan by a fraction of a second.

Medals tumbled in for India in other track-and-field events as well with Anandan Gunasekram claiming the men's 400m silver in the T44, 62/64 classification, while Vinay Kumar settled for a bronze.

Both the classifications deal with the upper limb deficiencies and leg length difference.

India remained on the ninth place in the overall tally with eight gold, 17 silver and 25 bronze medals. The country added 13 podiums to its tally Thursday for a total of 50 medals.

In Pics: Selfie With Virat! Cricket Fan Invades Pitch To Get Up Close With Skipper