In a frenetic last over, India needed six runs to defend the title. Mahmudullah bowled to Kuldeep Yadav, who took a single off the first ball. Kedar Jadhav took another single, then a double followed. A dot, then a single to level the score. Then a leg-bye sealed Bangladesh's fate. 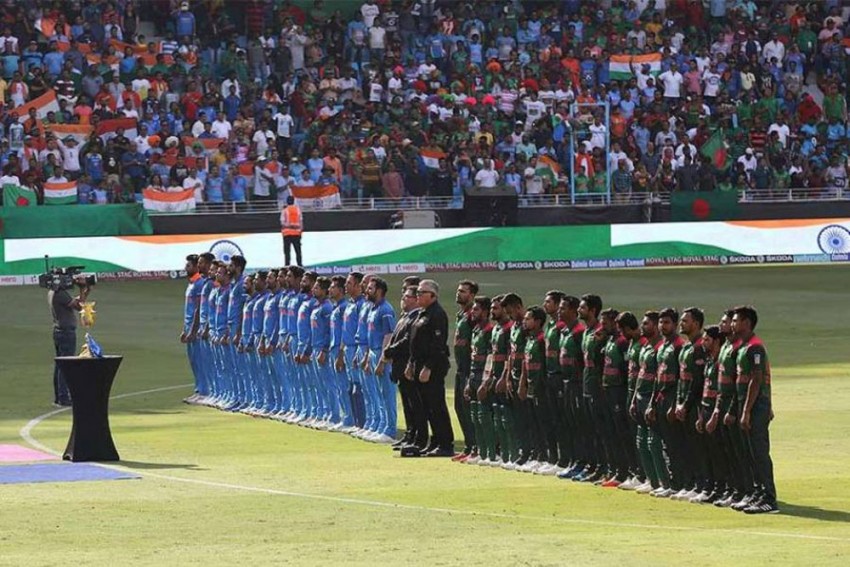 Bangladesh suffered yet another agonising defeat at the hands of India to settle for the runner-ups' tag for the third time in the last four editions of the tournament. They lost to Pakistan in 2012 final by two runs, they to India in 2016 final by eight runs.

In a frenetic last over, India needed six runs to defend the title. Mahmudullah bowled to Kuldeep Yadav, who took a single off the first ball. Kedar Jadhav took another single, then a double followed. A dot, then a single to level the score. Then a leg-bye sealed Bangladesh's fate.

Jadhav, who had earlier limped off the field due to yet another hammy issue, took a single, no a leg bye to give India their seventh continental title.

For the vanquished, it was token watches to console. But it's only the materialistic part. Known their fighting spirit and giving it all, Bangladesh cricketers have won hearts.

Opener Liton Das slammed his maiden one-day international century in Bangladesh's modest 222 but it was the bowlers who made India sweat in their nervy chase of the 50-over contest.

A 45-run sixth wicket stand between Ravindra Jadeja and Bhuvneshwar Kumar and a gritty 23-run unbeaten knock by Kedar Jadhav, who was limping due to a hamstring injury, finally gave India a three-wicket win.

India, led by Rohit Sharma, could not rest until a leg-bye off the final ball of the innings completed their chase for their seventh Asia Cup title.

"Despite the batting implosion after their brightest start of the tournament, it was a bowling effort that Bangladesh can be proud of as they seemed out of the game on numerous occasions but clawed their way back each time," the country's biggest-selling English newspaper wrote.

Another English-language daily New Age headlined its report "Brave Bangladesh fall just short", with an accompanying picture of Mahmudullah lying on the pitch after he failed to accomplish a run out of Kumar.

The newspaper hailed Bangladesh's batting hero and man-of-the-match Das as "next big thing in Bangladesh" in a separate article, saying that with each stroke en route to his 121 off 117 balls, the 23-year-old batsman "showed his class".

Das set up the foundation for a competitive score but a mid-innings collapse saw Bangladesh slip from 120-0 to 151-5 before being dismissed in 48.3.

Meanwhile, India, who went into the tournament without regular skipper Virat Kohli, relished their title win that comes after a 1-4 Test loss in England.
But former Indian cricketers praised Bangladesh for their fighting instincts that made the Asia Cup final an entertaining affair.

"Hats off to Bangladesh for their splendid fight and attitude, for not giving up and playing out of their skins... despite missing Shakib (Al Hasan) and Tamim (Iqbal). Special mention to Kedar Jadhav for his grit and commitment."

"Congratulations India on winning the Asia Cup. The bowlers were phenomenal throughout the tournament and the main reason that we managed to win. Really special effort from Bangladesh to take the game so deep. Well done," Kaif said on Twitter.

Bangladesh will face Zimbabwe for three one-day internationals and two Tests at home in October and November.