After fielding a second-string side in their final Super Four match against Afghanistan to rest key players, India will unleash their full might to defend the title. 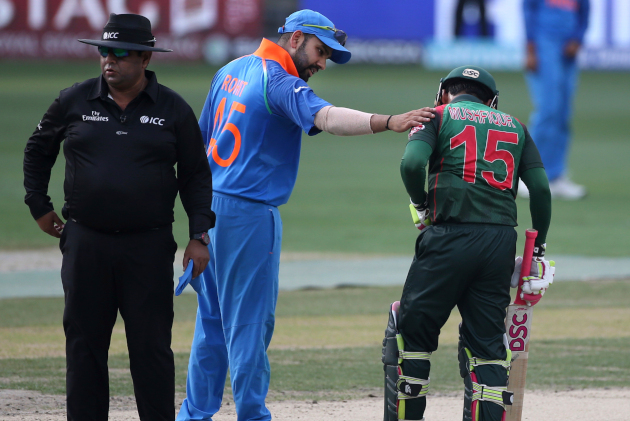 In a repeat of last edition's final, India will face Bangladesh in the title clash of 2018 Asia Cup at Dubai on Friday.

India beat Bangladesh in the Dhaka final two years ago by eight wickets to win the first continental title in the T20I format thus lifting the trophy for the sixth time.

Asia Cup 2018: It's India Vs Bangladesh In The Final

Bangladesh deserve to be in the final, but an India-Bangladesh match-up is not a top-billing. It certainly doesn't live up to an India-Pakistan rivalry, irrespective of how last few matches have produced one-sided results. Bangladeshi camp sure knows this fact, and they have a point to prove. But one should thank Bangladesh for sparing the fans from another India-Pakistan encounter.

But once again, India will start as the clear favourites considering a myriad of reasons. For one, India are the big boys even though Bangladesh have done exceptionally well to close the gap in the last few years. Making it to the final for the third successive time is a testament to that fact. But it seems like they have already been robbed off the chance to present a fair fight.

After fielding a second-string side in their final Super Four match against Afghanistan to rest key players, India will unleash their full might to defend the title.

Skipper Rohit Sharma, his opening partner Shikhar Dhawan, pacers Bhuvneshwar Kumar and Jasprit Bumrah, and spinner Yuzvendra Chahal are sure to return for the final. Also, the unfavourable result against the Afghans must have given Rohit Sharma & Co just the right motivation to perform at the highest level.

In contrast, Bangladesh are wounded, in every sense. They have lost opener Tamim Iqbal on the opening day itself, and now mercurial all-rounder Shakib Al Hasan has also returned home. And that's not all.

Mushfiqur Rahim, who played a match-winning innings against Pakistan in the virtual semi-final, is also struggling with a cramp. Besides, they were also soundly beaten by India in the Super Four. But they can fight like 'wounded Tigers' and earn their first major trophy.

Like Bangladesh, India too have their share of injury issues. Hardik Pandya, a match-winner in his own right, picked up a freak injury during the Pakistan group match. Peripheral players Axar Patel and Shardul Thakur also joined the casualty list.

But India have found a silver lining amidst the injury woes. The arrival of Ravindra Jadeja has boosted the team. He was instrumental in India's Super Four win over Pakistan.

India will once again look for a good start from openers. The captain and his deputy have shielded India's rather fragile looking middle order. And it's possibly the only area Bangladesh can hope to exploit in the final. If the likes of Mustafizur Rahman and Mehidy Hasan Miraz can make early inroads as they did against Pakistan in the last Super Four match, then it's game on.

With Mahendra Singh Dhoni going through a lean-patch, India can't afford to expose their middle-order. Ambati Rayudu and Dinesh Karthik have scored runs, but India's middle-order still revolves around their former skipper. So, the match will be effectively decided by how India's openers perform.

For Bangladesh, if Rahim plays and carries his good run, then they can hope to counter Indian attack. The diminutive batsman has established himself as one of the most tenacious batsmen. He can change the course of a match with his gritty, but not so pronounced batting. Except him, there is no other batsman who can give a good fight to Indian attack comprising some the smartest bowlers – Bhuvneshwar, Bumrah, Jadeja, Kuldeep Yadav, Chahal, etc.

Bangladesh also take pride in their impressive line-up of bowlers, featuring Rahman and Mehidy. Against Pakistan, the two got support from the likes of Mahmudullah and Rubel Hossain. Then there is their tireless workhorse in captain Masrafe Mortaza.

Bangladesh have won five times, including famous victories in 2007 ICC World Cup match and 2012 Asia Cup. One match was a no result, in 2014. Bangladesh's last win over India came in 2015, and since then, India have won the last three meeting.

Despite the many disadvantages, Bangladesh can still shock India. They sure are one of the most dangerous sides in white-ball cricket and are known for their fighting spirit. Now, the question for them is, how much can they give!

For India, second in ODI rankings, it should be a routine outing. All they need against the seventh-ranked team is sensible performances from their star players. But again, its easier said than done.

When and where to watch the match live:

It will be played at Dubai International Cricket Stadium, Dubai.