Ashes Of KR Narayanan Was Given A Second Christian Burial, Admits Daughter 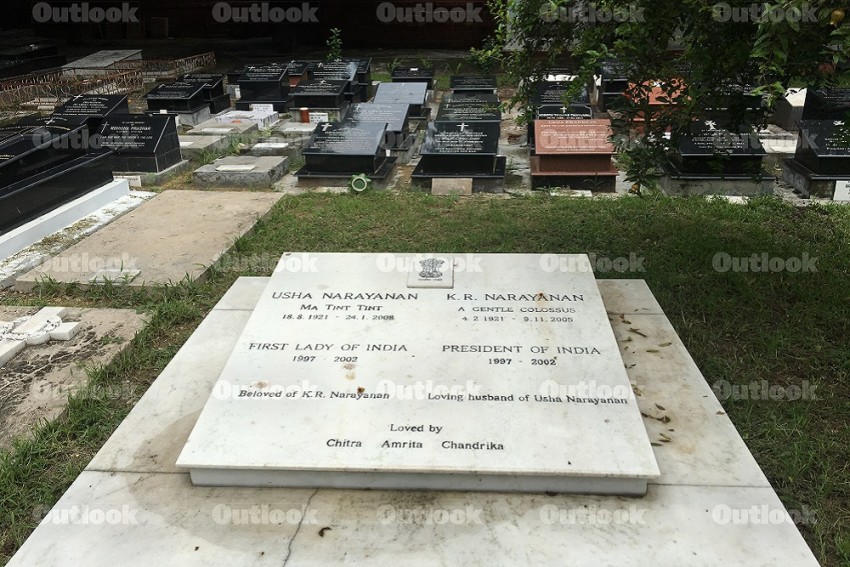 THE TWIN-TOMB OF FORMER PRESIDENT K.R.NARAYANAN AND WIFE USHA IN A CEMETERY ON PRITHVIRAJ ROAD IN DELHI
Jitender Gupta/Outlook
Outlook Web Bureau 2017-07-27T16:30:27+05:30 Ashes Of KR Narayanan Was Given A Second Christian Burial, Admits Daughter 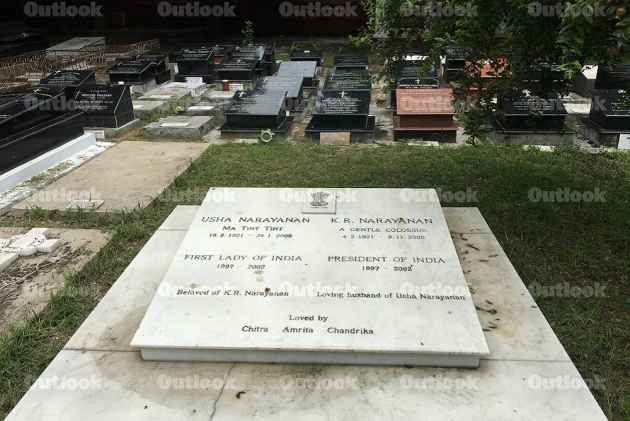 A part of the ashes of India’s first Dalit President KR Narayanan, who was cremated on the banks Yamuna following Hindu rituals, was given a second Christian burial, admits his daughter Chitra Narayanan.

There was kerfuffle over the discovery of a tomb in cemetery exclusively for Christians in the name of former president KR Narayanan, who was born into a Hindu Dalit family in Uzhavoor village in Kerala and remained so officially until he died on 9 November 2005.

The tomb was alongside his wife Usha Narayanan in the non-denominational cemetery run by the Delhi Cemeteries Committee on Prithviraj Road.

Chitra, the eldest of Narayanan’s two daughters and former IFS officer, in an email told Outlook: “The burial was done according to the wishes of her mother (Usha), a Christian.”

Narayanan, during his stint in Rangoon as an Indian Foreign Service Official, had met his wife, a Burmese woman named Tint Tint, an Evangelist protestant, and married her in 1950 after the Centre gave its blessing. Tint Tint later adopted the name Usha.

“After the passing of Shri KR Narayanan, the State Funeral and cremation according to Hindu rites took place in Karma Bhumi near Rajghat,” said Chitra, and IFS officer.

“A small portion of the ashes were retained by his widow Smt Usha Narayanan, a Christian, to be buried alongside her. At her passing in 2008, this was done according to her wishes at the Prithviraj Road cemetery. This was an entirely private wish and should be respected accordingly.”

Chitra said a part of the urns containing the ashes were  taken by train to Haridwar.

“It was immersed in the Ganga by the eldest daughter (Chitra)… The second part of the urns were accompanied by the younger daughter (Amrita) and taken to Kerala where the State Government arranged the procession to the Bharthapuzha, a sacred river of Kerala.”

Rev. J. Rebello of the Catholic church, who is also the chairman of Delhi Cemeteries Committee, had earlier told Outlook that the cemetery is exclusively for Christians.

"The burial happened because the Christian pastor of Narayanan’s wife, a protestant, could have vouched that Narayanan is a Christian," he said.

Narayanan had not officially willed that he be buried after his death.

"The church has no problem in burying the ashes, the Pope too has allowed it. But the person has to be a Christian,” said the Rev. Rebello.
"Even cremation of Christians is allowed,"he added.