And What Is Your Problem, Mr Kapil Sibal?

`Your house, your problem,'. the minister of state for science & technology had said. How about a strategy of spreading mass-awareness of traditional knowledge of seismic-proof house construction? 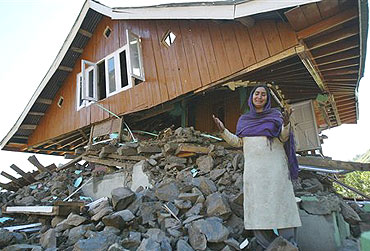 outlookindia.com
-0001-11-30T00:00:00+0553
Responding to the preparedness in the event of a major quake hitting Delhi, the minister of state for science & technology Mr Kapil Sibal had shocked everyone by his remarks in an interview to Outlook 'your house, your problem'. Shockingly, the honorable minister had only echoed the callousness with which earthquakes have been responded to in this country.

From Uttarkashi to Latur and from Bhuj to Kashmir, but for the location, the story has virtually been the same. Did anyone expect the minister to provide any words of wisdom when his ministry's track record in responding to past earthquakes in the country has been woefully inadequate and irresponsive? Each earthquake comes with a grim reminder: learn to live with the inevitability of the earth shaking beneath you. If only scientists could respond to and learn from it as had our ancestors. 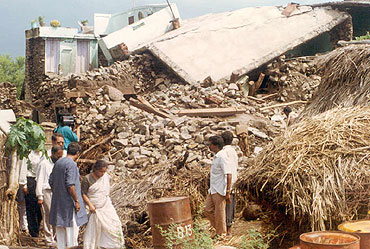 The previous major earthquake that had rocked Kashmir was 120 years ago. The Srinagar earthquake in 1885 had seen the palace and other royal buildings crumble like a pack of cards. Amazingly, the man-made structures that survived the devastation were the unique Dhajji-Diwari buildings. The 1905 Kangra quake was no less devastating either, raging practically everything to the ground but for the Kat-Ki Kunni houses. The age-old Pherols too had survived the Uttarkashi quake of 1991.

Built by masons, who had no formal degrees in structural engineering and architectural design, these structures stand today as the epitome of human creative instincts. Yet, these buildings continue to fascinate modern-day engineers who have spent years unfolding the unique features of these earthquake resistant houses of the past. Tragically, however, rarely does this learning translate into constructions based on such masterly designs.

Combination of wood and unreinforced masonry laid on weak mortar gave Dhajji-Diwari buildings the required flexibility. The wooden bands tied the mud mortar walls and imparted ductility to an otherwise brittle structure. The multi-storeyed Kat-Ki Kunni buildings were based on similar principles. Meaning timber-cornered buildings, the Kat-Ki Kunni houses have wood bonding at vertical intervals, both inside and outside the mud masonry, for flexibility and earthquake resistance. 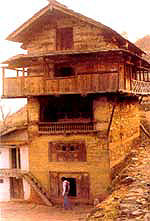 Traditional wisdom helped the entire village of Nandgaon in the Yamunotri valley survive the Uttarkashi quake. With all the Pherols in the village intact, not a single death was reported from this village during the massive quake that rocked the mighty Himalayas in 1991. Raithal, the adjoining village, had paid a heavy price for embracing modern construction.

It wasn't complicated engineering that helped Nandgaon survive in its carefully preserved multi-storeyed Pherols. Wooden tie-bands as beams and timber columns as pins hold the coursed-rubble masonry intact with required flexibility. Use of long stones with flat surfaces distributed the load vertically along the wall, minimising the tendency of the wall stones to push or run outward in the event of a tremor. These multi-stroreyed structures can put the best of structural engineers to shame for their present-day vulnerable construction.

Tragically, however, Dhajji-Diwari, Kat-Ki Kuni and Pherols are all part of history that only interests those who value peoples' knowledge as it has traversed and survived down the ages. Had that not been so, traditional earthquake resistant construction would have become essential reading for engineering graduates as well as a dominant component of all disaster rehabilitation programmes. 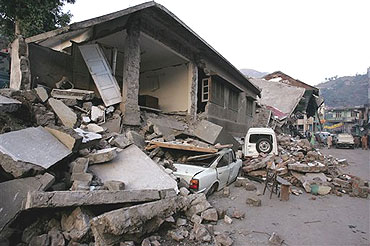 With the latest earthquake having occurred after a span of a century, the communities were taken off-guard. The end result was devastation of unprecedented nature. Instead of educating and making the communities aware about the need for earthquake resistant house construction, the minister has chosen to shrug off the responsibility as if this was the last of the quakes to have hit the country.

It has been a known fact that the villagers had waited long for getting guidelines on seismic-proof construction in Gujarat villages following the last earthquake. When no guidelines were received for over two months after the quake, they had reverted to building dwellings in a way best understood by them. Needless to say, the situation will get repeated in Kashmir too. With winters fast approaching, communities will have no other option but to go their way. And why not? After all, the honorable minister says `your house, your problem'.

It is indeed tragic that a country where earthquakes occur with increasing frequency and where information on traditional knowledge of seismic-proof house construction is reasonably well documented, village communities have to take ad hoc decisions about their well-being and survival. Clearly, a strategy of mass-awareness as well as a rehabilitation policy for earthquake-prone regions is woefully lacking. The message for Mr Kapil Sibal and his ministry is loud and clear.

Formerly with the World Bank, Dr Sudhirendar Sharma is a development analyst attached to the Delhi-based The Ecological Foundation.

The Left And The Right Of It