Until we in Delhi can provide a proper venue in which to hear and appreciate great orchestral music, all subtlety, all nuance, all the marvellous and persuasive point of classical music, Indian and Western, will escape us. 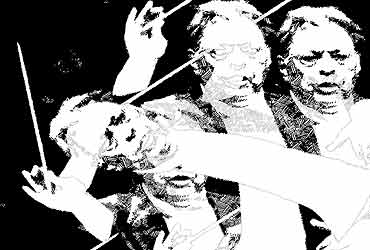 It was probably the force of gravity rather than the Force of Destiny that caused Zubin Mehta’s baton to leap out of his hand and fly into the viola section: we were in the early moments of Verdi’s Overture The Force of Destiny. A few seconds later another baton appe-ared, as if by magic, in his hand. But there wasn’t much magic in the music-making. Mehta was conducting the Bavarian State Orchestra in the second of two concerts they gave in India the week after Christmas.
The orchestra played a popular programme of Beethoven, Schubert and Verdi to a distinguished, and—in the cavern of the Indira Gandhi Indoor Stadium—rather isolated group of VIPs. Some distance away, the audience of unwashed watched from the bleachers.

We heard each piece several times: first, pumped out by huge but inadequate speakers, and again, a second or so later, when the soundwaves echoed from the back of the stadium.

Differences between loud and soft, and the high quality of the instrumental playing—both so important in classical music—were impossible to appreciate.

The force of gravity was much in evidence again in Schubert’s Unfinished Symphony. Schubert’s vision of man’s struggle with fate is always utterly personal and consoling, but it vanished in Mehta’s slow, ponderous reading. Even the famous opening of Beethoven’s Fifth Symphony, stark and ominous, was swathed in a winter smog like the city we had struggled across to attend the concert.

The orchestra were unable to keep a steady pulse until Mehta’s genius finally asserted itself towards the end of the movement; there was, suddenly, like the Delhi sun breaking through the dust, music in the air. But the lilting theme of the second movement was disturbingly loud, and the long transition from the third movement to the fourth had none of the mystery Beethoven intended.

Then, again, with blazes of glorious brass and filigree piccolo, Beethoven and the orchestra won the battle with the gnomes: Mehta led all to a rousing close.

Now the orchestra had found the measure of the stadium. The encore, a polka by Strauss, was the highlight of the evening. But until we in Delhi can provide a proper venue in which to hear and appreciate great orchestral music, and until the amplification Mafia are finally confined to rock concerts and political rallies, all subtlety, all nuance, all the marvellous and persuasive point of classical music, Indian and Western, will escape us.

We must insist that live means live, not piped.

'Rigging Hype And All Else'