'All Good Things Must End' 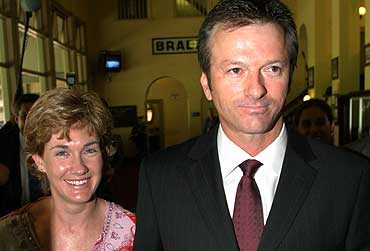 Australian Test captain Steve Waugh, one of the greatest batsmen in cricketing history who also won millions of Indian hearts for his charity work, today announced his retirement from international competition at the end of the upcoming series in India.

The 38-year-old Waugh, a living legend who turned the Australians into an invincible team in world cricket, will bring his illustrious 19-year-old career to an end after the fourth Test in early January.

"My present form and fitness suggests I could play on but all good things must come to an end and I believe Sydney is the perfect place," Waugh told a press conference at the Sydney Cricket Ground, televised live throughout Australia.

"I want to leave the game on a high and I just think the time is right now," said Waugh, who led Australia to phenomenal 40 Test wins from 53 matches, which included only eight defeats and five draws.

The Australian captain, a role-model for aspiring cricketers the world over, compiled 10,660 runs in 164 Tests at an average of 51.25, being the second highest run-getter behind compatriot Allan Border. He is second to Indian legend Sunil Gavaskar (34) in century makers list with 32 hundreds, three more than Australian great Don Bradman.

His records in the shorter version of the game was equally impressive, collecting 7569 runs in 325 matches at an average of 32.90.

Waugh, who made his debut in international cricket in 1985-86 against India, will end his distinguished career against the same country, should he be selected for the four- match Test series starting on December 4 in Brisbane.

"The upcoming Sydney Test will be my last for Australia should I be selected to play," he said.

During his 19-year international career, Waugh achieved several distinctions, which included leading Australia to a record 16 consecutive Test wins and clinching the World Cup in 1999.

Known to produce his best when the team is in dire straits, Waugh's Test best of 200 came under trying circumstances against the West Indies at the Sabina Park in April 1995.

An emotional Waugh said though he was bit "sad" while taking the decision, he would engage himself in doing other things, which include some more philanthropic works in India.

"There is that element of sadness," Waugh said. "But the overwhelming emotion for me is there is a lot more to do in life and I am looking forward to it." The Australian Test captain said he was keen to raise more funds to start a new school in India after his retirement.

Waugh, who has scored 823 runs from 14 Test matches at 41.25 against India, is an immensely popular figure in India for charity work in Udayan, a home for children of leprosy patients located in the outskirts of Kolkata.

Fondly called as "Steve da" by the inmates of Udayan, Waugh said that the children's home will be the "pursuit of my life".

Today's announcement put an end to speculation over Waugh's cricketing future though the player seemed to be in an imperious form hitting 729 runs at a staggering average of 130 in his last nine Test matches.

There was no immediate announcement on a successor, but Waugh said he believes one-day captain Ricky Ponting is most likely to be the next Test skipper.

"The obvious choice is Ricky Ponting," he said. "He has done a great job with the one-day side. He has been groomed to take over." Waugh said he was now looking forward to spending more time with his wife, Lynette, and three children.

"Lynette, Rosy, Austin and Lily have supported my cricket ambitions in a selfless manner," he said. "I now look forward to spending more time with them in a more traditional family unit.

"I just feel right now I am playing consistent cricket, I'm really enjoying my cricket. My family and friends will be there in Sydney, it's a great place to finish and I think now is the right time," the veteran said.

For Waugh, a series win in India remains the final unfulfilled conquest of his Test career.

Wishing his team-mates well for the 2004 tour of the sub-continent, he said, "It is still going to be a great challenge to the guys going to India next year, and I'll be supporting them and watching them and hope they do well. I just won't be there.