Way back in the 50s, Jawahar Lal Nehru told her, 'tumne Mirza Ghalib kii ruuh ko zindaa kar diyaa,' but now it is just her recorded voice and fading prints of films that would keep her memories alive...Suraiya, R.I.P. 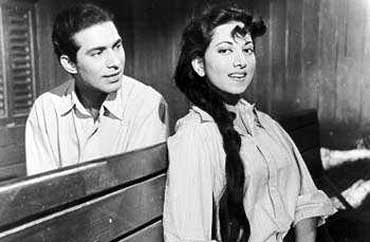 Way back in the 50s, Jawahar Lal Nehru told Suraiya, "tumne Mirza Ghalib kii ruuh ko zindaa kar diyaa" ["You have made Mirza Ghalib's soul come alive"], but now it is just her recorded voice and fading prints of films that would keep her memories alive. As they indeed did for the last 41 years since she was last seen or heard in films since her sudden, inexplicable retirement in 1963 with her swan song yeh kaesii ajab daastaan in the film Rustom Sohrab

Suraiya, the original heart-throb, the last of the real female singing-stars of Bombay film industry, passed away at 9.25 am.today. She was 75. She had been admitted to Harkishandas Hospital in south Mumbai 15 days ago for various health problems including loss of appetite, low blood sugar and general weakness.

Suraita Jamal Shaikh a.k.a Suraiya was born in Lahore in 1929. Educated at the New (J.B,Petit) High School for Girls in Bombay, she studied Persian and the Koran at home. During her school-holidays in 1941, she ended up accompanying her maternal uncle M. Zahoor, a character-artiste, to the Mohan Studios where Taj Mahal was being shot. Somehow, the director Nanubhai Vakil took a liking to this twelve-year old, and she ended up facing the camera as the young Mumtaz Mahal.. That was just the beginning.

Friend Raj Kapoor and neighbour Madan Mohan cajoled her into participating in a children's programme on All India Radio and that is where Naushad sahib first heard her. He used her voice for the film Nai Dunia for the song, boot karuuN mai polish, and chose her to sing for the much-older heroine, Mehtab in Sharda. Mehtab had been nervous that this child singer could ruin her career, little knowing that this child singer would go on to become a singing star in her own right.It was 1942, she was all of thirteen years old and had to stand on a stool to reach and croon into the mike: panchhii jaa piichhey rahaa hai bachpan mera.

Roles in Station Master and Tamanna followed in the same year. But it was in 1943 that she got a role as a singing-star in Hamaari Baat and with Phool released in 1945 she had achieved national fame. But bigger things were yet to come. Ironically, it came playing second fiddle to the singing star of those times, Noorjehan in Mehboob Khan's blockbuster Anmol Ghadi (1946) where Noorjehan had the pick of Naushad's compositions, including the all-time classics such as jawaan hai mohabbat, aawaaz de kahaan sai, aa jaa meri barbad mohabbat ke sahare, mere bachpan ke saathi and kya mil gaya bhagwan. But Suraiya scored and got noticed for the winner, socha tha kya, kya ho gaya. Many would walk into the theatres just to see her sing that song, and walk off once it finished. It might sound cliched and hyperbole, but such was her impact.

Before that she had been noticed by the other singing sensation of those days, K L Saigal who heard her voice at a rehearsal and she acted as his heroine in Tadbir (1945), Omar Khayyam (1946) and Parwana (1947). And then came Partition. She chose to stay back, while Noorjehan migrated to Pakistan. Suddenly, the second fiddle in Anmol Ghadi was the leading lady who scored over other heroines such as Nargis and Kamini Kaushal because she, like Noorjehan and unlike them, could act as well as sing. 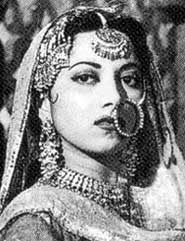 The next two years, 1948-1949 were the best of her career as Pyar Ki Jeet, Badi Behan and Dillagi went on to become big hits, making her the highest paid female star. Just to give you an idea, let's just name some of her songs from this period: woh paas raheiN yaa duur raheiN, o duur jaanewale, tu meraa chaaNd maiN terii chaandni, tere nainoN ne chorii kiyaa,murliwale murli baja... She was the rage.

She evoked the kind of hysteria that can be compared only with Rajesh Khanna in his heyday from 1969 to 1972. Ask any old-timer and they would confirm that people bunked offices, schools and colleges, even shops closed on the opening day of her films, to see her films first day, first show. Actor Dharmendra is on record as having seen her film Dillagi 40 times. Mobs would descend on her if they got wind that she was going to attend a premier. In many ways, this need to stay away from madding crowds was to come in handy later when she retired to lead the life of almost a recluse. But we are getting ahead of the story.

The Dev-Suraiya starrers weren't exactly hits, but they sure hit it off together. The romance had its genesis, appropriately enough, in a theatrical manner - while shooting for a song, the boat they were on capsized, and Dev Anand rescued her from drowning. But it was a doomed love-affair. Her family was dead against it, stories circulated about opposition and objections from the family - one story had her grandmother flinging the ring given by Dev into the sea. Dev, after years of waiting, finally married, while she chose to remain a spinster. Recently, on NDTV's Walk the Talk programme, Dev Anand was uncharacteristically nostalgic and wistful when speaking about his falling in love and obsession for her. In 1950, finally came a film, Dastaan, with child-hood friend Raj Kapoor, who by then had made a successful pair with Nargis.

But perhaps the doomed love affair was taking its toll on her career and performance. In 1953 she acted opposite Mukesh in Mashuqa but 1954 in a way was her comeback year with Nitin Bose's Waris (where she co-starred with another wannabe singing star, Talat Mehmood - see picture above) and Sohrab Modi's Mirza Ghalib in 1954 for which she got the President's gold medal and the accolade from Nehru mentioned above.

Many great voices - from Begum Akhtar to Rafi to Mehdi Hasan to Iqbal Bano and, why, even Lata - have sung Mirza Ghalib's poetry, but those who first heard the songs from this movie, still swear by them. Her romance with Dev and its doomed nature figured even in small town gossip and it was not surprising therefore for people to hear what they wanted to hear when she sang, yeh naa thii hamaarii kismet, dil-e-naadaan tujhe huaa kyaa hai, aah ko chahihiye ek umar, nuktachiiN hai gham-e-dil. She was just 25, but never did recapture her glory years again. But she did produce some hit songs.

In 1963, she was just 34 when she chose to retire from films and singing; living the life of an almost recluse, showing up at rare, select film parties. Rustom Sohrab, proved to be her swan song, when she signed off, appropriately enough with perhaps one of her most popular songs, yeh kaesii ajab daastaan. Yes, kaisii ajab daastaan indeed.