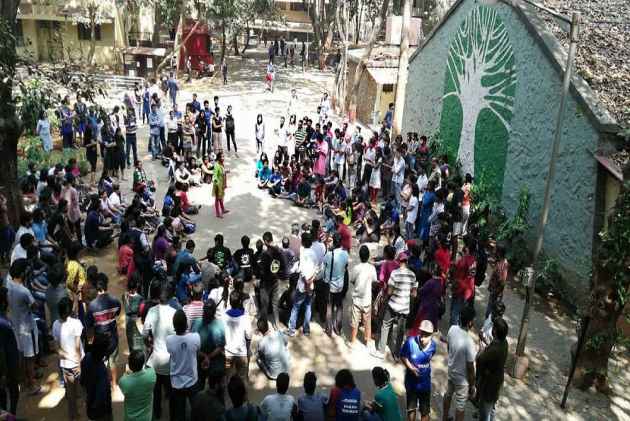 The ongoing students’ union protests against the Tata Institute of Social Sciences (TISS) administration’s move to withdraw financial aid provided to students from SC, ST and OBC communities has entered the sixth day on Monday.
The protesting students are refusing to call the strike off before the institute agrees to all their demands. The Indian Express reported that while the protest is anchored by students in the institute’s Mumbai campus, agitations continue on the other TISS campuses — in Tuljapur, Hyderabad and Guwahati.
On February 20, TISS students’ union president Archana Soreng had announced that the unions across campuses will go on a strike from February 21.
“All talks and mediation with the administration over past many months have failed. We call for boycotting all classes, field work and submissions…The Centre’s Post Matric Scholarship (GOI-PMS) issue stands unresolved since the institute has notified its withdrawal from all forms of financial aid to students,” she had claimed.
“Now students, both current and newcomers, will have to pay their full fees even as they wait for their state scholarship amounts to come,” Soreng said.
The union has demanded that the institute retract a notification, asking students of 2016-18 and 2017-19 batch eligible for the GoI-PMS to pay their tuition, hostel and dining hall fees. The union has also sought that the upcoming batch of 2018-20 be exempt from the new rule, where GoI-PMS eligible students pay their fee upfront. Apart from these, the union has sought symbolic representation of SC, ST and OBC students in the Social Protection Office of TISS.
The Indian Express added that faculty members, alumni and student bodies of various institutes across the country have also extended their support to the protests.
“We want all four of our demands met, unconditionally and will not give in. Students are anguished and frustrated,” said Fahad Ahmad, general secretary, TISS Students’ Union.
“This will be a failure of the department of social justice and empowerment if students are not able avail of the existing scholarship schemes or if funds are not released for the benefit of SC, ST and OBC students,” said Ahmad.
“If our talks with the institute administration fails, we will gherao the residence of Ramdas Athawale, minister of state for social justice and empowerment,” Ahmad added. The TISS administration, however, denied having stopped any scholarships and said that it continued to follow the central government guidelines on student welfare.
The Times of India reported that the protesting students also started a Twitter campaign from 3 pm on Sunday with the (hashtag) #injusTISS.
More than 200 first-year students the School of Social Work- 95% of the class strength also backed the protest on Sunday. Students of first-year have decided to boycott all submissions, presentations and exams until the issue at hand is resolved. Students claimed that the administration had been moderating all mails sent through their union's mail and also allegedly refused breakfast supplies in the hostel, added the report.
(With PTI inputs)