The home minister on swadeshi outlook in economic reforms, Hurriyat and much else 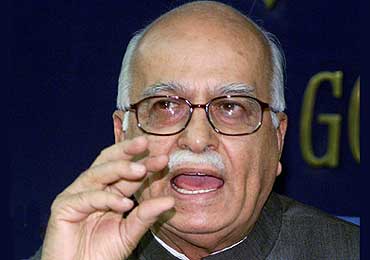 Home minister L.K. Advani was in Chennai to address the 165th Annual General Meeting of the Madras Chamber of Commerce. Following are some of his statements on various subjects during his visit to the city as reported by agencies:

On Hurriyat and Elections
"There is no no question of holding elections in Kashmir under international surveillance.....The way polls had been conducted has been admired the world over."

On Pakistan
Describing the invitation to Musharraf a major  initiative, he said it was a "motion forward and something positive is certain to emerge out of the discussions though it may not be end of the tunnel".

Calling it an integral part of the centre's strategic perspective to establish durable peace for the entire south east asian region, he added: "We sincerely hope that Pakistan reciprocates this perspective"

Referreing to the proxy war the country was facing from its neighbour over a decade, Advani said it is "worse than an actual war" The government is following a "bold policy" aimed at ensuring peace in our borders and a strong internal security environment, he said, adding that this was an imperative need for the country's economic progress.

Tamil Nadu Governor
Asked about the demands of DMK and BJP for the recall of Tamil Nadu governor for swearing in Jayalalitha as the state chief minister, he said there was no such proposal before the government. The prime minister had already expressed his views on the matter, he said.

"The constitution conferred certain powers on the governors. There is no question of government of India approving or disapproving governor's action. If there is anything, it will be decided by the court," Advani said.

Ban on Tamil Ultra Groups
Asked about the centre's stand on Tamil Nadu government's demand for a ban on Tamil ultra groups TNLA and TNRT, he said the matter had been discussed with chief minister Jayalalitha during her recent visit to Delhi and it was being examined, he said.

Next Taiwan
Commenting on the impressive strides being made by the  state of Tamil Nadu in many areas of commerce and industry, he said "seeing Tamil Nadu's prowess in IT and other high-tech areas, I think you could perhaps even replicate Taiwan as a supplier to the world".

Calling for greater harmonisation among the economies of Tamil Nadu, Kerala and Sri Lanka, he said that the combination of these three economies would provide the right mix of  capital, labour and raw meterial which could supply not only  the rest of India and South-East Asia, but also parts of other world like Africa and East Asia thanks to this region sitting astride important trade routes.

Swadeshi Outlook
During his address to the MCC he asserted that the economic reforms being pursued by the centre with "great vigour" were guided by a "swadeshi outlook" and were not at all "a plunge into globalisation".

"We recognise that protection and promotion of India's national interests ought to be the supreme objective informing all our policies and schemes."

Recalling that the country had always been against the uncritical emulation of foreign models -- be it Soviet model of the past or the American model of the present -- he said government was promoting a rather "caliberated globalisation" taking into account the developmental status of the complex social fabric of the country, the interests of the small industries and agriculture.

He said India should chart out its own independent path receiving positive inputs from anywhere and everywhere, but principally guided by its own national genius and sound consideration of its own needs and resources.

The government was fully aware that WTO regime also has its negative aspects, Advani said adding "our model of economic development must principally aim at the creation of productive employment, removal of inequalities, active promotion of social justice for dalits, tribals and other under-privileged people and preservation of environment".

Casio Digital Diary
Readers would recall that his  swedeshi credentials  were once questioned when he had been photographed using a casio digital diary some time ago. The  concept of swadeshi is being misconceived in such narrow ways by many,  Advani claimed, recounting the episode.

"Swadesbhi is not a closed concept" he said, adding that even the economic reforms being persued by the centre were guided by a swadeshi outlook.

Consensus Building
Advani said that the country had gained immense experience of the economic reforms carried out by different governments at the centre and various state governments, adding that this combined experience had both positive and negative lessons.

Stating that the NDA government at the centre continued to follow a consensus approach, he appealed to the business  community, the trade unions, political parties, social organisations and intelligentia to contribute to this process of consensus building, especially to accelerate and expand the scope of economic reforms.

He said that the goverment was committed to altering labour laws of the country to pave way for a conducive atmosphere for economic development and ensuring a better work culture adding that the government would strive for a consensus on this issue also.

Constitution Review
He said the centre's decision to review the constitution did  not mean changing the basic structure of the constitution. The review was intended only to make "necessary" changes in the light of the country's experiences,  Advani said.

"The government wanted to make wholesome amendments and not piecemeal ones", he said, adding that "this is what we have in mind".

Democracy and China
He said the country could achieve economic progress only through democracy which he said was the most "vibrant" one in the entire world despite the country's heterogenous character and massive illiteracy.

Referring to the economic development in China, he said there was a basic difference between China and India. China's economy had opened but its polity still remained closed. The model was not suitable to the country, he said adding one day or the other, China should open up its polity also. This was what happened in some communist countries, including Russia, he said.

Sri Lanka
The home minister said the centre also wanted an early end to the ethnic conflict in Sri Lanka based on a just solution, satisfying the interests of all, as part of the country's commitment to ensure durable peace in the region.

Internal Security
On internal security, Advani said the centre was ready to fully support the state governments in their efforts to strengthen law and order.

Advani said the centre had been working actively with the states and also trying to strengthen co-operation among states to effectively deal with challenges of terrorism, extremism and subversive elements.

Veerappan
All help had been assured to tamil nadu chief minsiter jayalaitha for nabbing forest brigand veerappan either by the tamil nadu government alone or jointly with the karnataka government, he said. "The veerappan issue is not something that affects tamil nadu and karnataka alone but the entire country" he said.

Later answering a question from the audience he said the union cabinet was yet to take a decision on appointing the chief of defence staff as recommended by the group of ministers on security. "The prime minister will discuss the issue in the  cabinet and with opposition leaders to arrive at a consensus on the matternvitation to musharraf a step forward for ensuring peace

Sindhu Darshan: Oozing 'warmth and friendship'
Earlier in the week, when he was in J&K for the Sindhu Darshan function, he had recalled his visit to Leh the previous year:

"Last year, both Vajpayee ji and I were here. When he dipped his hand in the Sindhu here, I told him that if Musharraf was doing the same thing in Pakistan at that very time, he would feel Vajpayeeji's warmth and friendship flowing towards him."

He told the ambassadors of Norway and South Korea, who were present at the function, that he hoped the Sindhu river, which begins in Tibet and flows to Batalik and from there into Pakistan, would become an instrument of unity not just within the country, "but also between countries like, say, India and Pakistan."