If Musharraf has the army and ISI by his side no politician in Pakistan could prevent him from an adventure in Kashmir. It is in this context that India must respond to the domestic crisis in Kashmir. 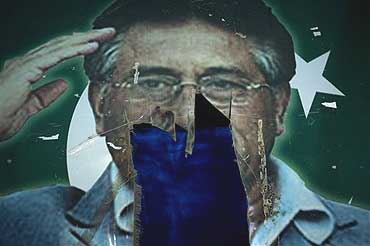 Another ceasefire violation by Pakistan has occurred in Kashmir. There have been several recently. Is there a design behind these violations? A major crisis with Pakistan in the days ahead cannot be ruled out. The reasons for it are complex. To understand why one must go back in time.

This scribe had held that a silent struggle between America and China to set Pakistan’s future course was under way. On June 27, 2007 he wrote in these columns: "The symbiotic economic relationship between the US and China is so deep that economic disaster in one could cripple the other. At the same time the security interests of both nations are coming in conflict. Both nations are attempting to resolve conflicting security interests without upsetting the economic applecart. The battlefield of this carefully calibrated struggle is Pakistan. A silent proxy war between the US and China is under way there. President Musharraf stands in the middle."

That struggle is out in the open. And President Musharraf no more stands in the middle. The day he assaulted the Lal Masjid he got off his neutral perch. The Lal Masjid clerics were loyal to Baitullah Mehsud. The latter’s brother masterminded the attacks against Chinese workers in Baluchistan and Islamabad. After Chinese workers were killed Beijing cracked the whip. Musharraf who had resisted similar pressure by the US to counter the Taliban in Afghanistan reacted with alacrity. He ordered the Lal Masjid assault.

This scribe had attributed Benazir’s assassination to her declared agenda – to create a European style South Asian Union that would include India, Pakistan and Afghanistan. That is why he dismissed Pakistan’s allegation that Mehsud was behind her murder. Mehsud had denied the allegation and there was no reason to disbelieve him. Instead the pro-Al Qaeda elements including those in the Pakistan army and ISI were identified as the likely suspects because they had a motive.

In recent days the CIA charged the ISI with aiding the Taliban militants and organizing the bombing of the Indian embassy in Kabul. Prime Minister Gilani made a ritualistic denial of this charge. Clearly he is not equipped to take on the ISI. His attempt to place the agency under civilian control was farcically reversed within days. But Musharraf has leapt to the defence of the ISI and in good measure accused India of fomenting the unrest in Baluchistan. For both China and Pakistan it is much easier targeting India than America.

However, it transpires that within closed doors Musharraf, General Kayani and ISI chief General Nadeem Taj did accuse the US of aiding terrorism in Pakistan. According to The News of Pakistan, impeccable sources had informed the paper that the Pakistani leaders had unburdened themselves to two senior US officials in meetings held on July 12th. The paper reported that the Chairman Joint Chiefs of Staff Admiral Michael Mullen and CIA Deputy Director Stephen R. Kappes carried "what were seen as India-influenced intelligence inputs". That "hardened the resolve of Pakistan's security establishment to keep supreme Pakistan's national security interest even if it meant straining ties with the US and NATO". The report added: "The Americans were not interested in disrupting the Kabul-based fountainhead of terrorism in Baluchistan nor do they want to allocate the marvelous Predator (unmanned armed aerial combat vehicle) resource to neutralise the kingpin of suicide bombings against the Pakistani military establishment now hiding near the Pakistan-Afghan border." The US officials were asked why the CIA-run Predators were not deployed after the exact location of tribal leader Baitullah Mehsud had been provided to them.

It is in this context that Musharraf has accused India of fomenting unrest in Baluchistan while ceasefire violations by the Pakistani army have increased. Impeachment of Musharraf is being discussed by Asif Zardari and Nawaz Sharif. Musharraf has cancelled his visit to the Beijing Olympics. Musharraf has seized the moment to strongly defend the army and ISI in order to counter his political opponents. After his recent visit to China he is probably confident of full support from Beijing. Rubbishing US allegations against the ISI seems to indicate that. To isolate the US in Pakistan and consolidate support from Beijing nothing could be more effective than even a small adventure against India along with false accusations of its imagined role in Baluchistan which, thanks to the Gwadar port and mining rights, is deemed crucial by Beijing.

Musharraf’s previous record in Kargil and in the coup he staged against Nawaz Sharif reveals a gambler capable of taking any risk to preserve his power and position. On both occasions Beijing supported him. It could do so again. If Musharraf has the army and ISI by his side no politician in Pakistan could prevent him from an adventure in Kashmir. It is in this context that India must respond to the domestic crisis in Kashmir.