'A Welter Of Images And Thoughts And Questions'

The author of Sacred Games talks about his sense of both shock and déjà vu as he witnessed the terrorist attacks, and the questions it leaves him with -- the story we have been told, the motivation of the attackers, the true villains and heroe 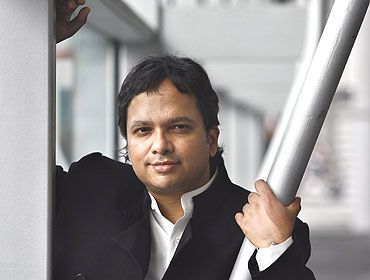 Vikram Chandra’s epic novel on Bombay, Sacred Games, is a sweeping narrative about a dreaded don, religious violence and a single cop on the trail of a crime that could culminate in a terrifying attack on the city. His book portrays the city’s rich and privileged as well as its wretched and starving. It has shootouts, blood, gore and brutality, but is also a tender vision of a place that is at its most beautiful when unexpectedly threatened. Chandra, currently based in California, was in Bombay on November 26. In an interview with Omair Ahmad, he talks about his sense of both shock and déjà vu as he witnessed the terrorist attacks, and the questions it leaves him with -- the story we have been told, the motivation of the attackers, the true villains and heroes of the siege, and where we go from here.

Part of Sacred Games revolved around the threat of a terrorist attack and its motivations...

I’ve had a strange feeling of déjà vu over the last few weeks, as Hemant Karkare and the ATS released details of the alleged involvement of various swamis in the Malegaon blasts; of course I was reminded of the Swami in Sacred Games who yearns for a final conflict, an apocalypse. The swami offers the gangster Ganesh Gaitonde a narrative about the world that fills it with meaning, that makes Gaitonde believe that his own life has a purpose. This guru’s version of history ends with a war to end all wars, a final holocaust which will usher in a golden age.

What you need to make a human being into a terrorist is also a persuasive narrative about history, a story of wounds suffered, overlooked grievances, stolen lands. A narrative about that perfect world which is worth fighting for, about that heaven which lies on the other side of a glorious death. The men who brought terror to Mumbai last month were also followers of an apocalyptic ideology, who long for a utopia that resembles, at least in its general outlines, the utopias foreseen by ideologies that seem very different. What the extremists on both sides want is escalation, more violence, more horror. In a sense, they need each other’s atrocities.

The shadow of Partition looms in the background of your book. Does it loom over these attacks as well?

This latest atrocity is the most recent escalation of a war that began at Partition, that has been flaring up, in one way or the other, for all these decades. This conflict has been profoundly complicated by the introduction of many other actors and events -- the Soviet Union in its invasion of Afghanistan; the Americans who helped the Pakistanis in the creation of the various mujahideen outfits and the Taliban; the ongoing bloodshed in Kashmir. All of these factors have fed into and interacted with our own recent history -- the rise of the Hindu right; the increasing power of organized crime; the destruction of the Ayodhya mosque; the riots and the bomb blasts; the various fidayeen attacks within the country; the Godhra horror and the subsequent pogroms; the 2006 train bombings in Mumbai...

So what happens on the streets of this city originates from events very far away, in geography and history. Of course striking here damages the commercial capital of the country, but its symbolic importance cannot be overstated; it’s like you’re hitting New York and Hollywood at the same time. Success in these actions attracts new recruits, money, support.

The real hero of your novel is a policeman, doing his best in difficult circumstances. Who do you see as the heroes of the past week?

I’m not sure "heroes" is the right word; in my mind, at least, it always simplifies too much. What we saw were ordinary people who reached beyond themselves to help others. There were of course moments of fear and indeed cowardice, but also moments of extraordinary grace and selfless courage. And the police -- these underpaid, undertrained, and under-armed men and women, who we love to criticize and make fun of, who we correctly excoriate when they abuse their power -- were our first line of defence. The same man who takes bribes, whose very uniform is feared, can and will put his life on the line. This is the baffling and humbling nature of human beings, I suppose.

How do you see the villains--naïve people who allowed themselves to be manipulated, or just bloodthirsty brutes?

Neither. Either conception is too easy, and both allow ourselves to distance ourselves, to expel these men to the realms of our imagination populated by unthinking savages or monsters. They are human beings just like ourselves, who believe in a certain narrative about the world and what lies beyond, who have certain ideas about what is valuable and what is not. It’s very hard for us to imagine that cruelty and violence can spring from the ordinary; it’s much easier to believe that people like this are "in thrall" to evil, or that they belong to another species given to death and destruction, while we ourselves are self-reflexive and capable of reasonable and logical thought. But even if only to combat and kill this enemy, you must try to understand his world-view, his experience, his strategy and tactics.

Understanding does not equal forgiveness. Not at all. But if you think you’re fighting monsters, you’re fighting the wrong battle. You’re then in a war with your own fear, and not the grimy, banal reality of the opponent’s everyday life, his very human attachments and desires. You’re bound to over- or under-estimate his capabilities, and make mistakes about his intentions.

How do you see the current outpouring of anger at the politicians, and at the world of intelligence?

In the festival of finger-pointing and blame-dodging that is going on right now, it is tempting for writers, journalists, public intellectuals -- all of us in the chattering classes -- to be puffed up with the wisdom of hindsight, and to portray these agencies as groups of bumbling idiots. The agencies, on the other hand, would like us to believe that they have everything under control. I’d be cautious of either extreme; the truth is probably somewhere in the middle.

This game of shadows is inherently confused, messy, built on deception upon deception. Sometimes you see what is coming, sometimes you deceive yourself. Last year, in what Praveen Swami has described as a "superbly crafted intelligence operation," eight fidayeen were arrested as they came across the coast near Mumbai; this year, everything went wrong. I’m no expert, but obviously everything that has been revealed about the lack of coordination, the lack of sharing of data, the lack of a central command in crisis situations, has to be learnt from.

What interests me especially, though, is the fact that there was too much information, rather than too little. This is increasingly the problem in an age when low-cost technology permeates the geography we live in. You can have thousands of video cameras watching a city, but how do you notice an anomaly in all that footage? Do you have enough human eyes to scan it all, or to read all the thousands of emails you can catch in your filters in a few hours? How do you hear the three crucial sentences in all that sat-phone chatter, especially when your opponent knows you are listening and intentionally creates more meaningless chatter? How do you know which alert to pay attention to, out of all the dozens that land on your desk every day?

The problem of intelligence has always been separating the data from the noise, which is why an analyst sitting at a desk buried in reams of paper is a much truer picture of this work than the dapper secret agent leaping from a helicopter. More and more, the only way to sift through everything you can collect is to use yet more technology -- software agents, visual matching programs -- at least in the initial stages.

Has this attack had an impact on you as a writer, and as a resident of the city?

It’s hard, right now, to have a coherent response to the event; I’m left with a welter of images and thoughts and questions.

I wonder why we’re calling this "India’s 9/11," when the 2006 train bombings caused as many deaths. It then occurs to me that this attack was scripted very differently -- the killing began at CST, but the locations chosen for the final shootouts were luxury hotels and a Jewish house of refuge. So the intended victims this time are not just the lower and middle classes, but the rich and a certain type of foreigner.

As I watched, I noticed that the narrative produced by the television channels and newspapers devoted much more character development space, if you will, to a certain kind of person. There’ve been dramatic stories about ex-models who narrowly escaped, but the people at CST remain curiously anonymous, finally just a statistic. I now have a certain idea about the kind of person Major Unnikrishnan was, but Havaldar Gajendra Singh remains just a name and an ID photo. Why?

From what we’re being told right now, the attackers were told to draw out the firefight for as long as possible. So it was a kind of grotesque theatre, a "spectacular" produced for the electronic media. And of course it was enormously successful. We all watched.

Then I think again about the event as a swirl of human suffering, and the suffering as spectacle. About the cell phone calls and text messages flowing in and out of the hotels, and -- we are told -- the handlers of the attackers watching the attack on television and calling in tactics and orders. My friends calling and texting me. Me, trying to call sources, people who maybe would know more than I do. Everyone with questions. I think that’s all I have right now.