'A Very Serious Threat To Us'

'My mother in law and my husband lived and died for the country. I don't believe they wished to die in any other way'. The Congress president on her party's prospects and the new Gandhi generation. 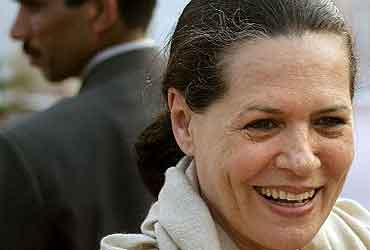 Faisal Mohammed Ali: Yesterday Rahul Gandhi filed his nominations - if he wins and you also win, I think it’d be the third time after Indira Gandhi-Sanjay Gandhi, Indira-Rajiv Gandhi that members of two generations of your family would be represented together in the Parliament. How is the feeling?

Sonia Gandhi : I am now standing from Rai Barielly. It’s a very special feeling since this is the constituency from where not only my mother in law was a representative but my father in law Feroze Gandhi too. This in a way is a more historic constituency because it was from the time of Moti Lal Nehru and Jawahar Lal Nehru that the political activities of the freedom struggle started - for instance the salt ‘satyagraha’ was started here at Rai Barielly by Panditji and all his colleagues.

Faisal Mohammed Ali: A few members of the Gandhi family have been killed earlier. Do you think that your family is in danger since you are in a similar situation now?

Faisal Mohammed Ali: What are your expectations from the elections from the whole country? Do you think you are going to form the government in alliance with anybody?

Sonia Gandhi : We’ll certainly fight with that aim in mind and we will try our best.

Faisal Mohammed Ali: You are trying to form alliances but except in the South where your alliance with DMK seems to be working, your alliances in other areas could not succeed - for instance the one with BSP in the past..

Sonia Gandhi (interrupts): We have alliances in Maharashtra, as you know, and one in Bihar. Yes, in U.P. we do not have an alliance but, as I said before, if we cannot come to an understanding with either of the parties here then we would fight on our own and here we are - fighting on our own without fear.

Faisal Mohammed Ali: In the era of coalitions do you think you will be able to muster enough majority on your own?

Sonia Gandhi : We certainly look to work with an alliance in U.P. The Congress party has done its best to try and work out an understanding but then the response was not positive.

The Republic Of Hurt Sentiments