A Twist In The Tail

Apart from its over-confidence -- even arrogance -- and the bête noire Om Prakash Chautala's INLD, Congress had its own Raj Thackeray equivalent in Haryana: the Bhajan Lal clan 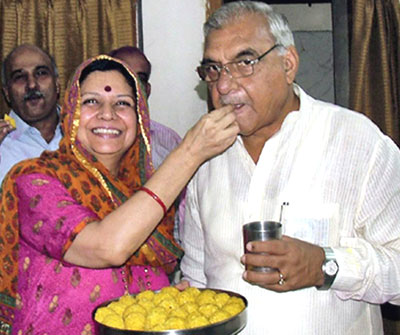 “If the Congress gets less than 40 seats in Haryana, there will be a twist in the tail,” said a bureaucrat, keeping a close watch on the election results, alluding to the many challengers which chief minister Bhupinder Singh Hooda is facing from within his own party.

The party has got just that but the twist has come not so much from within its own ranks but bête noire Om Prakash Chautala of the Indian National Lok Dal (INLD) who has defied all poll predictions to notch up an impressive improvement over just 9 seats which he won in 2005 -- even though he is far short of the halfway mark of 45 seats, having won just 32.

More importantly, he has already turned the heat on Hooda by stating that he too is a contender to form the government. The Congress with the help of 7 independent legislators or one of the smaller parties like Haryana Janhit Congress (HJC) led by former Congressman Bhajan lal, will easily be able to form the government, but Chautala has now emerged as a formidable opposition. And given Haryana’s murky politics and culture of ‘aya rams and gaya rams’, it portends a rocky time ahead.

Chautala has not only won from both the constituencies which he contested ie. Ellenabad and Ucchana Kalan but has also trounced Hooda’s finance minister Birender Singh. His elder son Ajay Chautala has won from Dabwali. The party is now eyeing Bhajan Lal’s HJC as also the independents. Chautala’s game plan will be to prevent these two entities from supporting the Congress so that his party gets the second call from the Governor.

For Hooda’s it’s a tough time. His gamble to go in for early assembly elections (seven months ahead of schedule) just because the Congress put up a spectacular performance in the Lok Sabha winning 9 out of 10 seats did not pay off too well. His detractors within the party will be snapping at his heels and he has quite a few of them now. The carefree days of a free run to rule the state too are over. He will definitely have to pull up his socks and provide a more efficient government this time around, if he wants to keep his head above water.

Worse, Chautala’s good showing is evidence that the all important Jat vote which Hooda was hoping to consolidate around him hasn’t really given up its loyalty to the legacy of Devi Lal which INLD holds. Despite a conscious effort to cultivate a pro- Jat image and thereby emerge as a leader of this dominant community, Hooda’s cherished desire to achieve this status has become elusive once again with this election.

'Aisa pehli baar hua’ was the Congress’s election jingle, as it talked about the Hooda government’s development initiatives. As it turned out, the massive deployment of men and machinery which was working for the last many months could not disseminate the message properly. Or it could be that the people, fed up with poor governance and rising corruption, were just not in a mood to listen to it

The Bhajan Lal clan too enters the assembly as an independent political formation, the HJC. It has won six seats and Bhajan Lal’s son Kuldeep Bishnoi who has worked hard at the new party has won from Adampur. His mother Jasma Devi though could not win against Sampat Singh from Nalwa. With both the Congress and the INLD eyeing its legislators, the HJC gains in importance. Much will depend on how the wily though infirm, Bhajan Lal plays his cards.

Many used to describe the Hooda government with its absolute majority as a staid, even dull dispensation where spectacular development initiatives were not an urgency, nor was the party enlivened up by any major factional wars.

All that is set to change.

An Open Letter To Noam Chomsky