'A Total Fraud On The Constitution'

A more stinging reprimand and rebuke could not have been expected. The Supreme Court advances the date of the floor test in Jharkhand assembly to March 11, orders video-recording of the proceedings of the floor test, and virtually stays any move to n 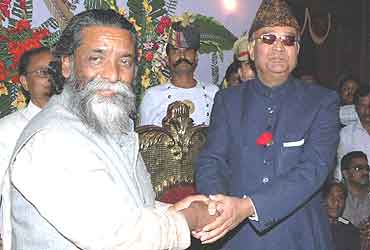 In a major embarrassment for the Jharkhand governor and the UPA government, the Supreme Court has ordered the floor test in the Jharkhand assembly on March 11, instead of March 15 as earlier "preponed" by the governor.

A more stinging reprimand and rebuke could not have been expected. A three-judge bench comprising Chief Justice R C Lahoti, Justice Y K Sabharwal and Justice D M Dharmadhikari went on to say, "If what is stated in the petition filed by Munda is true, then it is a total fraud on the Constitution."

The bench said it was passing the interim order as Munda, who filed the petition challenging governor Syed Sibtey Razi's action in inviting Soren to form government, has proved a "strong prima facie case". The bench also virtually stayed any move to nominate a representative of Anglo-Indian community as a member of the house by saying this could wait till a "legitimate" government took over after the floor test on March 11.

The bench advanced the floor test date to March 11, while expressing its bafflement at why the governor had given five days more to the Soren government to prove its majority even though the MLAs were to take oath on March 10. The governor had himself advanced the floor test date from March 21 to March 15 after he was summoned by the President in the wake of controversy over his decision to invite Soren to form the government despite the claim of NDA to have majority support. NDA had later paraded their strength before the President.

The court, while ordering video-recording of the proceedings of the floor test, said its interim order would be regarded as a notice for convening of the assembly and no separate orders would be required for this purpose. Warning that "any disturbance during the floor test would be viewed seriously", the bench asked the pro-tem speaker to "faithfully" announce the result of the floor test.

The bench, which passed the order on the line of an earlier apex court order for a composite floor test in Uttar Pradesh in 1998, also directed the Chief Secretary and the Director General of Police to "see that all elected MLAs attended the proceedings of the assembly freely, safely and securely without any interference by anybody".

This order came after counsel for Munda, senior advocate Mukul Rohtagi, alleged that the governor had given a long time to Soren to prove his majority in the house to "indulge in horse trading". His petition had argued that the governor's action of asking JMM-Congress, having a combined strength of 26, to form the government despite the NDA getting 36 seats in the assembly amounted to a murder of the constitutional conventions of inviting the single largest party or alliance to form the government.

The bench, which was considering appointment of a retired Supreme Court Judge as an independent observer for the floor test as requested by Rohatagi, was understandably livid when senior advocate A M Singhvi, appearing for the state government stated that the courts have no role to play at this juncture. Singhvi said all allegations made by Munda in his petition were "assumptions" and that it would not be proper to appoint an observer for the floor test as "the court would not like Parliament to appoint an observer to watch the hearing in a case."

"Have you followed the political developments relating to Jharkhand? The manner in which the Chief Minister is appointed and then time given till March 21 for proving majority; the manner in which a perturbed President summons the governor; how can we shut our eyes to all these?" the bench asked.

Referring to the controversy over nomination of an Anglo-Indian representative, Singhvi said it had been a practice all along, even the Vajpayee Government and the Nitish Kumar government had done it prior to the trust vote. Saying that the DGP of the state was duty bound to provide security to the elected MLAs, he requested the court not to tinker with the constitutional powers vested in the governor and speaker for conducting the assembly.

The Supreme Court's order has left the legal experts divided -- some think it would would clear the air of uncertainty, while others argue that such "interference" by courts in the legislative arena would lead to a major controversy. The latter argue that it amounts to "infringement of the internal functioning" of the House and that the apex court has "overstretched" its jurisdiction in directing the pro-tem speaker for video-recording of the assembly proceedings.

However, there are many such as P P Rao and former Law Minister Shanti Bhushan who hailed the apex court order on all points, arguing that advancing the floor test is correct. Differing with them, noted Constitutional expert Rajeev Dhavan argues that no prima-facie case was made out for the apex court to "interfere" with the decision of the governor who had fixed the date for the trust vote.

"It was not for the Supreme Court, which was not apprised of all facts, to assume that the governor's decision was wrong nor was it appropriate for the court to command the legislature to do or indicate how it should conduct legislative proceedings," he said adding that "it is for the legislature to decide the nature of confidence debate".

"Controversial issues can arise if the speaker or the legislative assembly invokes rights under Article 212 (2) and did not agree to advance the trust vote to March 11 or disagree on the issue of video-recording of the proceedings which is an internal matter of the legislative assembly," he argued. Dhavan is of the view that the Supreme Court should be "very circumspect" and respect the autonomy of constitutional authorities like governor and legislature over which "it has only limited jurisdiction, if at all".

To which of course one could always add that constitutional authorities such as the governor need to honour the constitutional proprieties as well, so that such a situation does not arise in the first place. While the constitutional separation of powers between the judiciary, executive and the legislture would obviously become the subject of debate with this interim order, experts such as P.P. Rao passionately argue that the Supreme court direction in this particular case will clear the air, and that an important aspect on governor's power was not touched in the Jharkhand issue. "Nobody seems to have raised Article 361 of the Constitution which gives immunity from challenging in court of law a decision taken by the governor and the decision which is taken on the advise of council of ministers. In this case, governor Syed Sibte Razi took the decision to appoint Shibu Soren without the advise of any council of ministers, and this was not raised before the court". Shanti Bhushan concurs and feels that "the Supreme Court order will cause no harm to anybody as there would be total transparency if one goes by it". Amen

with inputs from PTI

Where's Democracy In All This?