A Temporary And Tenuous Truce

But is it for real? A coach whose charges have been called "far from the truth". A captain who made a public spectacle of himself. Isn't it time to get real? The BCCI, we know, isn't. 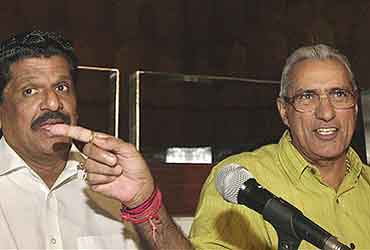 Indian cricket administrators have forged a temporary and tenuous compromise between the warring team captain Saurav Ganguly and coach Greg Chappell. The Board of Control for Cricket in India's six-member review committee appears to have succeeded in giving the two key personnel some more time to strike a working relationship.

"The committee discussed everything in detail and was of the view that cricket is to go forward," Board president Ranbir Singh Mahendra said after a four-and-half hour meeting. "Both coach and captain have to work out mutually and a professional working relationship is to be maintained, and for this performance will be the criterion. This applies to the captain, it applies to the coach and the players. The committee kept the interests of Indian cricket in mind in making this decision."

By the looks of it, the peace will be fragile and that may not be the happiest thing for Indian cricket. It is significant that neither Ganguly nor Chappell made a joint statement after the compromise was reached. They seem to have realised that they had little option but to accept the peace plan and try to move on. If they had disagreed, the possibility of both men losing their jobs was strong and neither wanted that at this point of time.

Curiously, while the Board president took pains to clarify that the references (in Chappell's report on the incident and in his tour reports) to Ganguly faking injuries were the result of miscommunication, he did not speak with as much assurance when asked about the other serious allegations that Chappell made against the captain.

"I would also like to clarify some of the points with regard to injuries attributed to Ganguly and after hearing the concerned people, the committee came to the conclusion that there is some miscommunication and whatever has been stated is far from the truth. At the conclusion of the meeting the coach and the captain were together and have assured the Board that they will work together in the interest of Indian cricket."

Can they do that? Will it be easy for them to share a common goal after baring their fangs to one another? They do say that relationships that kick off on a discordant note blossom at a later stage. Fans of Indian cricket can only wait with bated breath for this to happen and that the team will find its winnings ways against top class opposition again.

The one good thing that may have happened at the meeting is for the committee to define the roles of the captain and the coach. "We have demarcated the difference in roles between the captain and coach. The captain has to control the game. The coach has to do his own job," Mahendra said "When mutual trust is there, then both can discuss each and every thing pertaining to the game. We cannot presume that there is no trust. They (Chappell and Ganguly) are confident that they will do it. Both coach and captain are happy with the arrangement and the committee is confident of them working together."

From Ganguly's point of view, it can be easily said that he will be under enormous pressure to deliver in every series, both with the bat and as a leader of men. First up in the seven-match one-day series against Sri Lanka from October 25. Ganguly will be aware that with a coach baying for his blood, he will have to perform at close to his best to keep his position in the team.

Chappell, on the other hand, bit the bullet in accepting to forge a working relationship with Ganguly. For someone who ostensibly had such serious reservations about Ganguly's mental and physical state, the Australian may have to shed his inhibitions and find ways to work with the man he has accused of attempting to divide and rule.

Chappell will be aware that sections within the team and the Board have not taken kindly to his admission of enquiring from a number of the players what they had thought of Ganguly's retirement in the warm-up game in Mutare. They have seen this as an attempt to rally opinion against the captain.

It is not known if Chappell presented the committee with documents to show how Ganguly fell well below the acceptable level in areas of batting, bowling, fielding and captaincy that embody the 'Commitment to Excellence' theme that he had espoused at his interview.

Chappell has had some serious reservations about the attitude of some players and about Ganguly's ability to take this team to a new high. It will be surprising if his views have changed after a meeting with the review committee. To believe that the dressing room will transform to a happy place in a jiffy is to fool oneself.