...between those who are directly involved in terrorism, and others - even where these others may include some elements sympathetic to the extremist cause, but who are not associated with any terrorist or criminal activity - is the most fundamental p 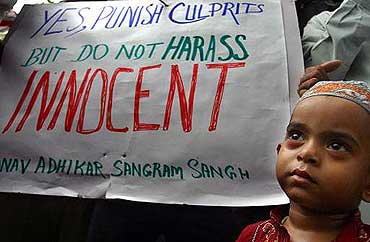 In every theatre of terrorism, the separation of the terrorist from the larger community is the first imperative of effective counter-terrorism responses. No quantum of lawful force against the terrorist is unnecessary, and there should be no reluctance to use every legitimate instrument and power to bring the perpetrators and facilitators of terrorist acts to book. As Prime Minister Manmohan Singh has expressed it with exceptional clarity, "There can be no political compromise with terror. No inch conceded. No compassion shown."

But the state's actions must be narrowly targeted, and must never bring the innocent and wider community into their sweep. A surgical separation between those who are directly involved in terrorism, and others - even where these others may include some elements sympathetic to the extremist cause, but who are not associated with any terrorist or criminal activity - is the most fundamental principal of a war against terror. India's own experience is replete with examples of over-reaction and indiscriminate operations that have taken large sections of a particular community into their sweep and, in doing so, infinitely compounded the problem.

In Punjab, this is precisely what happened after Operation Blue Star, in the 'mopping up' exercise, Operation Woodrose, which sought to capture Jarnail Singh Bhindranwale's surviving associates and clear all gurudwaras in the State of extremist elements. The Army had been brought into Punjab only days before Blue Star, had little of its own intelligence on the ground, and was deeply suspicious of Punjab Police. Consequently, operating blindly, the Army arrested large numbers of people, many innocent, others merely sympathetic to the extremist ideology, but unconnected with terrorism, and pushed many young men across the border into the welcoming arms of Pakistani handlers.

This has been the experience in theatre after theatre of extremist violence across India, and yet, it seems, the lesson has not been learned. In the aftermath of the latest serial outrage in Mumbai, reports indicate that the police simply 'rounded up' over 300 'suspects' for 'questioning'. Worse, the media was provided access, and humiliating photographs of the detainees were published in some papers. Subsequent developments indicate that these detentions were, at best, shots in the dark, and were not based on any specific intelligence regarding involvement of these individuals in the crimes under investigation.

Rounding up hundreds of people in the wake of an incident must seem a strange way of policing to the general public. Unfortunately, it falls into a fairly established pattern of 'investigation', applied to all manner of crimes, where the known 'bad characters' of a particular area are arbitrarily detained and intimidated, cajoled or otherwise coerced, till someone spills the beans. This often works quite well, because there are certain classes of crime where the perpetrators are almost invariably drawn from a small pool of 'history sheeters'.

This practice is, however, disastrous when applied to terrorist crimes, particularly when the terrorists claim to represent a specific community, and more so where the state's agencies have themselves been substantially polarised and are perceived as not being fair. Over the past decade and more, it is the case that Mumbai Police has been significantly politicised and is widely regarded as being deeply communalised and partisan in many of its actions. This perception may be based on an exaggerated assessment of past deviations, but that does not significantly alter the fact that it is widely shared, particularly in the 'target community'. Under the circumstances, the stock response - to sweep with a big broom - will have particularly unfortunate consequences in Mumbai.

Broad based operations, such as combing operations, serve little constructive purpose except where there is definitive intelligence, and the agencies are sure that terrorists are present in a particular area. The Mumbai actions, it seems, were 'fishing expeditions', essentially operating on the principle, 'when you don't have a clue, start combing'.

Enforcement and investigative authorities do, of course, come under enormous pressure after each major terrorist strike to 'show results', and the electronic media has contributed immensely to this pressure. Twenty four hour news channels carry shrill reports, sometime within minutes, and certainly within hours of an incident, screaming "Police in the dark", "Investigators clueless", etc., and officers confronted with demands for the immediate identification of the perpetrators often feel that they have to say something. But results in any systematic investigation cannot be produced on demand. While people outside the enforcement, intelligence and investigative systems can legitimately speculate on the identity of perpetrators on the basis of past records and probabilities, these authorities must only speak on the basis of hard evidence recovered. The police and Government agencies must learn to resist the temptation to play to the galleries with statements on probable guilt, or with apparent action - such as the rounding of large numbers of 'suspects' - irrespective of media or political pressures. They must, furthermore, not try to grind other axes, or to 'clean up' a 'sensitive' area under the transient political and public sanction that is ordinarily extended in the aftermath of a major terrorist strike. All resources should be committed fully to the effort of identifying and getting to those who are actually guilty.

Regrettably, irrational practices appear to be embedded into the very structures of administration and policing in the country. I recall that it took years of continuous advocacy, even with the authority of the office of Director General of Police, to convince the establishment and my own officers to get the barricades removed from the roads in Punjab, and get the maximum available force into proactive duties. Yet, enormous components of police and paramilitary forces in violence-afflicted areas across the country continue to be wasted in unproductive static duties, even while the entire initiative continues to be vested in the forces of extremism.

Whether it is the war against Left-wing thuggeries, Islamist terrorism, or the ethnic fundamentalisms of India's North-East, the communities are the nation's assets. The war against terrorism is a war for legitimacy, a psychological war. No community is a 'natural' recruitment base for terrorists, and must never be abandoned. Across the country, the police, paramilitaries, Army, intelligence and national agencies and organisations have recruited from the very communities and classes that various groups of terrorists claim to represent, and from among whom the largest proportions of the victims of terrorism are often drawn. It is an unwise state and obtuse politicians that ignore these realities, and jeopardise the national interest and public security in the process.

K.P.S.Gill is former director-general of police, Punjab. He is also Publisher, SAIR and President, Institute for Conflict Management. This article was first published in The Pioneer.