A Snub To India?

Hardly. It would be incorrect to interpret that when Wen flew back to Sichuan to preside over an emergency meeting at the time of Pranab Mukherjee's visit, and cancelled the scheduled meeting, it was a response to the latter's remarks on Arunachal Pr 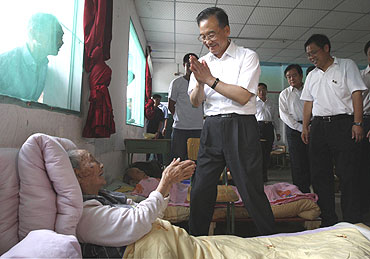 The after-shocks after the earth quake, which struck the Wenchuan area of the Sichuan province of China on May 12, 2008, and killed an estimated 70,000 people, have decreased in frequency, but the area still faces another major disaster in the form of massive floods if some of the so-called quake lakes formed as a result of the quake burst under the pressure of the accumulated water. The biggest of these quake lakes is the one at Tangjiashan, which has been causing concern to the Chinese authorities.

If it bursts, it could put in jeopardy the lives and livelihood of nearly a million Chinese living in the direction in which floods will flow and further damage the economy of a strategically important province of China. Sichuan is not only the granary of China, but is also rich in minerals. Many of China's nuclear and space establishments and defence industries are located in the province.

The Information Office of the State Council stated on June 8,2008, that China's industrial and mining sectors have lost an estimated $29.5 billion because of the quake. If there are floods now, the loss will increase further. According to figures released by the Ministry of Industry and Information Technology, 4,003 big companies have resumed production since the quake, but 1,482 enterprises are yet to do so. In case of floods, industrial production may receive a further set-back.

If the Tangjiashan quake lake bursts, two of Western China's strategically important railway line and oil pipeline may be washed away. The People's Daily reported on June 9,2008:

"The lake is also posing a threat to the Fujiang river bridge on the Baoji-Chengdu Railway, a critical part of the railway network in west China. The swollen quake lake has put China's longest oil pipeline at risk. The pipeline, winding from Lanzhou via Chengdu to Chongqing, was 60 kilometers downstream from the lake. With a capacity of transferring six million tons of oil each year, the pipeline provides 70 per cent of product oil to Sichuan and neighboring Chongqing Municipality. If the line was cut, refined oil in storage could only supply Sichuan for three days, whereas repair work would take 30 days."

A large number of civilian and military engineers, under the personal supervision of Mr Wen Jiabao, the Prime Minister, have been camping in the area and trying to drain off water from the Tangjiashan lake through a sluice canal created by the engineers. Water in controlled measure has already started flowing out through the canal, but it has started raining in the area. As a result, it is reported that the inflow of water into the lake is more than the outflow.

Under the heading "Quake lake still poses big threat", the China Daily News carried the following warning on the morning of June 9, 2008:

"Water in the Tangjiashan quake lake in Sichuan province was rising Monday despite the increased outflow through a channel.Increasing the outflow of water is critical for the dam's safety. If the water flows too slowly, the inflow will increase the pressure on the dam. But again, too voluminous an outflow can erode the diversion channel and cause the dam to collapse. A moderate rainfall around 6:50 pm was followed by a 4.8 magnitude aftershock a minute later yesterday (June 8). The tremors that lasted 20 seconds caused massive landslides on the surrounding mountains."

Since the quake occurred, Prime Minister Wen, who has won high praise not only from the Chinese but also from international disaster relief experts for the way he has organised the disaster relief, has spent more time in the quake-hit areas than in Bejing--occasionally returning to Beijing for a few hours now and then to attend to other work. His decision to fly back to Sichuan to preside over an emergency meeting at the time of the visit (June 4 to 7) of Shri Pranab Mukherjee, the Indian Foreign Minister, to Beijing, is, therefore, totally understandable. It will be incorrect to interpret his cancellation of the proposed courtesy call by Shri Mukherjee on him as meant to be a snub to him for his strong statements before leaving for China reiterating that Arunachal Pradesh is an integral part of India.

India has been sending relief material to Chengdu, the capital of the Sichuan province, by aircraft of the Indian Air Force (IAF). One of the aircraft reached Chengdu when Shri Mukherjee was in Beijing. He decided to fly to Chengdu, receive the material and personally hand it over to the Chinese authorities. This was a gesture not only to the Chinese people, but also to the Tibetans who live in large numbers in the quake-hit areas and have been affected by the quake. It is not known how many of the 70,000 people affected by the quake are Tibetans. The Tibetan-inhabited areas of Sichuan are claimed by the Dalai Lama as part of his so-called Greater Tibet, a claim strongly rejected by the Chinese. Before the quake, there were violent anti-Beijing incidents in the Tibetan-inhabited areas of Sichuan, but these have since stopped.

Sichuan has the largest concentration of Indian students---most of them studying medicine in the Sichuan University. They live mostly in Chengdu, which has not been affected by the quake.

'Do Not Allow Proliferation Of Sensitive Technologies Into Dangerous Hands'