'A Reaction To Every Action'

The newly appointed minorities affairs minister, when asked about UP minister Haji Yaqoob Qureshi, maintains that 'first of all, action should be taken against those who initiated the cartoons and then let us talk about the reactions'. He also says, 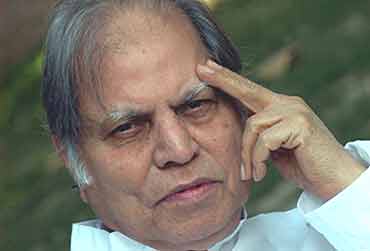 Full transcript of BBC Hindi Special Programme, Aapki Baat BBC Ke Saath with the minorities affairs minister on the latest cartoon controversy and the issue of death threats and awards.

Nagendar Sharma: In a democratic country like India, is it correct to issue death threats and whip up communal frenzy and passion in the name of protests against Danish cartoons depicting Prophet Mohammad?

A.R. Antulay: Well, Denmark is also a democratic country. Nobody can say that a dictatorship prevails there. If that country could give freedom to commit an act which has hurt the religious feelings of Muslims throughout the world, then that country should be ready to face protests also. A reaction can only be there in response to an action. First of all, we should look at the reason why all this started. Unfortunately, these cartoons and the cartoonist have given a bad name to Denmark throughout the world, and, in my view, all this was unnecessary.

Question from UP: Can anything be done in the name of freedom of speech and expression? Does this freedom give a licence to mock the religious feelings of others? Where does the limit of this freedom end?

Question from Rajasthan: Sir, while the Indian government appears to be serious on the cartoons issue, why is it not showing the same kind of seriousness in the matter of an Indian artist who has been regularly hurting the religious feelings of Hindus by depicting our deities? Is it not a clear case of Muslim appeasement?

A.R. Antulay: We are against hurting the religious feelings of any community, be it Hindu, Muslim or Christian. Let me take the name, since you are talking about M F Hussain. If any of his paintings has hurt our Hindu brothers, then he has committed a big mistake, he should not have done that. However, if I remember correctly, Hussain has apologised for this, and, in my view, after a public apology, the matter should end. That is why you cannot equate Hussain’s work with that of Danish cartoonists, as the cartoonist has not apologised so far.

Question from Ghaziabad: If Uma Bharti can be sent to jail for hoisting the flag at Hubli and Advani could face a trial in Babri Masjid case, why should the UP minister Haji Yaqoob Qureshi not be booked for inciting crowds on the cartoons issue? Why is the Centre silent on his statements? After all it is the Indian Constitution which prevails in the country and not the Islamic law?

A.R. Antulay: I think your comparative argument is not correct. However, in your view if you think that there have been double standards in dealing with different sets of people, then for your grievance redressal you are free to approach the court. You can file a public interest litigation in either the High Court or the Supreme Court. Before pointing a finger, one should see what are we doing ourselves as responsible citizens.

Nagendar Sharma: But, Mr Antulay, if we are assuming that the publishing of cartoons was wrong, then we should also in the same vein admit that the language used by Uttar Pradesh Minister Haji Yaqoob Qureshi was certainly wrong. Two wrongs do not make a right, do they?

A.R. Antulay: There is a reaction to every action. If the action taken, in this case the publishing of cartoons, was wrong, then the reaction would depend from individual to individual and also on the attitude of the individual. Everyone wants to show how hurt they are. Now about the reaction, in terms of speech, first of all it should be seen how this all started. What was the need to publish and circulate such cartoons and start a chain reaction of protests in the world? So first of all, action should be taken against those who initiated the cartoons and then let us talk about the reactions.

Question from UP : What is the reaction of the central government to the Best bakery case judgement and what happened to the election promise of Congress party that it would ensure justice for Gujarat riot victims?

A.R. Antulay: I welcome the judgment and congratulate Ms Teesta Setalwad. She fought this big battle as a one woman army. She has done the people of India, particularly the women of the country, proud by her relentless battle. Teestaji has enhanced the prestige of Indian women in the world, the way she waged this struggle. This judgement has helped in restoring the faith of Indian public, not only Muslims, in the judiciary. Previous judgements in this case had led to large scale disappointment among the law abiding citizens of the country, and apprehensions were being expressed about the judicial system as well. I think Teesta Setalwad has done a favour to the country’s judiciary too. Congress party is sincere and committed to its electoral promises. There should be no scope for doubt in this. The government is elected for five years, and all promises cannot be completed in a year’s time.

Nagendar Sharma: But at the moment there seem to be no concrete indications that the UPA government is serious in combating communalism, despite this having been one of the major electoral planks of both Congress and the Left parties.

A.R. Antulay: Within a year and a half of coming to power, the UPA government has set up a separate ministry for minorities welfare. This has happened for the first time in our country. Pervious governments did not think about it or, even if they thought about it, they could not muster the courage to set-up a separate ministry. This should be treated as the first step in the direction of restoration of trust among the minorities. Not only for Muslims of Gujarat, be it in any part of the country. I am talking of minorities as a whole -- for example Hindus are a minority in J&K, Punjab and many parts of the North East, and  so are the Christians. I mean whichever minorities are there ... In my view Jains are also a minority. If need be, we would issue a notification giving them minorities status. We are committed to provide justice to any minority community and the creation of this ministry would act as a single window with a clear perspective for justice and to remove all hurdles.

'This Is A Dialogue Of Equals'