With another six phases to come, it would be premature to arrive at any definite conclusion on the trajectory of elections and their aftermath in J&K. Some satisfaction can, nonetheless, be derived from the fact that the run-up to the first phase has 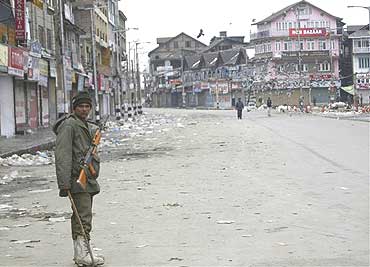 The seven phase Assembly elections in Jammu and Kashmir, starting November 17, are taking place in the backdrop of the extended Shri Amarnath Land agitation, which impacted dramatically on both sides of the Pir Panchal. Adding to administrative and security concerns in the state are the frequent ceasefire violations by Pakistan across the Line of Control (LoC) and international border. Authorities fear that firing from across the LoC and international border will escalate during the protracted polling process that will continue till the results are declared on December 28.

In the first phase of polling on November 17, there were 10 assembly constituencies spread over four districts of Jammu and Kashmir (J&K). Of the 1,038 electoral booths in the Bandipora, Poonch, Leh and Kargil districts for which elections were held on November 17, more than half of them have been described as 'hyper sensitive' while the rest have been placed under 'sensitive' category. While over 600,000 people were eligible to cast their franchise on November 17, the remaining electorate in 77 constituencies will vote in six phases on November 23 and 30 and on December 7, 13, 17 and 24.

The past year has witnessed many intrusions from across the LoC and border both in the Jammu and Kashmir divisions. The United Jehad Council, a conglomerate of 17 terrorist groups headquartered at Muzzafarabad in Pakistan occupied Kashmir, and headed by Hizb-ul-Mujahideen chief Muhammad Yusuf Shah aka Syed Salahuddin, has given a call for a boycott of the elections, which creates an imminent danger of terrorist violence against candidates contesting and people participating in the election process. 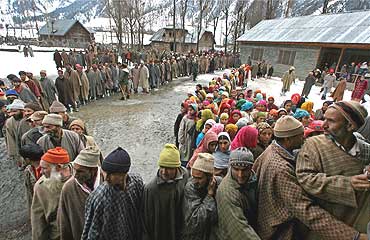 Commenting on elections in J&K on Oct 21, 2008, at Islamabad, Yusuf Shah declared that United Jihad Council fighters were ‘sparing’ areas where Kashmiris were rallying behind the election boycott, but "we continue targeting Indian army camps and the border areas."

J&K continued to witness a decline in terrorism related violence through 2008, a trend that settled in after the peak of militancy in 2001. Total fatalities in 2008 were 490 (up to November 3), as against 777 in 2007 and 1116 in 2006. Nevertheless, efforts to push militants across the border from PoK continue, with at least five violations of the ceasefire between India and Pakistan coinciding with infiltration attempts. Two of these were successful, with the militants cutting the fence and taking people hostage at Chinore and Samba. The infiltrators were eventually killed in encounters, but not before three civilians, including a photojournalist, and a soldier were killed in Samba; and seven civilians were killed in Chinore. The present elections, consequently, will be played out under the continuing spectre of extremist violence and a boycott at least selectively imposed by militant fiat.

Articulating these apprehensions, the Director General of J&K Police, Kuldeep Khoda, said on November 15 that there was a possibility of militants attempting to disrupt the poll process, even though militancy-related violence in the state has declined by 40 per cent over the last year. "There have been grenade attacks by the militants in the last few days and we have got inputs indicating that they are not totally silent," Khoda said. He also said that campaigning passed off peacefully in all the ten constituencies for which elections were held on November 17.

Against this backdrop, the electoral scenario remains murky. In Jammu, the battle lines are drawn between the main contenders: the Congress and Bharatiya Janata Party (BJP), though other regional contenders such as the National Conference and Jammu and Kashmir Panthers Party (JKNPP) are far from weak and have the capacity to upset electoral calculations. In the Kashmir Valley, on the other hand, the National Conference (NC) appears to have secured a dominant position, with the Congress apparently reluctant to expand its base and the Peoples Democratic Party (PDP) seen as a double agent playing both sides. The sparsely populated Ladakh region, which accounts for just four seats in the 87 strong Legislative Assembly is largely dominated by the Ladakh Union Territory Front and National Conference. 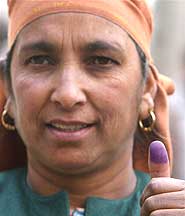 The Amarnath land controversy has created a deep impact on the hitherto unchallenged and overwhelmingly hegemonistic Valley politics. An undercurrent of psychological hurt and insecurity increasingly influences the political discourse, undermining possibilities of success for the poll boycott call by the separatists. People in the Valley are seeking an effective presence in the Assembly to upset and counter the probable unity in Jammu.

According to a government spokesman, following the announcement of poll schedule for the state on October 19 and beginning of the process of making nominations for the first four phases, 862 political meetings have been organized across the state by November 12, with 406 of these taking place in the Kashmir Division and 456 in Jammu division respectively. While 197 meetings had been held by the NC so far, the Congress organized 178 such meetings. The PDP followed with 166 workers meetings while the BJP organized 63; the BSP with 45, the NPP 41, and the PDF, 24. A number of independent candidates also organized 56 rallies and workers meets across the state. 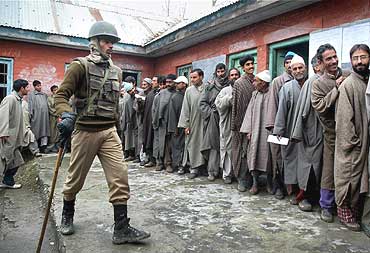 The poll boycott call by the two factions of the separatist All Party Hurriat Conference (APHC) and Jammu and Kashmir Liberation Front (JKLF) is part of the strategy to delegitimize the election process and at the same time exert pressures on the participants to remain amenable to separatist sensibilities. In the 2002 elections, both factions of Hurriat Conference had extended behind-the-door supported to the PDP while maintaining a boycott posture. At that time, the transfer of votes to the PDP resulted in the downsizing of the NC as the all-pervasive party in the Valley. It also created an alternative political pole flirting with soft secessionist agenda and exerted marked pressures towards a competitive secessionist agenda. Separatist pressures accomplished a virtual capitulation by the PDP, which declared that its new government did not have a representative role, but only a role to act as an ‘interface’ between separatists, India and Pakistan. Even as the PDP secured power through the polls, consequently, it was able to engineer the delegitimization of the electoral process, at least in the eyes of separatist rank and file.

The goals in the present election have not changed, but the PDP appears to have fallen drastically in esteem among the separatists. All significant separatist formations have expressed a lack of confidence in the PDP from time to time. The exposure by the Ghulam Nabi Azad-led Congress government regarding the role of the PDP in the Amarnath land transfer have undermined the party’s credibility in the Valley.

The NC, after its defeat in 2002, has sought to occupy the PDP’s political space this time around, with communal stridency dominating its campaigns and postures. The NC has executed an about turn and now supports trilateral talks, demilitarization and unconditional dialogue with terrorist groups and their state supporters, relentlessly seeking to portray itself as the real protector of Kashmiri aspirations. This would incline to reduce the PDP to a South Kashmir-centric political formation impeding the balanced development of the Kashmir region. The Amarnath land issue and the involvement of PDP in the land transfer to the Shri Amarnath Shrine Board (SASB) provided the NC with the required ammunition to project the PDP as an agent of the Centre and a traitor to Kashmiri aspirations.

Understandably, the PDP was canvassing for the postponement of Assembly elections in J&K, desperately seeking more time to bridge its distance with the separatists constituency and to allow people to forget its role in the land transfer row. Through the release of its ‘Self-Rule Document’, the PDP sought to unsettle the NC’s Greater Autonomy plank, but has failed to sell its proposals as a better proposition than the NC’s scheme. In sum, the separatists appear to have increased the scope of secessionist mobilization through ‘mainstream’ political parties, even as they continue with their boycott postures. 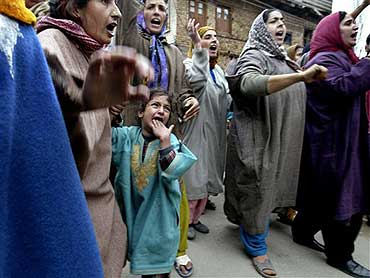 There is an effective third force emerging in the Valley with former Minister and PDP rebel Ghulam Hassan Mir declaring the formation of his new Jammu and Kashmir Democratic Party Nationalist (JKDPN). Mir has demonstrated a knack for keeping himself alive on the margins of the stiff competition between the PDP and NC, and has now emerged as a significant alternative for people fed up with the militancy and the competitive communalism of the NC and PDP. There is also significant talk of pushing a number of independent candidates into the Assembly with separatist support.

Several attacks against candidates have already occurred to impose the separatist boycott, but these have basically remained selective. Attacks have been orchestrated both by separatists and by the militants. For instance, on November 12, a NC candidate Mubarak Gul escaped an attempt on his life by militants in the M.R. Gunj area of capital Srinagar, the first such attack on any political leader after elections were announced on October 19. Gul, a three-time legislator, was visiting an ailing NC worker, Mohammad Yousuf Bhat, when militants hurled a grenade towards Bhat's house. Earlier, in the first attack after the election was announced in J&K, militants on October 31 attacked a Police Station in Baramulla town, injuring 13 police personnel. Further, according to Police sources, unidentified persons set fire to the granary stores and band saw mill of six senior political workers, including one Congress and five NC workers, in Hajin Village in the Bandipore Assembly constituency. Given the overall structure of the electoral process and delimitation in the state, with its bias in favour of Kashmir, the boycott call can, however, be seen as little more than an exercise to undermine the legitimacy of the polls, rather than any attempt to effectively prevent participation. The actual objectives of the separatists remain far more complex, and include the securing of a proxy presence in the Assembly, both through mainstream parties and independents.

In Jammu, political calculations after the Amarnath agitation have gone haywire. Far from leading to a consolidation of the vote, fractures have deepened. The catalyst for this process of disintegration has been the stiff battle between the Shri Amarnath Yatra Sangharsh Samiti (SAYSS) and the Bharatiya Janata Party on the future course of action to be adopted. The BJP prevailed upon the Sangh Parivaar to allow the Sangharsh Samiti to fade away, rather than to emerge as a regional formation in Jammu. The creation of the Jammu State Morcha in the last elections was projected by the BJP as the principal reason for its dismal show, and the Sangh Parivaar accepted that any prominence to the SAYSS would undermine the BJP’s prospects. But the marginalization of the SAYSS dissolved the political focus which had mobilized large masses of the people against. Far from capitalizing on the environment generated by the Amarnath agitation, consequently, the BJP has allowed these focused energies to be frittered away, denying space to the emerging leadership in Jammu, which had garnered tremendous support during the agitation. The consequent advantage would accrue, necessarily, to the Congress. The absence of unambiguous postures on the Amarnath issue (indeed, the avoidance of this issue during campaigning) by the mainstream parties in Jammu has, moreover, created wider spaces for independent candidates.

These are, however, early days in the protracted poll process. With another six phases to come, it is would be premature to arrive at any definite conclusion on the trajectory of elections and their aftermath in J&K. Some satisfaction can, nonetheless, be derived from the fact that the run-up to the first phase has been relatively peaceful.