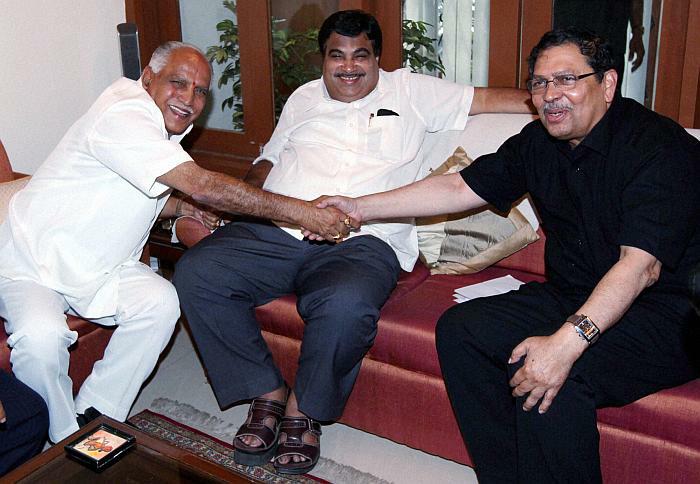 The Karnataka Lokayukta, Justice Santosh Hegde, has been berated by a section of the 'secular' press and public for withdrawing his resignation at the instance of BJP leader L K Advani. Their argument and anger is simple: Should Hegde, who emerged as a people's hero and had acquired a rare moral authority over those in power, have accepted the counsel of a person who pursued 'divisive' politics all his life? Isn't Advani tainted in the Babri Masjid demolition case? When Hegde had developed such mistrust about a politician, should he have allowed another one to sway him? Despite a silly rhyme, a Kannada writer put it across succinctly: "By taking a step forward Justice Hegde would have been JP (meaning Jayaprakash Narayan), but, by taking a step backward he has now become BJP."

Although I understand this position, I feel this was not the most important charge that one had to bring against Justice Hegde. This is only a simple 'crime' of association. Again, this qualifies as a 'crime' with only those who have a different ideological persuasion. In effect, this charge may not stand the scrutiny of an impartial trial. All said and done, there are people who admire Advani and are supportive of his brand of politics. After all, he and his party have been a part of our vibrant democratic ethos for decades. But yes, I do agree that Advani is no Mahatma Gandhi.

What then should have been the charge? It was first necessary to recognise that Hegde held an important constitutional position and by law had to uphold its independence. He had a quasi-judicial role to play and was vested with statutory powers. In spirit, the office of the Lokayukta was assigned to keep the conscience of the state. Besides looking at corruption, it was also required to ensure good governance to people. All this implied that the man who occupied the chair operated with a deep sense of integrity, independence and impartiality. In fact, a person chosen as Lokayukta should have either been a Supreme Court judge or a High Court chief justice as, by training, these learned people try to place justice above everything else, especially ideology, politics, emotion and of course relationships. If one were to use our films as a touchstone, the popular construct there is of an upright father, on the seat of justice, indicting his own son without actually worrying about its future consequences. The suffering will come later, but in the courtroom he keeps a stoic face and does not allow his voice to choke. This indicates that there is a notion of extreme idealism in the minds of the people when it comes to those connected with justice.

Hegde appeared like a textbook case of this lofty idealism until he allowed his emotion to betray him on that fateful Saturday. He went ahead and made it public that he was withdrawing his resignation because a 'father-like figure' had asked him to do so. Further, he admitted that he came under pressure because Advani was "close to his heart". Now, how correct is it for a constitutional authority to say he was swayed by a personal relationship to do something? Advani had been Hegde's client during the Emergency; his father K S Hegde's colleague in Parliament and also in the BJP; it was the NDA government, of which Advani was a part, that had made Hegde the Solicitor General of India and then a judge of the Supreme Court in 1998 and 1999 respectively. Moments before Hegde withdrew his resignation, these very facts had gone in his favour. He was seen as someone who could push aside this history to take an independent decision because his principles were in peril. But after 5.30 PM on July 3, everyone knew he was walking on emotional crutches. He had for a moment forgotten that he still held a constitutional chair and there were institutional values at stake. To say the least, he had committed a gross impropriety. He had not even demonstrated patience to meet the governor before he announced his decision. Hegde later seemed to have realised his mistakes. He apologised. But all of that came only as an afterthought. The damage had been done and he had been dwarfed. His martyrdom and his victimhood had all been erased in a jiffy.

What was it that compelled him to announce his withdrawal in such a tearing hurry? Has rushing to the press become a habit with him? Why did he allow Nitin Gadkari, the national president of the BJP, and the chief minister to flank him when he made his announcement? Couldn't he tell them that being a constitutional authority, it would send a wrong message across to the people, especially if he stood next to the president of a political party? Couldn't he muster the courage to tell Advani that he would have gladly considered his request had he dialled him a few days earlier, but now too much water had flowed and a lot of words had been exchanged? Didn't he realise that Advani was after all trying to save his party and his government at the cost of Hegde's well-earned reputation? Why did Hegde even agree to meet chief minister Yeddyurappa, who till the previous day had stoutly refused to ask him to stay back and had even allowed a couple of his cabinet colleagues to taunt him in public? How could Hegde forget all the insults? Insults that had been piling up like government files over the last couple of years. Did Hegde forget that only a couple of months ago the chief minister had to literally gag his colleagues and officers from taking potshots at the institution of the Lokayukta? How could anybody possibly reconcile with these disparate aspects? Yeddyurappa perhaps knew Hegde's weakness. He had his 'brahmastra' ready if things went out of hand and he used it diligently on July 3 by getting Advani to make the call.

The implications of Hegde’s decision do not stop with these questions. The graver ones lie ahead of him. They are reserved for the remainder of his term. If tomorrow he unearths a major scam that will shake the very existence of the government, will he stop short of publishing it if his father-like Advani, or someone close to his heart, shakes his will? Mind you, the mining story is not over yet. Hegde is planning to submit his second and final report soon. Can he expect the people to take this report as seriously as they took the first one? From now on, will they read motives to all his actions? Will he ever be perceived again as autonomous and independent?

Frankly, Hegde's position has become untenable now and he alone is responsible for that. Isn't it true that even if he is denied the additional powers he has been demanding for long, he'll have to still quietly continue in office? If he decides to resign again wouldn't it turn out to be a farce? Hegde had a subdued tone of surrender in a media interview on 8 July: "I am not confident about it [additional powers] at all. I'll work with whatever powers there are." Willy-nilly hasn't Hegde allowed the politician, against whom he had spewed such venom, to triumph at the end? He had said that people of the BJP came from "muck," like their symbol lotus that "grows in muck." Have they thrown a bit of that muck at the Lokayukta?

Interestingly, I met a top BJP leader for a chat at the Taj Westend the same evening that Hegde withdrew his resignation. He could barely contain his glee when he told a party colleague who had called him from Delhi that they had "successfully handled" the Lokayukta crisis.