A Job Half Done

Indian hockey has lamented wasted opportunities at the start of major tournaments for several decades. The same story was repeated in the opening contest against Germany, where the team came close to the country's best start for a long time. 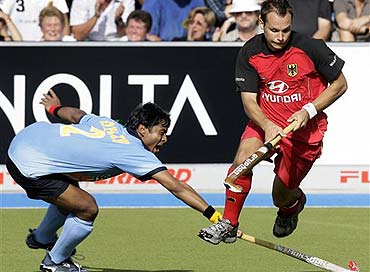 Indian hockey has lamented wasted opportunities at the start of major tournaments for several decades. The same story was repeated in the World Cup's opening contest against Germany, where the Indian team came close to the country's best start for a long time.

The agonising last-minute goal that India conceded put paid to hopes of splitting points after trailing twice in the match that marked some fine ball-interception by our players.

It was disheartening the way India conceded the decider after a credible show. Adding to the pain of losing a match that we ought to have drawn was in watching German striker Moritz Fuerste create so much space while penetrating the Indian defence from the left flank to set up the decider for Christopher Zeller.

I would like to believe that our defenders ought not to have found it too difficult to block that last move after giving a fine display.

India need to pay more attention to strengthening the defence as most teams these days possess one or two exceptional strikers who are capable of producing an extraordinary goal if the defenders lapse in concentration even for the tiniest moments.

Traditionally, an India-Germany contest is always a close encounter, and that belief was underlined once again by this contest. One last-minute lapse in negotiating a German move wasted all the good work of the evening.
Losing the first match will put India under pressure for the rest of the tournament.

Securing a point in the opening outing, and that too against the reigning world champions, who also happen to be the hosts, would have been a tremendous boost.

A draw would have given the team some breathing space in the preliminary pool that also features Champions Trophy holders the Netherlands and Asian Games champions South Korea.

South Korea's stunning 3-2 victory over the Dutch, who are by far the most successful men's hockey nation during the past decade, is an indication of the challenge confronting the Indians in their remaining games.

The Germans are always looking for dominating ball possession. Their game is built around holding the ball and then as the game progresses they build pressure on the rivals.

Although both teams were tentative and over-watchful in the first session, we allowed the Germans the luxury of holding the ball through mid-field possession.

The Indian players should have come out to attack more often in the first session itself. That would have put the German defence under some pressure and disrupt the way they wanted to play.

The most pleasing moment for me was the manner in which India scored their second goal and bounced back to a 2-2 parity six minutes from the hooter.

Who would have thought that the famed German defenders, who hold off the best attackers in the world, would be outwitted and left dumbstruck through a string of short passes featuring Shivendra Singh and Gagan Ajit Singh.

Western Railways boy Shivendra's display was a heartening feature on his World Cup debut. Not overawed by the occasion, he showed how opportunist strikers can transform the destiny of a team.

Scoring his second goal against the run of play, Shivendra's field goal should have spurred the Indian team in this tournament, but the focus will now be in ensuring that the players' morale is not shattered.

What did not present a pleasant picture was to watch the second German goal by Oliver Hentschel through a penalty corner variation that had the Indian defenders stunned.

They seemed baffled at being wrong-footed after focusing entirely on rushing out to block Zeller, who had earlier placed his drag-flicked penalty corner shot into the goal.

The Germans will always come up with several variations in executing their penalty corners.

A job begun well is half done, and the Indian team was close to starting with a draw that would have given them a tremendous boost. Now, we've been left ruing bad luck and fighting with our backs to the wall.