The monarchy is part of the problem in Nepal, it can hardly be a part of the solution to the present crisis. Indian policy urgently needs to relate itself to the grass roots and popular forces. Such forces include the Maoists. 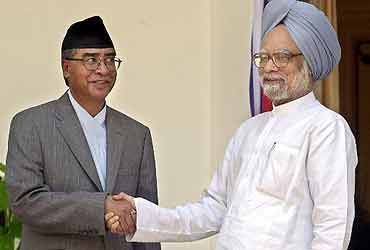 Nepalese Prime Ministers generally prefer to call on New Delhi for their first foreign visit after assuming office. The urgency for Prime Minister Sher Bahadur Deuba's visit was, however, accentuated by nearly a week-long effective blockade of Kathmandu imposed by the Maoist insurgents.

That week exposed the vulnerability of the Deuba government and its capacity to govern. India sent strong signals to assure Kathmandu that it would not allow the Nepalese state to collapse. Foreign Secretary Shyam Saran's unusual detour to Kathmandu Airport, on his way to Myanmar, during the period of the blockade, appeared to have convinced Deuba that it was time for a serious discussion with his Indian counterpart on the Maoist  challenge.

On leaving Kathmandu for New Delhi, Deuba described his journey as a 'goodwill visit'. He brought along a large entourage of 66 members drawn from various walks of life, including business and tourism. The most thinly (or even non-) represented sections in his delegation were the home and defence ministries as well as the Royal Nepalese Army (RNA), though his core concern was the Maoist insurgency.

Other issues in his agenda included discussion on projects to harness water resources, the problem of Bhutanese refugees, and visits to temples and holy places in India. There was strong criticism of his visit not only from customary political baiters like the Nepali Congress President Girija Prasad Koirala, but also from members of his coalition government and civil society representatives.

He was warned against signing any major agreement with India and was even asked to raise some of the major irritants in relations between Kathmandu and New Delhi, including the revision of the 1950 Treaty that define the basis of Indo-Nepal relations, and the question of alleged border encroachments by India.

India has preferred to treat the five-day tour as a working visit, and not as a state visit. There were no delegation level discussions with the Prime Minister, nor any state banquets or lunches. All the official discussions with the Prime Minister and the Ministers of Defence, External Affairs, Home and Water Resources were wound up only in a day and half.

In between, Deuba also had time to call on the President and meet with other Indian leaders, such as Sonia Gandhi, President of the Congress Party, and L.K. Advani, the Leader of the Opposition. He also had a private dinner with Indian intellectuals and sympathizers. Agreements on culture, sports and exchange of weather information were signed during the visit.

On the core concern of the Maoist insurgency, Deuba got all the assurances he was looking for. India described the Maoists as a "common security concern" and pledged "every possible help, military or otherwise". India's worries arise on account of the Maoists' close and growing links with Left Wing extremist insurgents (referred to as Naxalites) in India, and the increasingly strident portrayal of India as an expansionist neighbour by the Nepalese Maoist Chief, Pushpa Kamal Dahal @ Prachanda, as well as attacks on Indian business interests in Nepal, along with attacks on enterprises with Royal and American stakes.

Deuba's shopping-list of military hardware was considered sympathetically in New Delhi, and transfer of equipment, including Advanced Light Helicopters (not mounted with guns, but to carry troops) was confirmed. India has also agreed to train 400 to 500 Nepalese police personnel in counter insurgency operations.

The setting up of a Joint Committee to monitor the security situation and suggest appropriate measures was 'noted' by the two sides. India assured Nepal it would take all possible steps to coordinate legal actions to deal with the terrorist problem, but ongoing discussions on an Extradition Treaty could not be concluded.

The Nepalese side is keen to ink an extradition arrangement, as they want to get hold of some top Maoist leaders under detention in India. Both the sides agreed that they would not allow their territories to be used against each other, implying that, while India would tighten its border security to deter the movement of Maoists across the border, Nepal would also do every thing possible to curb the activities of Pakistan's Inter Services Intelligence (ISI) aimed at fuelling cross-border terrorism against India.

Besides providing security support, India also tried to impress upon the visiting Nepalese Prime Minister that military means to address the Maoist challenge were not sufficient, and that steps would also have to be initiated to seek a 'negotiated political solution' of the problem. This Indian message was not only communicated in one-to-one meetings at the higher political level, but was also made public in the Indian Foreign Secretary's Statement on September 10.

The significance of this position lies in the fact that the RNA and the Nepalese establishment do not favour any talks with the Maoists at present, for fear that this may give the impression that the RNA was succumbing to Maoist pressures, since the rebels clearly have an upper hand at the moment. In these one-to-one discussions, the Indian side also appears to have discouraged Deuba from accepting any third party role in the peace process with the rebels. The Maoists have favoured international mediation in talking to the King directly. They have refused to talk to the Deuba government as this is 'neither a legitimate nor a credible government' from their point of view.

Many international third parties, including the United Nations, have shown interest in acting as facilitators or mediators for talks between the Nepalese government and the rebels. Switzerland and Norway are the latest candidates volunteering such a role. India's apprehensions, not without reasons, are that the third parties will complicate the Nepalese conflict without having any capacity to discipline either of the parties from betraying good-faith.

On the whole, Deuba has expressed great 'satisfaction' on the outcome of his India tour. Discerning Nepalese observers, however, are of the view that, for some military goodies, political assurances, advice on seeking a 'peaceful solution' and caution against the role of third parties, their Prime Minister did not have to travel to New Delhi. All this could have been obtained through normal diplomatic channels.

Their contention is that the real purpose behind Deuba's visit was to get political support for his own continuation as Prime Minister. There were rumours - and rumours have considerable political significance in Kathmandu - that, following his government's failure during the Kathmandu blockade, the King, while relaxing at his private resort in Pokhara, was having second thoughts on Deuba's Prime Ministership.

Differences of approach are also crystallizing. Deuba has set up a 'Peace Secretariat', with American support, but the King and the Army do not want any dialogue with the Maoists, at least for the time being. Further, the United Marxist Leninists (UML) of Nepal are Deuba's coalition partners in the government, but they are breathing heavily down the Prime Minister's neck. Perhaps the political pilgrimage to New Delhi could help Deuba somewhat in easing his crisis of self-confidence.

There are no signs that Deuba's visit to New Delhi would deter the Maoists from mounting further pressure on Kathmandu. Just a couple of days before Deuba's departure, they had warned 35 business establishments to cease operations. In the meanwhile, they bombed Malla Hotel in Kathmandu (close to the Royal Palace) and Fishtail Hotel in Pokhara. And on the day Deuba concluded his official engagements in New Delhi, they blasted the American Information Centre complex in Kathmandu.

The Maoists, it seems, are on their 'strategic offensive', the penultimate stage in their 'peoples' war' strategy. Their war on the Nepalese state is definitely being expanded from the rural theatre to urban centres. Their front organizations are displaying robust competitive initiatives in destroying the credibility of the monarchical order by attacking businesses and public structures. The explosion at the American Centre on the eve of the 9/11 anniversary may alarm terrorism-watchers about the possibilities of their developing links with Al Qaeda affiliates.

No matter how well India equips the Nepalese security forces, they are far away from being capable of dealing with the Maoists. India's own experience in the northeast and in Naxalite affected regions is that military methods may, at best, help, but cannot deliver a solution to internal revolts and insurgencies.

India is now planning a co-ordinated political strategy for all the insurgency affected states of the union. It must, therefore, seriously pursue a similar approach in Nepal, as indicated during Deuba's visit. Towards that end, Indian policy will have to break from the legacy of supporting the Monarchy as the symbol of order and stability in Nepal.

The Monarchy is part of the problem in the Himalayan Kingdom, it can hardly be a part of the solution to the present crisis. Indian policy urgently needs to relate itself to the grass roots and popular forces. Such forces include the Maoists. India should therefore work with Nepal towards redefining its political order so as to help the rebels shed their arms and violent methods for a respectable and democratic place in the mainstream of Nepali national politics.

Class War On The Hoof