To compare China's behaviour towards Tibet with Indian treatment of Jammu & Kashmir or Nagaland, as Praksah Karat did, is to belittle Indian democracy and insult the country. 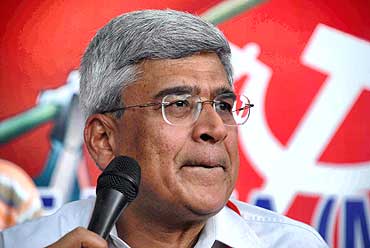 Be warned! Supporting the Tibetan cause or commiserating with the Dalai Lama and his followers would only encourage secessionism in various corners of India, primarily in Kashmir and parts of the Northeast. This, in effect, is what a poker-faced Prakash Karat said on the sidelines of the 19th Congress of the CPI(M) at Coimbatore. Indians who support the Tibetans, Karat argued, ought to be prepared to concede separatist demands within the country.

His exact words: "Those in India who want to join this chorus for an independent Tibet will be doing a great disservice to our own country. Are we going to support a free Nagaland? Or a free Jammu and Kashmir? Or those other secessionist demands?"

Karat is, without doubt, a learned, well-read and intelligent man. He's expected to speak and argue logically on the basis of hard facts. But this is precisely what he didn't do while speaking to reporters on Monday: by trying to draw parallels between the Tibetan struggle and the insurgency or even terrorism in Kashmir and parts of the Northeast, the CPI(M) general secretary deliberately obfuscated facts and advanced a totally flawed and warped argument.

And the facts are these: the Dalai Lama (symbol of the Tibetan struggle) has long ago given up the demand for a free and independent Tibet and has repeatedly acknowledged that Tibet is an integral part of China. All that Tenzing Gyatso wants for his people is greater autonomy that'll include freedom to practice their religion and preserve their culture, language etc. This is as far removed from secessionism (or 'splittism', as Beijing terms it) as the CPI(M) is from the BJP.

To equate the demands for religious and cultural freedom by the Tibetans with those of secession (from India) by Kashmiri separatists or North East rebels amounts to twisting facts and spreading lies and would eminently qualify for being labeled as a profoundly unpatriotic act.

There can, indeed, be no parallels between the situation in Tibet and that in J&K or the Northeast. India has never 'colonised' Kashmir or the North East by pushing in millions of Hindi-speaking 'mainlanders' into these regions as the Chinese have done by swamping the ethnic Tibetans with Han Chinese since the early 1960s. India has never pushed for a one-language policy in Kashmir or the Northeast; China's promotion of Mandarin as the only language to be taught in schools has led to most Tibetans not knowing or learning their mother tongue.

People of Kashmir, Assam, Nagaland, Mizoram or, for that matter, any state in the country, happily learn, speak and sing in their own languages and dialects and India promotes and celebrates it and actively encourages development of all languages. India has never curbed religious freedoms in any state, including Kashmir. China wanted to obliterate Buddhism and when it failed to do so, imposed its own brand of the religion on Tibetans and foisted its lackeys as religious leaders.

The Governor of Tibet may be a Tibetan, but the head of the Communist Party of China in Tibet is a Han Chinese, who outranks the Governor and wields real power. India has never denied basic human and Constitutional rights to its minorities as a matter of state policy like China does. To compare, thus, Tibet with Kashmir or Nagaland is to belittle Indian democracy and insult the country.

Yes, many mistakes and excesses have been committed by successive government at New Delhi, and security forces, in Kashmir and the Northeast; a series of blunders ranging from the arrogant dismissal of the democratically elected governments, to random killings and rapes by security forces and the step-motherly treatment and dismissive attitude towards the Northeast have only served to alienate large sections of the people of these regions. But, by no stretch of imagination, can the situation obtaining in Kashmir and the North east be compared to that in Tibet. The most important reason being that India is a democracy and China is not. People of Kashmir and the Northeast, or any disturbed region in the country for that matter, exercise their inalienable right to vote. And elections in India, despite many shortcomings, are free and fair and can never be compared to the sham that passes for polls in China.

There is no way Karat is unaware of these vital distinctions. But that he chose to gloss over them speaks volumes for his choice of loyalty to ideology over his motherland. Karat and other Communists may well argue that communism advocates a 'stateless' world where political boundaries get erased to coalesce nations into one great socialist order. But do China's communists also subscribe to the same view and utopia? Isn't their country more important to them than their ideology? Hadn't it been so, why would China's ruling communists be so relentless in pursuing a policy of containment of India? Why do China's communists then lay claim to lakhs of square kilometres of Indian territory? The point is that Karat and his fellow communist travelers in India are doing their country a great disservice by defending and promoting China's cause.

China's harsh treatment of Tibet--the vilification of the Dalai Lama, the denial of religious, cultural and other democratic rights to the ethnic Tibetans, the deliberate demographic engineering that involved settling millions of Han Chinese in Tibet, repression and oppression of the Tibetans, and denying them avenues of social and economic development--is what led to the simmering anger that burst forth a couple of weeks ago in various parts of Tibet.

In stark contrast, Kashmiris and Nagas (the two minority communities Karat named) are prospering not only in their respective states, but in other parts of India where they've settled down. Rather, it can be argued that China played a major role in fanning unrest in the Northeast and Kashmir. Thuingaleng Muivah was hosted by Zhou En-Lai and the NSCN (I-M) was provided military, material, logistic and all sorts of support by the People's Republic of China; other insurgent groups in the region like Manipur's PLA and Mizoram's MNF also received similar support from Beijing. China actively encouraged Pakistan to sponsor militancy in Kashmir valley and even bankrolled Islamabad's 'bleed-India-from-a-thousand-cuts' policy.

Now, arguing (as Karat and his ilk do) that India also provides shelter and support to the Dalai Lama is puerile and obnoxious; the Dalai Lama is a recipient of the Nobel Peace Prize (can Muivah or Geelani be contenders?) and is one of the strongest advocates of non-violence in this world. The Dalai Lama is a noble soul and acknowledged as such by all free people of this world. Branding him a militant (as China does and Karat faithfully repeats) is to insult the intelligence of every human in this world.

The Dalai Lama has repeatedly urged his people to abjure violence and has expressed distress at the bloodshed in his homeland. He has always acted as sobering influence on many of his young followers whenever they displayed any inclination to take to the path of violence. Such a towering personality cannot be compared to Muivah or a Kashmiri separatist. Karat ought to have had the decency to acknowledge this instead of abjectly surrendering his intelligence and senses to his ideological masters in Beijing.

P.S. Karat, when asked about Indian ambassador to Beijing, Nirupama Rao, being woken up and summoned to the Chinese foreign ministry at 2 am (to receive a protest note on Tibetans sneaking into the Chinese mission in New Delhi, and also, reportedly, over the vice president Hamid Ansari's later cancelled meeting with the Dalai Lama), said with a crooked smile that he was "not well-versed in diplomatic practices". Had our envoy in Washington been subjected to similar outrageous and humiliating treatment, would Karat's response have been the same? And it's not only Karat--all our politicians, by failing to condemn this unacceptable act of the Chinese in the strongest language, have also done India a great disservice. This single episode has projected India as a pusillanimous state lacking in self-respect that can be insulted and pushed around at will.

'Olympic Games Do Not Belong To China'